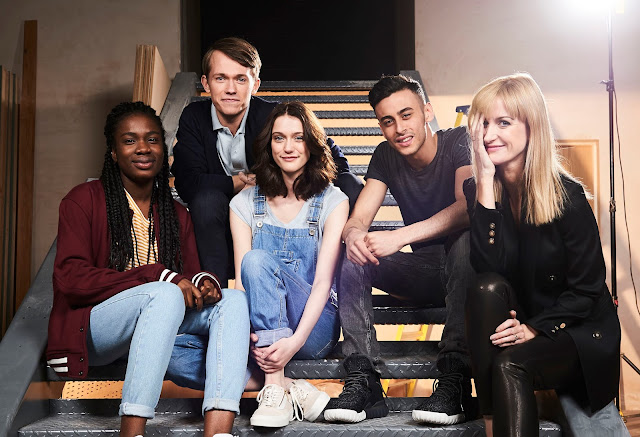 So after the last 2 episodes everyone is really sad and tense with lots of heavily poked sore spots and everyone is kind of angry with each other. It’s poignant and shows all these characters I love interacting and dealing with massive emotional impact

And, I like that we do have a team of teens who did have all of their vulnerabilities exposed and they didn’t run off in a massive epic huff but nor did they just get over it either.

We have a lot of tentative attempts to rebuild bridges (and I say again that the part of this show I love so much is the relationships – definitely over the plot lines) and lots of heavy anger and pain with some beginnings of reconciliations.

Which is when the shadow people show up. Yes these people just aren’t going away. They turn up and start killing people

I know this is to ratchet up the dramatic tension but these characters were essential – parents in a YA series. Involved parents. Caring parents! Don’t remove them like this!

This collapses Ram who is torn apart by this loss which gets wrapped up with him and April rekindling their romance. And it devastates Tanya who is desperate to protect her brothers – and destroy the shadow people. For which he joins Quill

Quill, who has been asleep due to her pregnancy. She’s being looked after by Charlie because he has Complicated Feelings about her: even if she’s not his friend they’re still both the last of their kind which is a powerful bond. And yes she’s pregnant. Also realising that, being a Quill, her kids will probably eat her which isn’t something she’s very happy about but she has other things on her mind – like war, the Shadow Warriors, protecting Tanya and her brothers by being awesome and lethal (pregnant Quill are apparently much more vicious and dangerous) and then training Tanya to fight as well. All while being snarky, awesome and more than a little epic.

She wants her gun back – but she and Tanya also very much want Charlie to use the Cabinet of Souls to wipe out the Shadows: for both vengeance and to keep Tanya’s family safe.

Ram just falls apart because he can’t see any win here. Wiping out the shadows will also kill April just after they’ve both reaffirmed their love. (And removing that shadowiness will also remove April’s mother’s magical cure as well). He also pretty much brings the whole painful impact of the series together – they’ve suffered a lot, dealt with a lot, seen terrible things and there doesn’t seem to be an end to this. He is losing any kind of hope – which is excellent. Because after what they’ve been through in such a short time, what they’ve lost, what they’ve had to adapt to – that’s a lot of trauma and definitely is going to lead to the edge of breakdown.

And Charlie is till torn. Matteus is utterly against Charlie using the Cabinet to unleash genocide against an entire species, no matter how bad they are. Charlie is torn by the horror of this crime. He’s terrified of what he is becoming. He also has to face that this is the end of his hope: he had a hope that the souls of the dead could bring back his people – not be used as a weapon.

Charlie tries to threaten Dorothea and the Governors into helping – showing how far he is becoming that person he doesn’t want to become (what Matteusz fears he’ll become) though Dorothea does claim that as Academics they don’t actually want evil things. Honest. And would help anyway

She doesn’t, all she does is ominously talk about the “Arrival” but she said they would help. Well, they kind of reveal how the shadows are arriving but it’s not exactly helpful beyond acknowledging that they can’t stop them

So that leaves the cast gathered, with Shadows threatening everyone everywhere, invasion looming with the Shadows wanting one thing – April, with their leader’s shared heart – to return with them. The choices are April goes with them and powers up the leader. Charlie unleashes genocide, killing himself and April. Or the Shadows invade and kill everyone.

Until April offers another option and Charlie visibly rips another chunk out of his conscience – and shoots April. Shooting April destroys the shared heart and kills the king of the shadow people: a king that all Shadow people are forced to obey. This comes with lots of nifty speeches about finding the light again and basically having the courage to do evil and find your way back to good because April is good at this

The shadows become inert but there’s a snag… they’re going to invade and kill everyone anyway: Charlie can sense this as the new king (since they’ve got this whole regicide=new king thing going) and realises that the invasion and destruction of Earth is still on the cards and there’s only one other choice

The Cabinet of Souls. He is going to use the weapon to destroy them all

Big, epic, and full of every moment of grief and pain Charlie is feeling: and still being sufficiently up itself that you can almost hear Quill mocking him for it.

Tanya and Quill fight to keep the Shadows away from Charlie, fighting together, saving each other’s lives – while Charlie finishes invoking the mantra that unleashes the souls. They fly from the cabinet and kill all the shadows. All the Shadows on Earth and their home planet – actually destroying the entire planet with the Rhodian souls. I can only assume that the Shadow people are now extinct

And Quill jumps on Charlie, knocking him way from the soul targeting him (and the shadow soul inside him). She saves him, much to his utter horror, demanding he lives with the sacrifice. Charlie is absolutely broken by this – dying with them seems to have been something he was hoping for: this was not just an utter crime of genocide and extinction he unleashed, but also expended the souls of his people, his last chance of bringing them back.

The shard that was aimed at him goes to April – Ram grabs her body and for whatever reason her body is still dead – but the shadow warrior who was holding her at blade edge now speaks with April’s voice. Yup, April has body swapped with a shadowy demon thing.

Between April being a shadow demon, Charlie’s pain (an Matteusz fear/morality), Quill’s pregnancy, Ram’s trauma (and relationship with shadow April), April’s mother being unable to walk again and Tanya’s grief and training with Quill… there’s a lot of hooks here

Now let’s throw in another. Dorothea goes to report to the Governors because she’s made a big mistake in assuming Charlie wouldn’t use the Cabinet because they had plans for that and the Arrival. She is duly executed for this.

How? The Governors turn their back – freeing the Weeping Angel to kill her…

Weeping Angels!!!!! Oh such an awesome classic Who villain who have been ruined in almost every episode since they were introduced. Episodes we will never think of these again.

And, lo, Class has ended its first season. And I love so much about this – especially the characters and their relationships which was so well done. As well s some truly amazing diversity and inclusion which we’ve praised since the first episode because there’s so much here (openly, non-stereotyped Sikh spot sportsman, genius Nigerian-ancestry Black girl, gay couple whose relationship is treated as loving as respectful. Quill who is made of pure awesomeness and snark).

I am frustrated by how short this season was. If Class had a flaw, it would be that its world building and storylines didn’t come close to matching the awesome characters and relationships that were depicted. And even those were SCREAMING for more development or exploration. I think each character pretty much got an episode but they needed more. There was space for so much more. This whole season felt horrendously rushed because there was a ridiculous amount to pack into such a short space. I can see why some people are critical of Class. Beyond the fact they have no souls. Though I still think they have no souls, no appreciation for awesome and are clearly possessed by demonic spirits of sadness and despair.

Also in some ways Class is so good at various forms of inclusion and willingness to not just portray diversity but spend some time actually exploring some elements of that, that I’m even more annoyed when it falls back on poor tropes. I do wonder if maybe I am more annoyed by these tropes in Class because of the high (almost unprecedented because very few of the shows we’ve reviewed come close) bar it sets. I ask myself if I would mention these elements or be as annoyed by them in any other show where my hopes are already suitably crushed? I think I would, but I wonder