Nightfall (Kingdom of Ashes #1) by Elena May 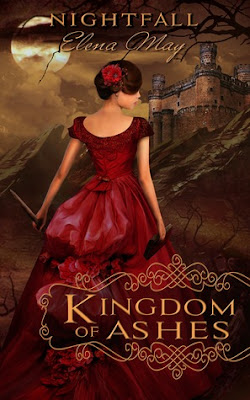 Myra was born after nightfall – after humanity’s Weatherwizard was taken by the vampires, the world was plunged in darkness and the vampires emerged from the shadows, led by their prince

Vampires now rule the world. Humans are a remnant of a remnant, or bred in captivity to feed the vampires. Myra is part of the resistance but with numbers and supplies dwindling all seems lost

They have only one last chance to save themselves – a desperate mission to kill he prince and even that last hope goes terribly wrong when she ends up the prince’s captive and tool in his own driven mission.

I felt a lot that this book has a story/theme it wants to push. So that is what is going to be pushed – we will be going down that path even when it feels forced or awkward.

Part of this is an ongoing theme that art is important, creation is important. And it is an interesting one to develop, especially since we have a whole lot of dystopias where survival is the be all and end all. Often we question, in a dystopian, whether survival really is what we should aim for – especially if we give up things like conscience and law. But it’s rare for dystopians to discuss things like art – one of the big elements of human existence that is lost when we’re reduced to mere survival.

This could be a really interesting conflict to explore. What makes humans humans? What makes our civilisations, our cultures and what is lost when we lose these?

To also have the vampires, glorious overlords of the world they have no conquered, begin to realise this lack as well – to realise the clothes they wear, the books they read, the music they listen to are all created by humans and that, with humanity subjugated, there will never be anything new created again.

But I think this story felt very forced in pushing these themes – it kept them central too often and pushed them in ways that made Myra look rather unsympathetic. She constantly struggles with the conflict over trying to help her people and pursue the war against vampires, or keeping the vampire king’s guidance in making her a better author.

And, really, you need to include a lot of careful development to sell the conflict of “survival of my people” vs “writing tips” and I don’t think it worked. Myra seemed horrendously self absorbed. And yes she agonised over it – but, really – is it something you agonise over? Is your need for a muse really that important that it becomes a difficult choice?

I think if more had been made of the alternative to the King’s rule, that, bad as he was there were alternatives that were far worse – if that had been more emphasised, more prevalent or more powerful then Myra’s conflict may have been more real and understandable.

This is a whole issue with this character that begins from the very opening pages of the book which kind of set the tone. She’s writing in a book and concerned that lack of resources means she only has 6 candles to write by in the cellar. 6 candles? I don’t care how big the cellar is, you don’t need 6 candles to write with – and the fact the opening scene of this book is her disappointment she can’t have yet another candle in her resource poor, desperate survivor group so she can write her stories. That’s the opening scene and it sets Myra up as being really self absorbed.

We follow with a small child, Thea, telling Myra that their leader had asked her come see a captured vampire and within the first 2 pages we have Myra poor scorn on that General – Zach, on their resistance effort, undermining this child doing as she’s told, openly being sarcastic about the resistance and generally being, well, stroppy

This is a first impression and though she doesn’t continue in the same way, the fact she started like this becomes a lens through which I kept reading her. This is why the first pages of your book matter – because after setting her up as this incredibly petty, self-absorbed character it’s hard not to view the entire book through this impression. Especially when she does things like insert herself in a mission to which she’s objectively not qualified – all so she can have “experiences” and improve her writing and then goes on to become almost a collaborator (and no almost about it – actively saving him) with the Prince because – in her own words – he is teaching her to be a better writer. Especially since the author does an excellent job of truly making it clear, no matter how useful the prince is that he is still vicious, a murderer, torturer with no regard for human life. This is absolutely excellently done and would really do well in an agonising story about choosing hat best to do: having to preserve this monster, who is such a complete monster. Except, again, the reason not to murder this monster is “art” which, if anything, means the increasingly portrayed monstrousness of the prince makes Myra seem more awful.

And it’s really hard to get past this. The appreciation of art, the vampires’ attempt to raise nuance over the idea of who is a monster or not (since humans have been hunting them for centuries before the uprising) all kind of feels almost like Myra trying to find a reason to justify her actions. I think more development of these side concepts, more exploration of the vicious forces in vamprekind and vampire history that made the prince a more nuanced figure; then it would have worked better.

I’m also not happy with the depiction of the “farmed” humans – and how the prince discounts them as incapable of producing the art he needs. Humanity has produced incredible art, perhaps its most incredible art – from a position of oppression, suppression, fear and rebellion. Being down trodden, even with an element of complacency from some, would far from subdue humanity’s potential for artistic creation.

There’s also a few side characters who take up a lot of this book and I’m just not sure why: Tristan ad Armida have long detailed histories – but I’m not sure

I liked Franka as a void of reason – but she kind of just emphasised how bad Myra’s decision making was. The flip side of her is we have a belatedly introduced artist who feels clumsy and basically there to validate Myra

There was a decent amount of racial diversity with the resistance – Asian, Black and Latino characters all present: but none of them were especially in a major position. Not because they’re not in a major position in the Resistance, but because we just don’t and then don’t get to see them at their fullest. Similarly with the POC vampires we see.

The literary criticism the book offers is actually excellent – I want the prince to advise so many authors, I really really do

I think this book needed rebalancing. If Myra had had a much better introduction. If her passions for art had been more carefully leavened with other concerns, it would have worked much better. Because her frustration over her art was excellent – how little she was exposed to, how she was trying to write about trees without ever seeing one, how she was trying to capture passionate experiences when she lived in a hole in the ground

Perhaps if this had been longer or split up. Perhaps if we’d seen more of Myra in the resistance, more of her fight to keep art and culture with her people. Perhaps seeing children who were discouraged from playing or reading or even comprehending fiction because they were all trained to fight – perhaps if Myra was less self-indulgent and we had that foundation, perhaps if the vampire society was shown more clearly as complicated and riven with the Prince literally being the lesser or many evils, perhaps if the captive humans had been more than one complacent cow and one person heckling Myra – then I think it could have been a phenomenal book. But it lacks that development, that larger concept, the depth and breadth to stop me yelling “what are you doing?!” at Myra every other chapter.