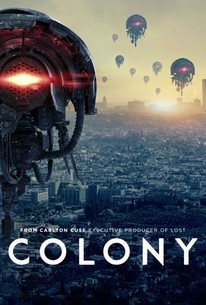 Last week one of the things I thought this episode of Colony might explain further is how exactly it is that Aliens managed to takeover the earth so smoothly.  This week we learned that it didn't simply happen over night and that the Aliens first started to contact humanity in 1969. No wonder the U.S. government had people in place for arrival day. See we all should have been listening to Art Bell when he talked about area 51. What if X Files wasn't fiction but alternative facts?

Back in present day, things for the Bowman family are not looking good.  In the wake of the actions of the Resistance, it seems that food and supplies are in short order. Things are not any better in the Santa Monica block, where Will has turned to Devin for help to find his missing son.

Katie heads to try and see Bram and is forced to bribe a guard for information with a mickey, only to learn that Bram is in transit.  Yes, that means that for daring to go under the wall, Bram is going to be transported to the dreaded factory. From last season, we know that the Factory is on the moon. In fear for her son's safety, Katie heads to see her sister Maddie.  Maddie does her best to calm Katie and promises to have Nolan look into it as soon as possible.

Katie heads back home and in despair cooks up the last of  the rice, completely unaware that she's under surveillance.It seems that Jennifer is keeping her eye on Katie. Will may have trusted Jennifer to keep his secrets but with his absence at Homeland Security, things are getting a bit rough.  Jennifer is told by the new boss that he wants Broussard and makes it clear that he doesn't trust her.  He even orders Jennifer's home be searched.  With her back up against the wall, Jennifer approaches Katie at the bar to try and get information on Broussard, revealing that Will just about admitted what Katie was up to before he crossed the border to find Charlie.  At this point, poor Katie is absolutely exhausted and having not spoken to Broussard in a while begs Jennifer to leave them be.  Katie is certain that if she contacts Broussard now that he will know that she has been compromised.  Jennifer makes it clear that she has more than enough intel to convict Katie and therefore Katie needs to trade herself for Broussard.

At home Katie gets a call informing her that Bram has gone to a work house instead of a factory but what she really wants is to have her son at home. Katie tries to keep things as normal as possible for little Gracie but in all of her worry, she missed the fact that her daughter is being indoctrinated by the step ford nanny.  It's not until Gracie worries that her father and Bram aren't coming home because she isn't working hard enough towards the Greatest Day.  Katie assures her daughter that this isn't the case.  What the hell is the Greatest Day?

Maddie tries to press Nolan to do for more for Bram, pointing out that he's just a kid who got into a little bit of trouble but it's clear that Nolan has no plans to stick his neck out for anyone but himself. Dude would sell his own mother to live in comfort.  Nolan says that Maddie is just about to be inducted into their super secret special club and that this has to be a priority.  Nolan also warns that if they cash in all of their I.O.U's now, they won't have them to use the next time that the Bowmans need help. He's more than happy to take credit for Bram being sent to a workhouse though.

In reality, the reason Bram is in a workhouse rather than the factory, is that he figured out while in line with the rest of the prisoners that if he didn't claim to have a skill they could use that he would be sent away.  Bram lied and claimed that he's 20 years old and that he worked in construction. Bram is warned that if steps out of line that he'll catch a beating the first time and be sent to the factory the second time.  He's also warned that stealing will lead to being sent to the factory. Bram ends up losing his mentor who's sent to the factory but he does manage to meet a girl in line.  Yep, I think Colony is about to get a taste of teenage romance.

Rightfully worried that Nolan isn't doing everything that he can for Bram, Katie decides to wait for him outside of his place of work.  Nolan starts off oozing charm like a used vacuum cleaner salesman and he assures Katie that Bram could be home after a few years of good behaviour. Katie continues to push but Nolan is not about to lift a finger for Bram and is quick to put Katie in her place.  Later, at home, Katie gets a visit from Maddie, who's absolutely pissed that her sister went behind her back. Maddie wonders if Katie simply doesn't trust her, or believes that she's to incompetent to help. Katie explains her desperation which would make sense to someone who isn't about to drink a big vat of kool aid but Maddie is not moved.

Maddie instructs Katie to think about her empty house and promises to have Gracie brought home to her.

Now that he's had some time under alien rule, Will is far more willing to work with Devin, who has been working as a bounty hunter since the Aliens arrives.  Together, Will and Devin round up a teacher who is on a list, in order to trade with Solomon for access to Charlie.  When Will finally gets his face to face with Solomon, he suggests trading his pass to get Charlie back.  This prompts Solomon to ask what's to stop him from keeping the pass and not handing over Charlie. Will is seething and so it's up to Devin to point out that doing so would be bad for Solomon's reputation. Solomon simply cannot take a hint and suggests that Will should thank him for taking care of Charlie because things are rough in the Santa Monica block. Will swallows his pride and answers that he will be grateful for the rest of his life if Solomon leads him to Charlie. Done playing games for now, Solomon gives Will Charlie's location but warns that Charlie may not want to stay with him because living rough changes a kid.

Devin and Will scoop Charlie up and it's clear that Solomon is right and that Charlie is not the bright little boy we were introduced to.  Charlie is quiet and resistant to answering any questions that Will has about how he's doing.  Charlie doesn't even show excitement when Wills starts talking about the rest of his family. Devin encourages Will to give it time. Will and Devin then discuss the woman they handed over and Will learns that the Aliens leave the block alone, if the warlords hand over a certain amount of people each month.  Will is stunned by this coming from a place where people quietly resist the Aliens the best that they can and sees this as collusion.  Will sure as hell doesn't believe in seeing grey in anything, even after all that he's been through, unless it applies to him. Will has regrets about handing over to the teacher to get his son back.

The next morning, Will wakes to a clanging noise and Charlie missing from the couch.  Outside, Devin caught Charlie trying to slip away, taking some of her possessions with him.  Back inside the house, Charlie explains to Will that Solomon punished them for not doing what he said and reveals that he learned to obey.  Will is enraged to learn that his son has been tortured and decides to pay Solomon another visit. Will grabs his gun and Devin tries to talk him down but he is having none of her advice about calming down.

When Will arrives at Solomon's compound, the first thing he does is shoot the guy who stabbed him last week.  Will then systematically goes through Solomon's compound and kills every adult he sees. When Will finally gets to Solomon, Solomon manages to put up a little bit of a fight before being beaten to death with his own tire iron.  Will then searches through Solomon's pockets and takes his pass back and what appears to be some money out of his pockets.  When Will turns around, he sees a group of kids. Will explains that he is Charlie's father and tries to convince to the kids to come with him but after seeing him beat a man to death, those kids aren't about to follow the pied piper anywhere.

Back at the work factory, it's chow time. Bram is sitting by himself when a scary looking dude begins to approach his table. Before things can get bad, Bram's new friend intercedes and invites him to come and sit with her and her friends.  Bram takes a seat, still a little unnerved from having avoided a problem, when the guards march in and grab a man a few seats down. It seems that the man stole a screwdriver and we were told at the beginning what the sentence for theft is.  On the heels of the guards, is none other than Snyder, who questions if it's worth going to the factory for the sake of a screwdriver.  Snyder than makes eye contact with Bram, making it clear that he knows who Bram is.

Having cussed out her sister for daring to speak to Nolan, it's time for Maddie's initiation ceremony. Jennifer makes a promise never to reveal what she learns and is told that if she breaks her vow everyone she loves will be killed. That's one way to buy silence.  Maddie is left alone in a room with a glowing cube which when she picks up, seems to shift her someplace different.  When a disoriented Jennifer puts the cube down, Nolan is there to embrace her proudly.

I actually feel really sorry for Katie right now. She's all alone, hungry and with no power to help her family.  Katie should have been able to turn to Maddie but it's clear Maddie is more concerned about getting hers than helping her sister.  Maddie willingly drinks the kool aid. It feels as though Maddie's allowed herself to be inducted into some weird Alien led religion, thus giving her even less reason to be helpful to Katie.  I just know that when things go south for Nolan, he's going to have no problem throwing Maddie under the bus.  Nolan actually makes Snyder seem like a caring person.

Speaking of Snyder, the fact that he knows who Bram is doesn't necessarily bode well for Bram.  Snyder has to be feeling the loss of the power that he once had and given that he's a man who doesn't like to play second fiddle to anyone, I suspect he is going to use Bram in some way.

Having killed Solomon, Will is now in charge of a territory. The only question is what is he going to do with it.  Yes, he has his pass back but will it even be recognized with Snyder out of power for weeks now?  I have a feeling he will be in Santa Monica for some time to come with Devin by his side. The one thing that is certain is that Will really doesn't know how to relate to his son. Yes, Will killed Solomon but after everything that Charlie has been through, he's going to need real help to recover. I hope that Colony doesn't rush through this.