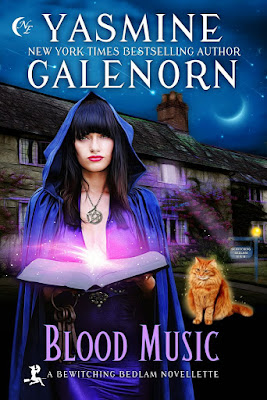 I’ve followed Yasmine Galenorn’s Sister of the Moon/Otherworld series (the name seems to change depending on who you ask) for a long time and I’ve always enjoyed her world setting, her characters and her stories. I haven’t enjoyed the massive massive bloat that besieges the series because there are so many ideas that it’s heard to fit them all in

So a new series entirely? That is promising.

And it is – promising pretty much sums up this book because it is an excellent introduction book. There isn’t so much a plot to this book as there is a general laying out the land. We meet Maudlin (Maddy) and learn a bit about who she is, what she does,

One thing I really like from the offset here I that we’re introduced to Maddy, he recent past and experiences, the fact she’s a witch, her friends and some nice world building around her but there’s no sense of specialness. That doesn’t mean she’s not an interesting character – far from it – she’s intriguing and strong and determined and has a really good relationship with her friends. And she can definitely become special and awesome – but because of what she does in the books, not because she’s come in to this book with the special heritage/magic/woo-woo of specialness. Neither tragic nor ordained for greatness.

She does have a past- but it’s a very mundane bad past. The simple but powerful story of a woman leaving an abusive and soul destroying relationship and beginning to find herself again. And that’s an excellent story – because having someone with a compelling history that doesn’t have to be epic, soul-shattering or so extreme is a wonderful thing to see. I want to see Maddy leave her ex in her dust and build herself an awesome future

Along with the cat, Maddy has some great friends and an obvious community that had her back. We don’t know much about them yet because it is an excellently brief introduction to the world, not overwhelming us with extraneous facts before we’ve had time to digest this.

Now the bit I don’t like so much – Aegis. Because all those wonderful things I said about Maddy? Don’t apply to Aegis. He’s super ancient and super special and super powerful and super cursed and super tropey. And he sees Maddy and he finds her super duper compelling and super duper attractive after 2 seconds of seeing her and now he wants to cohabit with her and *siiiiiiigh*

I could have done without Aegis. I want to see Maddy continue to get over her bad break up, find her new home, create her new life, connect with her friends and establish herself and grow. I would have loved to have seen that, especially in an introduction novel all about showing us Maddy and her world without introducing a love interest.

Especially if witch blood is going to be an aphrodisiac and we’re going to spend so much time on how hawwwwt each one finds the other.