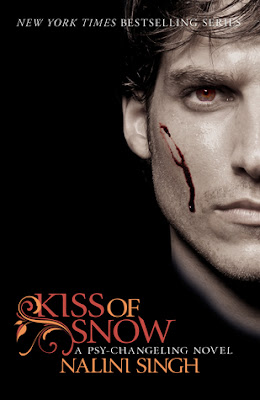 Sienna, powerful Psy defector and Hawke, SnowDancer Changeling Alpha have struck sparks since she first arrived in their land. Rebellion, anger, defiance – but under it all attraction which Hawke is desperate to avoid. His mate died when he was a child – he knows he will always be alone and he cannot offer Sienna the life she deserves

While Sienna has her own fear – she’s an X Psy, incredibly rare and even more dangerous. She’s already lived longer than any other of her designation. She knows her days are numbered – but who will she take down in the inevitable end.

There is an issue sometimes, especially with long series, where you have a long running complaint and then a book kind of deals with the issue and you celebrate but part of your brain realises that you’re not so much celebrating a good thing so much as the reduction of a bad thing. So we have with this book:

Squee!Brain: a relationship with a female Psy who has an actual active, destructive power!

Cynical!Brain: And they have to pair her with literally the most ALPHA DOMINANT changeling ever so she would still be the submissive one in the relationship

Squee!Brain: But she challenges him!

Cynical!Brain: They ALWAYS do. But they’re always the underling fighting to be treated as an equal from the man who still largely gets his own was. Also we have a creepy age-gap “let’s wait until she’s juuuuuust of age” issues along with virginal heroin + no man may touch her issues.

Squee!Brain: But she isn’t a delicate Silenced Psy who has collywobbles if someone so much as touches her

Cynical!Brain: But she is facing super death because of her powers and being saved by his looooove (no this doesn’t count as a spoiler. If you’ve reached this book in the series you know exactly how this relationship is going to end and don’t pretend you don’t).

So, I’m conflicted. This relationship does address some of the main issues I’ve had about the previous books in this series. Sienna makes it clear that she is the one who knows her own powers and she will make her decisions about them. I like that she establishes her own authority when it comes to her powers, limits et al which is so vital when we’ve had so many Changelings decide they know their Psy lovers better than those Psy do. Equally, unlike the previous books I like that Hawke is somewhat respectful of Sienna’s boundaries – at least in terms of her bodily integrity. He doesn’t touch her or pursue her – the opposite in fact

Of course this is a little toxic when we consider his possessiveness. Hawke both runs from a relationship with Sienna but also lays his claim and violently threaten men who may enter a relationship with her. Yes he’s not pushing her into a relationship, but he is pushing her to be his pedestalled virgin. But, again, to be fair she does challenge this vehemently. Equally while she’s saved by his love, she’s just as much saved by her fellow Psy relatives. I would also quite like her to be able to actually use her Psy powers more but it is nice to see a woman who is this must dangerous and who does show the other side of Silence so well.

Really, it is a vast improvement on the previous relationships which have annoyed me so much in this series. There’s still some tropes that are a problem but it’s nothing like the ones before

Excellently Sienna also have female friends who support her, work with her and recognise the gaps Sienna has in her emotional development due to the years she spent in Silence. I like that a lot, that Sienna has women in her life, women backing her up, women valuing her; even if they don’t play a huge role it’s still an important part of Sienna’s life.

I’m also more intrigued by the relationship between Walker and Lara. This is a relationship where no-one is willing aggressively pressing the other, no-one is emotionally fragile and falling apart, no-one freaks out if someone touches them, no-one has to epicly change their entire life to suit the other. It’s nice for it to be more low key relationship and not rely on so much emotional damage and fragility and broken boundaries. It’s built on respect and kindness and love and caring and people literally not having to choose between tying themselves mystically together FOREVER or DYING (hate hate hate that trope). Which is wonderful – and all the more annoying when Walker decides to play “ugh, man in same place of my woman! Ugh. Bad man! Ugh. I crush your flowers, MY WO-MAN”.

Dear far too damn many romance sub-plots, main plots et al. You. Can. Portray. True. Love. Without. Raging. Jealousy. No, really. The ultimate sign of true love is NOT “he wants to lock you in a basement where you’ll be mine, and only MINE! MUAHAHAH!” STAHP

Still, I say again, the relationships depicted here are a lot better than previous ones in this series

I also like the ongoing world building – but does that go without saying at this point? In every book in this series I’ve said how much I love the meta plot. I love the Psy’s growing civil war. I love the depiction of the fall of Silence. I love the sides being picked, the manoeuvring, the plotting. I love the displays of power by the high level Psy just reminding us what an all out war could actually look like. I love the growing sense of ominous tension that is growing more and more throughout this book as we wait for the next move.

I even like the smaller developments – as we see more complexity from Nikita’s character even as we’re reminded how utterly lethal she is (the Snowdancers have an army – several squads make a play for Nikita’s tower and their brains just melt. Don’t try her). And seeing the emergence of how destructive the Psy and Changelings can be when working together is promising for the future

I feel wrong for saying so little about the world building and metaplot next to my long debate about the romance. But I’ve already said so much about how awesome this world is- and really it’s hard to say something other than how good it is. It’s imaginative, creative, well paced, excellently written with some really compelling characters. I love it, I love it so much

There continues to be excellent racial inclusion as well – not the protagonists but a lot of the characters around them – from major characters in past series like Nikita and Sasha and Lucas and so many others as well – side characters like Kieron a love interest for Lara, Lara herself. There’s a lot of diversity in the pack, among the Psy and because there have been POC protagonists in previous books

There continue to be no LGBTQ characters – and this series has been going a very long time now.

With the relationship issues at least somewhat addressed this book I was able to appreciate the world and story that I love so much. This was a breath of fresh air in this series, removing a lot of what I didn’t like and allowing what I loved to stand out