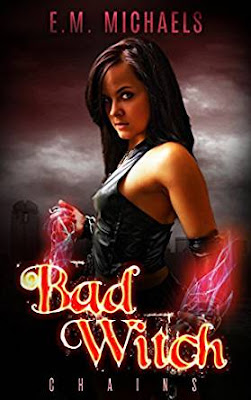 And then she starts having images of the past, running into ghosts and shapeshifters – and sprouting magical chains.

Using a novella to introduce a series can work… It can. In some ways it’s preferable – it allows you to focus on the world and the characters without having to be concerned with a long running storyline to introduce, develop and then finish properly. That can be a big ask. Usually the world building is lost as we’re dropped heavily into a big plot line that tries to take over the book without having the proper foundation

It’s hard to introduce a character when she’s neck deep in world saving. And if you’re then going to try and introduce metaplot as well? It’s a lot

So a novella without the need to introduce more than a minor plot line? That works. That lets us see the world without having to do anything too epic – which is what I mentioned favourably recently.

And I hate to play one book against the other but if that is how you use a novella to introduce a series, then this is the very opposite.

Quite literally – we had the world setting take a hefty back seat, character development given an attempt with very little development to make her appealing and topped off with what I guess was supposed to be an epic storyline but was so rushed, undeveloped and confused that it was almost jarring. We were setting up a big dark menace, one apparently as old as witch burning that is fixated on the main character and I thought we were going to see the beginning of several books of conflict instead of it just… ending. Why set up such a vague epic threat and deal with it so casually?

The story itself feel like a stream of consciousness exercise. The protagionist neither drives anything nor explores anything. She wanders around, has a weird experience in a club, wanders some more, randomly decides to go running because woo-woo then we have info-dumpy ghosts (ghosts? In another realm? Yes? No? Maybe? Relevance? Because she could have found a book, a recording, a passing Cheshire Cat – all would have made exactly the same impact on the book). She runs around with a werefox who, again, could be any supernatural creature who is fairly hot. I would say he’s a generic guide but that would require him to actually guide her instead of just wandering around with her following. The go to a spooky shop. It’s spooky. The shop keeper gives her grief about being all sexual so she can flare up but she doesn’t actually buy anything so… why is she here? Why is this scene here?

Oh and on that? I’m all for a woman owning her sexuality and resisting slut shaming – but why is she running around in leather hot pants and a midrith boob tube when going to see a guidance counsellor? That reads less like “sexual woman who resists shame” and more “teenaged cry for help.” There’s “people are slut shaming me” and “people are wondering why the hell I’m dressed like this at this time and in this place?” “Aha old woman judging me for my sexiness, I will pose until she looks away embarrassed” would be a great rejection of judging on appearance and dress if that woman’s disapproval could have just as easily as been “my gods woman do you not understand the concept of business casual?” as much as “you whoreslutjezebel.” What happens in book 2? Does she challenge misogynist standards of dress by going to a board meeting in thing and pasties? (I was going to use “meet her president” but…. Yeah, I don’t even have to finish that sentence).

We learn nothing about the world – we don’t know why she’s having flashbacks, why her magic manifests as chains in her arms, what that means, why she could so easily defeat a centuries old threat, why she’s having lots of flashbacks to times gone bye. What are these supernatural creatures? Why do they care about her? What does any of this means?

We learn little about her. She briefly mentions her mother but that’s about it. She’s struggling in school but we don’t really examine that or why she’s changing her major every 5 minutes. She has a friend but no real look at their relationship. Hints of bisexuality but everything’s just in such a rush and blink that it’s hard to say anything definitive beyond throwaway lines or jokes between her and her roommate and a cringworthy “everyone is bi” line.

A lot of questions aren’t answered in this book – but above all is the question “why do I care”? Why should I return to this series? There’s not enough about Cassandra to invest me. There’s not enough about the world to give it any real character to encourage me to explore. There’s no relationship that intrigues me. There’s no plot hook, no meta and really nothing which makes me want to pick this book up again. I actually looked at the blurb for this book to figure out what to write on my top summary and then closed it down again because the blurb only slightly resembles what actually happens in this book.