Fire in Her Blood (Death Witch # 2) by Rachel Graves 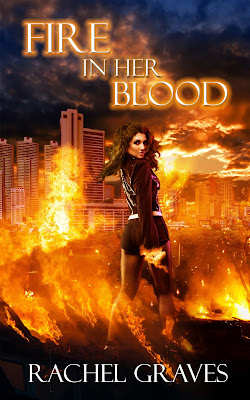 But the fire witches in the city seem to be losing their power – except for the Fire Mage she has to work with who seems connected to her boyfriend Jakob – who Mallory has to work with despite the awkwardness.

Throw in some lethal vampire politics, friend issues and Jakob being determined to buy Mallory a car and she’s got a lot on her plate.

This book had many of the elements of the last book Iloved – especially the detective work. We have the twist, we have the distraction, we have the chasing down of various leads, coming up with theories, discounting them, coming back to them, then not finding evidence and having to go back to the drawing board.

And having more than one case! Even if they are related. How many police shows/books/etc have the character get to focus all of their attention on one case like there’s absolutely nothing else on their case load?

I really do like the police work and investigation in this series so far. I don’t think I was quite as much a fan of the police work in this book because I guessed what had happened rather a lot before I was supposed to which meant a lot of the red herrings felt more like distractions. I was almost frustrated with Mallory for not seeing what seemed to be pretty obvious

I do really love the idea that you can build all of these super elaborate theories about a criminal’s motives but how often do people do things for such petty, minor reasons? I like that a lot –I like the humanness of it, even when it’s so banal. I think this works so well because it both makes it very real but it also is a nice contrast from so many other books where the scale and stakes are always so high. Seriously you can have an interesting story without the entire world being in balance, or the city about to be eaten by sea serpents or something. I really like that, the closeness of it –but it still mattering because people were dying, people were hurting. It still matted without the spectre of apocalypse.

This should not be a rare thing. Really, it shouldn’t be a rare thing, Really. But sadly it is – and her having a circle of so many female friends who are all awesome in their own way is really rare. A woman who doesn’t live for her work and who even has friends who *gasp* care about silly female things and fripperies? Yes we have it here

I also like the explorations of the different gods and the witches as well as how this bleeds over into social issues and society (like he Fire witches, their insular nature, wealth and class biases as well as how they regard family members without magic). Or spirit witches and how their senses change how they react to different things is also really excellently done

I also admire how the author restrains themselves from using ALL THE THINGS. We’ve already established that there are many many shiny magical creatures in this world. And though we see a lot of them we see them briefly and the whole book isn’t swamped by a gazillion creatures and details. Instead we have a nice, slow, build as more and more of this world is introduced as and when it becomes relevant. And, just like not needing to use epic events to keep the story interesting, it equally doesn’t need to use every creature and power to make the world interesting.

I still don’t like Jakob or Mallory’s relationship with him. I like his cooking – but I don’t like that nearly every interaction between them is basically sex. They’re together? Sex tends to happen

Here we do have the introduction of E, an old friend/family member of Jakob’s which makes things even worse. Because now we have this shallow relationship with extra jealousy – which keeps happening over and over again even when it’s long since clear that there’s no reason to feel that way. I also wish we’d explore more of brutal vampire society and how Mallory feels about that. Instead we have a kind of studied denial – she’s not going to look too hard at the bad stuff in case, well, she seems to deliberately avoid the whole thing.

This book has a mix of approaching diversity and prejudice. Witches are shown to be facing prejudiced which has issues with the supernatural being conflated with real world prejudice (remember, actual real world prejudice would be vastly different if marginalised people could throw fire around) but at the same time addressing real world prejudice, not just the overt and the vicious but also the banal and daily macroaggression POC often face to conflating of different ethnicities.

I also have to say while it is not an ideal to compare magical prejudices to real life ones, the way they deal with Mallory and her PTSD over werewolves is interesting: because she knows she has to deal with werewolves despite the trauma she’s suffered. She recognises that judging all wolves because of these experiences she had is wrong. She has issues with them, she needs help – and equally recognises this is something she has to deal with and fix within herself: not that all werewolves need to stay away from her or how it’s totally ok for her to hate them

We have decent racial diversity among the side characters: Ben is a native Hawaiian and taking more of an involved role in the book and being closer to Mallory’s friends. Her friends are different figures, but all considered attractive at their different weights, one is Jewish, one is Latina. We also have Mallory’s boss who is a Black man and Indigo who is a Latino man. Along with this we have bit characters like Djinn and Yuki-Onnna. This is one of the books where we do have several POC but when you look at the focus – Mallory, Jakob, Danny, Mark – are White

Now, Anna, she plays a much more involved character. She’s a Lesbian character and is dealing with the fact she is in the closet, a model (so faces career issues about coming out) and has a homophobic family to deal with. This could be developed, it could be developed a lot, especially since we have a bisexual woman introduced who could add more facets as she is out – but is also a daughter figure to Jakob who we’ve already established is a pretty vicious homophobe (which is trotted out again this book as something to be tip-toed around, not challenged)

But the way it’s handled? Ugh. Like we cover professional prejudice and how lesbians are regarded in that her manager said she can be a “trendy lesbian” not an “activist lesbian” and there’s so much meat there in how LGBT people in general and lesbians specifically have to follow special rules to be considered even a little acceptable. But it’s just brushed over quickly – and maybe the book doesn’t want to dwell too much on the side character but given the homophobia in the last book, a counter is needed

Especially since Anna loses her fire magic. Granted by the goddess Raya, who has turned against her and her family and this is so devastating to them since being the most uber fire witches ever is so integral to them. Why has Raya withdrawn her hand? Because Anna is weak. Weak - because she’s in the closet. Yep, a lesbian in the closet because her family is clearly homophobic is WEAK

Also I have to have a moment over Mallory protesting that she totally doesn’t understand prejudice – when she spent last book heavily justifying Jakob’s violent homophobia and is quite happy with being with Jakob and deciding to just not mention lesbians around him since he has those pesky issues. “I don’t understand prejudice and it’s just so wrong… except when it’s homophobia and from the man I love. Then, meh.”

It’s always sadder when you have a series that could be awesome with a major, glaring hole in the middle that makes it hard to read without cringing.