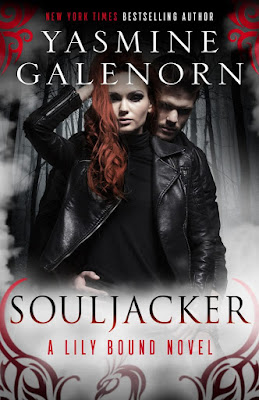 Lily is a succubus, after centuries of dangerous wandering she has finally managed to settle down and set up business in her salon

But when a client is killed by a vampire in her place of business, the life she’s sought to preserve start falling apart. The vengeance driven widow determined to drive her out of business would be bad enough- but the murdering vampire wasn’t just a random act.

The vampire is a serial killer – and he’s targeting customers from his mortal life. Including Lily and her frinds.

And everyone knows the police don’t investigate vampire kills

We have a common Urban Fantasy everything-there world here which Yasmine Galenorn does so long. Honestly these are always my favourite kinds of worlds so long as the author has sufficient restraint not to throw all of it at us all the time, swamping us

I think this book treads a narrow line. Lily is a succubus, we have the fae courts which she’s also related to. We have a magic cat, a witch best friend, a human friend, a chaos demon, several wereanimals and some vampires. It’s a lot

But it works because they’re all tied into the plot in a relevant fashion. We have elements of world building like the politics, opinions and culture of the wereanimals, the vampires and their ongoing plot to gain more power and how different they are from the people they were before. The world building is huge but the focus manages not to get too distracted.

The plot itself has a lot of action, tension and many many dramatic scenes pulling in many characters as the seral killer is made very very personal. A lot of the time it’s very hard to justify why none police characters are actually going to chase a serial killer around – but here the combination of politics tying their hands and the personal nature of the attacks really bring the story home to the characters rather than having random amateur hour.

Lily is a succubus and, I admit, when I first read this I kind of cringed. There are some excellent succubus protagonists out there. And also a substantial amount of books where I have to skim past endless pages of humping to get near the actual plot. Thankfully, this book fell in the former category – Lily being a succubus – and a sex worker is not used as a gratuitous way to have lots of sex scenes. In fact her hunger is used both to create a burden she has to deal with and work around (especially in a society where wandering around in an evening is difficult and dangerous) as well as a tragic and difficult path. Being a succubus is no just about being super hot – far from it.

Her portrayal as a sex worker is also interesting – she adamantly rejects any kind of shaming, embraces and even celebrates her profession even as she is judged on several different angels and even persecuted by people judging her at least in part because of her profession both showing how sex workers are shamed without accepting that shaming as legitimate even as she is forced to change professions

Lily and Archer‘s relationship. I’m sort of torn on this. On the one hand I think they lept in a bit quickly and it was all kind of used as a way to push things forward, set the hooks for the next book, justify keeping Archer around

I could get him liking her, because why wouldn’t he? I could get him being sexually attracted to her certainly. But he seems to be lurching into full blown relationship mode extremely quickly that just felt a little off – more plot-convenient than actually character driven

Lily is bisexual – which, yes, is a trope for succubus but in this case wasn’t linked to the idea of her being a super predatory sexual monster who is happy to eat everyone. While the relationships we see are all with men and the defining relationships of her life we’ve heard of are with men and her clients mentioned are all male, she does reference a past female relationship and she is willing to feed on Dani (but not have sex with her). Men are definitely prioritised in display, depth, prevalence and explicitness of her romantic and sexual encounters and history.

I do not remember a single POC or character described as a POC – certainly not any I recall as described sufficiently prominently or unambiguously enough for me to remember.

But I also have the feeling that the author felt the same as me – really really wanted to move on as well. This book feels like the introduction to an awesome world and story the author really wants to tell – and so this introduction book is just a littttttle hurried. Lily and Archer‘s relationship (both romantic and professional). Nate being set up to join them. Marsh appearing. Lily suddenly being recruited by Wynter. Lily’s family revelations. The relative ease of resolving the big bad. None of these are bad but I do get a collective sense of wanting this done so we can move on to the good stuff.