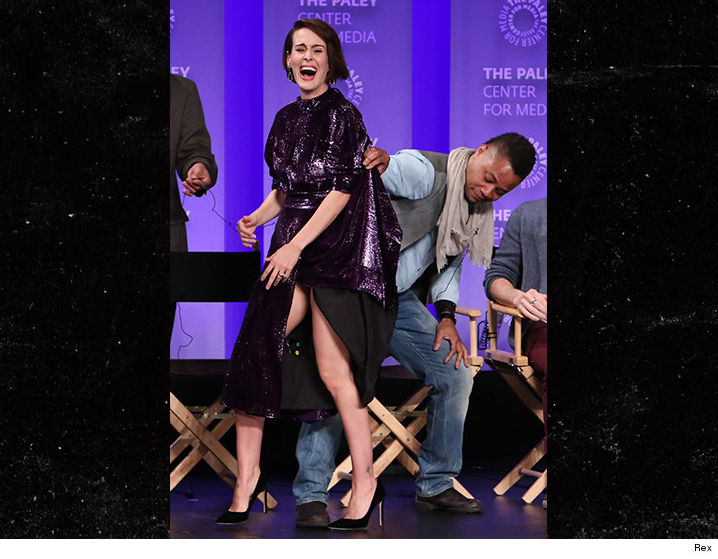 It’s been reported that Cuba Gooding Jr and Sarah Paulson were at the American Horror Story: Roanoke panel for the Paleyfest in Los Angeles, to discuss American Horror Story: Roanoke. This would have been an unremarkable event had it not been for Cuba deciding to slip behind Paulson and lift her dress, exposing her legs and buttocks when Paulson turned to introduce Kathy Bates. Paulson responded with a shriek as she tried to cover her exposed body.  Since news has spread of Cuba’s actions, twitter responded with rage questioning how he would feel if this happened to his daughters.

American Horror Story: Roanoke is not the first time these two have worked together and they have reportedly established a friendship. It’s in the guise of joking around that Cuba felt he had the right to expose Paulson as a joke to the audience.  That his actions were a form of assault most certainly didn’t occur to him.  It’s because of rape culture that violent actions (and make no mistake about it, forcibly exposing someone’s body is violent) are laughed off as unimportant. That Twitter felt the need to reference Cuba’s own daughters as a way to attack his actions evidences that even when we can recognise an assault for what it is, we reify the idea that woman as a category are not due bodily respect.  Women are only free from assault when they can be framed as mothers, daughters, sisters and wives.  What Cuba did to Paulson isn’t wrong because he doesn’t want his daughters to be similarly assaulted but because he violated Paulson’s right to privacy and her right to choose when her body is displayed.

I know a lot of people have defended this action with the argument that Sarah Paulson laughed it off. She didn’t react with outrage and anger - so it must be okay then?


But, realistically, was she even able to respond any other way? On stage in front of everyone in the middle of a convention and an expectation to show a united front, she could hardly turn round and give him a slap upside the head or a swift kick to the yin-yangs.
And if she had, do we think people would have rallied behind her? Or would we now be seeing storms of tweets, posts and stomping tantrums on people about how she “can’t take a joke” or similar dismissive language? Even among the people now outraged by Cuba’s actions, how many of them would be less sympathetic if Sarah Paulson had committed the cardinal female crime of reacting in anger?

Because this is another side to the pervasive toxicity of Rape Culture: that not only do men like Cuba Gooding Junior feel that it is acceptable and/or “no big deal” to expose a woman like this but women are taught and/or pressured to accept it, to tolerate it, to not make a big deal of it.

This is the poison of rape culture - that it empowers, enables and encourages men to perpetrate these acts while simultaneously demanding women accept, tolerate or be held responsible for them. I’m actually quite surprised that no one questioned why Paulson was wearing a skirt in the first place, given that it’s a standard response to blame the victims appareil or how much she had to drink or even why she was a certain location.

This is certainly reinforced by our media - both in front of and behind the camera (or society in general - after all, openly bragging about sexually assaulting women is not considered an issue for a presidential candidate). How many men who are guilty of sexual assault - and outright rape - or have been accused of the same, either enjoyed long careers with no consequences (like Bill Cosby) or continue to be honoured and feted with not a consequence in sight (Casey Affleck, Woody Allen, Roman Polanski).

How many times have their victims been dismissed at best and outright pilloried at worst?

And how many times do we see these same messages repeated in the media we consume?

How many people remember that Damon raped Caroline on The Vampire Diaries? But they’re all friends by the end. Grimm has played with rape more than once - and both have been utterly terrible either by failing to acknowledge the rape or by outright blaming the victim. Game of Thrones has used rape, sexual violation and sexual humiliation so many times I can’t even begin to count them all; half the time it was little more than background wallpaper or clumsy attempts to make a character look bad; but were any of us expected to be sympathetic of the forced marriages or a naked, paraded Cersei?. Westworld turned rape into a ride at a theme park (but at least tried to depict it as abuse being inflicted). Magicians also depicted rape as traumatic - but also thoroughly punished and demonised the victims - and forced marriage is casually brushed off. From Dusk Till Dawn has the sexual exploitation and slavery of Santanico be the defining element of her backstory - but her motives, and her revenge, are repeatedly dismissed. Poor, sympathetic, tortured Roman rapes a woman on Hemlock Grove and he’s still our poor sad protagonist. Lucifer’s inability to respect boundaries is supposed to be seen as sexy and titillating,
Books continue the same theme: nearly every straight male character in the House of Night Series is a rapist - and none of this stands as condemning them. Though we do have some demonisation of their victims. The Psy/Changeling series pushes an extremely common romantic trope that men must continually push and pressure women into a relationship. Equally common is possession and control of women by dominant alpha men, epitomised in the Mercy Thompson Series. Most of our romance storylines include women coerced into sex one way or the other, aggressive alpha males who don’t know the meaning of the word “no” and no small number of vulnerable, exploited women.

It’s not an accident that much of the media we consume uses rape as a form of storytelling or promotes rape in the most gratuitous ways. It’s because rape and/or sexual assault are so ubiquitous that the media has no problem portraying it in the most problematic ways. We consume these scenes without much thought or consequence about how it mirrors our real world ideas and in fact actions. When a judge can ask why a rape victim didn’t simply keep her knees together and Brock Turner can be released after three months for sexually assaulting a young woman because his swimming career would be impacted, how can we say that rape is taken seriously as a violation?  Rape is an act which a community will come together to deny and or avoid it it means protecting their football team after all. Rape is an act which the perpetrators can disseminate on social media because they are sure that they will remain consequence free. The media simply reflects our real world attitude toward rape and sexual assault back at us as entertainment.  Is it any wonder that Cuba Gooding Jr would think it unproblematic to expose Paulson for all the world to see when the world itself long ago decided that women don’t have a right to be free from violations and assault?