The Librarians and the Mother Goose Chase by Greg Cox 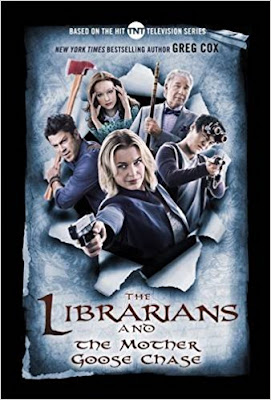 But now, someone claiming the legacy of that ancient sorceress is back and determined to reunite this tome

I’m always a little wary of TV series to book conversions because they very rarely work. The problem is that so much of a TV series is left to interpretation: we’re not in the character’s heads, we don’t know how they think and seeing someone else’s take on these characters can be really jarring (just look at the Grimm book adaptations).

Even without that, just the tone set by books can be very different from TV – like the very act of describing characters: this book opened with Eve and Jake. Eve was described as a “statuesque blonde” and Jake “ruggedly handsome”. Don’t get me wrong, no-one looking at Eve on the show can argue that she is, indeed, a statuesque blonde and no-one will disagree that Jake is ruggedly handsome. But to open with these descriptions ironically makes the appearance of these characters more important than it would be on television

I think this happens a lot with tv-to-book adaptations. Because TV is such a visual medium, descriptions and appearance are automatic but, conversely, are not always relevant (beyond the constant drive to use pretty actors). Eve’s statuesque blondeness is rarely relevant in the TV series, it just is. But book adaptations feel the need to include the same level of description as they have in television – but Chekhov’s’ gun applies. If you mention appearance in a book we assume this is somewhat relevant: by trying to imitate the visual aspect of television, this book managed to create the impression in the first few chapters we were looking at an Eve/Jake romance: because when your book opens with two characters fighting for their lives against a mystical boar, the only reason “statuesque blonde” and “ruggedly handsome” would appear in the text is to establish a romance subplot

(Ironically the one place where I think it described a character too little is Ezekiel – it stands out that while we need to comment on Jake Stone’s rugged handsomeness, there’s no mention that Ezekiel is Asian. It has a vague feel of “colour blind” description, like mentioning his race would be racist)

I mention this, though, because it’s the only element of the TV-to-book adaptation that it got wrong. Oh there were a few slides that I didn’t quite follow happily – like Jake’s romance subplot (though, to be fair, a romance based as much on academic achievement, curiosity and interest as much as physical appearance does work) and I think both Jenkins and Eve were a little more Mother-Henish than I’d pictured them. All were within the realm of what I pictures though – except Ezekiel. The show depicts an Ezekiel who is pretty flippant and light but that’s his face he shows to the world and we’ve repeatedly been shown he goes much deeper

And I’m nitpicking. I’m nitpicking because this is one of the very few tv-to-book adaptations where I’ve generally really liked how every character has been depicted. I’ve generally agreed with their thought processes and haven’t been jarred at all from my experience of the TV show. This feels like a continuation of the show, not some weird unrelated offshoot of it.

I also really like how it handles the sow’s backstory and world building. A lot of these books tend to recap the shows HEAVILY. And I get that you want to be stand alone, but let’s be realistic – only a tiny percentage of the people picking up this book won’t have seen the show. Instead we have this book nicely explain the world by drawing on other events, other artefacts, other creatures. It gives us lots of snippets into the world of the Librarians, their daily adventures to explain what they do, each characters personalities and abilities without writing out previous episodes and without it being a drag to people who have watched the show; while still giving enough information for anyone who is genuinely new to the story

And the story itself? Is funny and fun and really covers everything the Librarians are. We see their different talents and personalities and their fun dentures. We have the whole concept of Mother Goose being real, of nursery rhymes being dangerous spells. The whole idea of children’s stories being part of a multigenerational war over world changing spells? It’s Librarians, classic, glorious, cheesey Librarians. This book is excellently part of the Librarians’ franchise and it works. The characters, the world, the story –it works

And it is busy. All the Librarians are split up and scattered and handling a hundred things at once – but, again, it works. Frantically dealing with various unforeseen circumstances from the magical fallout from the latest more thing to go wring works well for the Librarians. Frantically scrambling to do things against the clock when you have 20 things to do at the same time? This is the Librarians

Diversitywise we have issues. We have the same strong female characters from the show and their strengths are unchanged – and 2 of the heirs are also women and capable and well written while also being very different. The young academic and the no-nonsense farmer-librarian are very different women but both excellent besides that

The third heir is a Black man and it makes some interesting points about Rap and him drawing on that to address the rhymes they’re facing. He’s also just as intelligent, brave and capable as the other characters. But oh my the dialogue. Oh the dialogue- that was faintly embarrassing to read and screamed badly of trying hard.

In all, I was very pleasantly surprised by this book – because it did capture The Librarians so very well – a show I’ve always liked (in a guilty pleasure kind of way). It’s rare to see that and made this a fun extra chapter to the Librarians world, rather than being consigned to the “we will never speak of this again” pile.