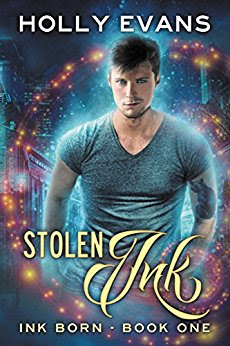 Davian is a tattoo magician – a man who can sense the magical tattoos under people’s skin and bring them to life. He’s spent most of his life hiding the true extent of his powers, hoping to avoid the attention of the Council and live a quiet life with his friend and business partner Keir and, hopefully, find a cute guy to have some fun with.

Except someone in the city is killing people with tattoos and stealing them – an agonising and terrible way to die. With his power, Dacian is perfectly placed to stop him and people are pressing him to get involved – but can he stop the killer and stay under the Council’s attention?

I really like the world building of this book – it does a really good job of taking a modern world and making it feel like a Dungeons and Dragons town. We have wizards and cars. We have elves and modern technology. It all seems to work – part of that may be not going into too much unnecessary detail at this point: it does an excellent job of hinting and shaping a lot without going into lots of details

Which is good because we can already see many many kind of wizards each of which are clearly very different from each other. We have elementals. We have fae. We have elves. We have wereanimals. We have a lot – and a whole lot of them are repeatedly touched on with excellent little details that are there to give an impression of a wider, different, broad culture (like the social nature of elves, the personalities of elementals etc etc)

This applies to government as well – we have so many hints of how this is worked related to the Council, how they treat powerful magic users and some indications of the way powerful supernatural forces interact with this organisation

Again, no-one sits down and starts expositioning lots of information about the society – because that would make absolutely no sense at all and would really clutter up this beginning book. But it does an absolutely awesome job of portraying an amazing world without dragging down the story

On top of that the actual focus – tattoo magic, the magic that Dacian and Keir have and the very foundation of the plot of this book. This shows how much imagination and detail can actually go into world building when it’s necessary to the plot

Unfortunately the story does kind of drag in the middle. Dacian spends a lot of time not knowing what to do, he’s kind of been tapped by several people as the one who should do something about the serial killing. He’s understandably reluctant since he’d rather keep his magic secret (and pretty much everyone seems to know he’s more than he seems) and he definitely doesn’t know what to do. So I can get that there’s a bit in the middle of the book where Dacian figures out what he can actually do

But it kind of waffles. What’s there is good – it’s Dacian’s normal life with his excellent relationships with Keir his best friend and Isaiah his love interest and Vyx who joins them. And it’s all fun but the fact there’s a serial killer on the loose seems to be too low a priority.

On LGBT characters I really love the depiction of the gay characters in this book. Dacian, our protagonist is gay and one of the very few gay protagonists I’ve read in this genre I haven’t hated. He isn’t stereotyped, he isn’t sexless but nor is he sex obsessed. He’s in a relationship with a man much smaller than him – but it isn’t depicted in the very reductive “strong vs weak” portray we seen so often in so many portrayals of gay romances, with Isaiah being capable, magically powerful and having his own life, his own goals and his own pathway to success quite apart from Dacian. Dacian has also shown sexual attraction towards many other men as well – definitely avoiding the whole “gay for one man only.” Their lives are not defined by oppression or their relationships and there’s a refreshing lack of tragedy, helplessness and general woe that seems to be so common in books that don’t centre around constant humping. We do have a bisexual character, Keir, who initially I had little time for as he seemed to be a sex-obsessed nuisance –but he as increasingly developed with more levels of nuance and his arrogance is more closely linked to his magic than any other part of his character

I also love that they depict that Keir and Dacian as having a close friendship, even one where they’re very tactile with each other but the fact they’re both attracted to men doesn’t mean that has to be sexual. Gay men can be friends with other gay/bi men without having (the shock!)

We do have some POC among the wereanimals who play a prominent role in the book; Faru is one of the driving forces behind forcing Dacian to step up to the fight as well as being one of the main drives to take down the ink stealer.

We also have Vyx who is an interesting character and has no interest in sex or relationships at all, an asexual character – and is quick to smack down anyone overly pressuring her. She’s also an excellent portrayal of an outsider in society who isn’t reduced to. She also provides a capable and repeatedly present female character which is desperately necessary because while there are a number of female side and background characters in the book they’re not exactly prominent or meaningfully present

In all, I’m loving it – I would love to see a lot more like this and it has definitely exceeded my previous (admittedly low) expectations. This is a story and world setting that existed for their own sake and included gay characters as full characters fully involved in the story and with excellent character interactions and awesome hooks for future books.