Gender and Relationships in the Mercy Thompson Series 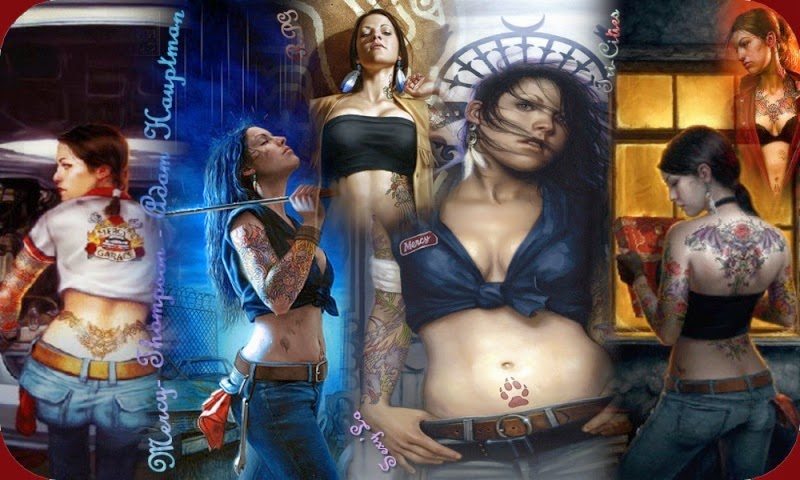 The Mercy Thompson series is a very popular Urban Fantasy series written by Patricia Briggs. When we first met Mercy, she was a fiercely independent female mechanic who had the ability to shift into a coyote. Over the course of eight books, readers have gotten to know Mercy, her friends and the world which Briggs has created quite well. For the most part, the Mercy Thompson series has been interesting to read but like any other book in this genre, it has not been without its share of problems. It would be far too easy to dismiss gender as an issue in the this series because the protagonist is a woman and the author is also female. One would think that at least in this area, a reader could consume an unproblematic story but that is not the case - and we should be wary of assuming strong depictions of women (or any marginalised person) just because of the author.  Despite all of the good qualities in this series, gender representation is an ongoing issue.
Like many Urban Fantasy protagonists, one of the most glaring problems with Mercy is her treatment of and relationship to other women. So often in the genre we find strong, capable female protagonists fully in charge of their own lives - but they are exceptional, they are special women. Other women in the series rarely match them for strength and depth of character.
Most blatantly, other women simply are not present - or not present to any great degree. Mercy lives in a very male world. Obviously, as a straight woman, her love interest is Adam and Adam dominates much of her life, but even outside of Adam most of the people around her are men. She worked with Zee and then Tad - both male. Her main contact with the vampires has been with Stefan - male. Back when she lived with the Marrock, the main contacts she had where with him and his son, Samuel and, to a lesser extent, Charles. Her closest friends - Warren and Kyle - are both men. Most of the pack members are men - and, in common with many other series - for some reason women just don’t turn into werewolves very often. She has a somewhat fraught - and definitely low contact - relationship with her mother.
There are very few women in Mercy’s life - and the only one with anything resembling a close relationship with her is Jessee, Adam’s daughter and, of course, a teenager not a peer.
This lack of female equals is already very much an element of this trope - but what women she does meet are usually antagonists. The few female members of the pack are very hostile to Mercy - Honey being the only one starting to thaw towards her in the latest book. Marsilia, the vampire head of the local Seethe, has certainly clashed with Mercy pretty viciously. Mercy even clashed with the Marrock’s wife when she lived in the Aspen Creek Pack (apparently more so than with the Marrock himself). Even her relationship with her mother is fraught and difficult and contains, at best, a kind of understanding contempt of her mother and she appreciates the distance between them.
Any women Mercy seems to build any kind of a respectful, peer relationship with - or has the potential to - are brief appearances, usually confined to one book; while her female enemies are much more prominent.
This comes to a head in the latest book, Night Broken with Adam’s ex-wife who is almost comically awful to Mercy. Because a woman fleeing from a murderous stalker who has beaten her and destroyed her life really has time to play petty “catty” games? Apparently so! This frankly ridiculous caricature of spiteful womanhood, in turn, is presented as an extremely weak justification for Mercy herself sharpening her claws for a truly cringeworthy take down of a battered woman seeking refuge. By the end of the book, the conflict was almost comic in its awfulness, with Mercy wanting to send Christie back to her abuser and Christie wanting Mercy to die on her hospital bed.
But the paucity and problems with other women in the series are not the only problematic elements of this book when it comes to female representation; we have to consider her relationship to Adam.

When Mercy first met Adam, she had been forced out of her home by the Marrok - Bran. She was determined to live independently and resented the idea that Adam moved next to her to watch over her. She chafed at the very idea of needing a guardian because she was very independent. In response Mercy did things like moving a broken down car in Adam’s line of sight because he hated to look at it from his bedroom window. Any way that she could be an irritant, Mercy jumped on it.
When the relationship began to develop between Mercy and Adam her agency began to significantly diminish. Suddenly Mercy moved from being fiercely independent to an object that
needed to be protected and controlled. It began quite simply with Adam referring to Mercy as “his”, which is not endearing and speaks of ownership or possession. Dominance issues repeatedly occur in interactions between Adam and Mercy which invariably cause Mercy to do things like lower her eyes, make her posture submissive and even deliberately consider what she is saying for fear that she might upset the mighty alpha. Of course it’s all justified by the fact that Adam is the alpha of the pack (a classic case of Explained by the Woo-woo). Accepting it on this basis ignores the way in which gender plays into this interaction. Sure, all wolves must show submission to Adam but no one is put in their place more consistently than Mercy. Even at the onset of their relationship when lovers are more apt to be kind, Adam is quick to apply pressure.  He declares his love for Mercy in Iron Kissed and Mercy is told that her refusal to declare instant true love for Adam was endangering the stability of the pack. Yeah, no pressure, really.
When Mercy is assaulted in her garage Adam uses the occasion to install video surveillance. Of course, Adam just wants to keep Mercy safe and nothing says I love you like 24 hour monitoring. All of this is passed off as his natural concern for Mercy as an Alpha whereas in the real world, Mercy should be packing her bags and running. By the time we get to River Marked, Mercy cannot even talk to another man without Adam getting upset. His jealousy continues to grow, in Night Broken Mercy even has to consider what she wears to bed in case they are awoken in an emergency - not because she’s self-conscious, but because Adam is so jealous he wouldn’t tolerate her being scantily clad in front of other men in even in a crisis situation. Adam continually wants Mercy by his side and complains even when she wants to go Walmart by herself. Unfortunately, Briggs justifies his controlling behaviour by having Mercy attacked at said Walmart.
Each and every time that Adam attempts to control Mercy, it is always justified by the plot thus masking this manipulative and frankly abusive control - which is a common trope in Paranormal Romance. In Night Broken, Adam checks the security tapes to see why Mercy is late and even comments that she should not be alone working in the garage. Of course, Mercy is then attacked in that garage thus justifying the fact that her creepy husband now won't let her work alone and insists on being aware of her every movement throughout the day.
There was a time when Mercy would have actively resisted being treated like this. The Mercy at the beginning of the series would be busy planning some sort of passive aggressive prank to assert her independence and declare that she couldn’t be controlled and most certainly wouldn’t be someone’s possession. Where did that woman go and why does falling in love mean the loss of independence? Mercy may be able to fight to protect herself, change into a coyote and run at incredibly fast speeds but when it comes to her romantic life she is little more than weak woman waiting for a man to tell her what to do for her own good. It’s sexist and supports narratives which are used to explain away gender based violence.
For all of the amazing storytelling that Briggs has managed to include in each book, when it comes to gender the Mercy Thompson series has failed and continues to fail in each new installment. We have a female protagonist who naturally cannot manage to develop any sincere relationships with women who are around her and in turn is controlled by the man in her life in the name of love.
It’s sad when you have a character with so much potential that began so well, but is still dogged by so many of the tropes that plague the genre. Ultimately, she’s an Exceptional Woman, surrounded by men and in a relationship that has her constantly policed and monitored for “her own good” and the only thing more depressing than this happening to Mercy is that it happens to so many Urban Fantasy protagonists that it’s cliché.
And do we even have to mention the covers? Ye gods the covers.
Posted by Sparky at 9:00 AM