Hey credit to Van Helsing the opening was gloriously gothic and ominous with Anastasia and Dmitri bathing in blood and looking all ominous and dramatic. And then they open their mouths. 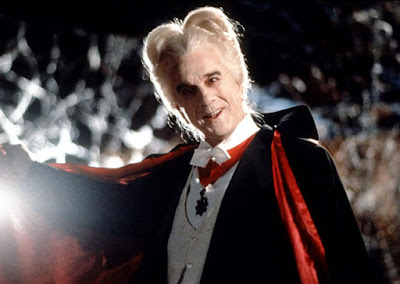 There is no way I can ever take these people seriously. Speaking of, Flesh and Lucky are also feeling the building with acting almost makes Dmitri looks plausible. Vanessa, Dylan and-still-following-for-reasons, Mohammed are also heading out.


They head off looking for safety but Anastasia and her minions do manage to track them down. Vanessa is ready to fight but it’s awkward with Dylan constantly trying to run to the vampires asking to be taken back. Mohammed instead volunteers to sacrifice himself and hold them off so Vanessa can run. And she does. Oh I will have words about this.


He isn’t killed though because a black clad figure with a katana kills Anastasia then wanders off. Ok. So ninjas now. Why not.


Instead he is found by flesh and Lucky and Flesh puts his foot down, they’re not abandoning Mohammed despite him being unable to walk. They stagger off after Vanessa

At the Resistance Raul, the current sort-of-leader is a pretty glass-half-empty-guy. First he isn’t really into the whole leadership thing but with Taka dead he doesn’t really have much choice in the matter. They turned off the power at Dmitri’s headquarters but that will come back, Dmitri isn’t dead and though they rescued a lot of people, a lot more people died. His assistant Jolene seems to be more positive.


Doc - yes, that Doc - is also with the Resistance, helping people and becoming almost a hero there with her medical skills saving many many lives including Craig, Raul’s brother. Jolene in particular looks like she’s very impressed and getting very close to Doc, praising her for all the wonderful help she’s doing and generally getting closer and closer and generating some potential chemistry

Potential chemistry, no we circle closely but don’t go there. Doc is pushing herself hard, very hard, and clearly is carrying a lot of guilt. Because this is Van Helsing Jolene helpfully points out that Doc is seeking redemption to heal herself by helping others rather than letting us work out this incredibly obvious thing.


Things start going wrong when Callie shows up, one of the survivors from the hospital with Brandan’s group. Doc desperately tries to convince her not to tell anyone about their past. This may work but blood starts going missing - Callie is stealing it to feed… Axel


Yes, who is shocked that he’s not dead? He’s not dead. He’s a vampire, refusing to feed on people and instead eating emergency medical supplies. Axel you’re a saint. Like everyone else in the world he wants to find Vanessa because SPECIAL. And she demands Doc’s help throwing alllllll the guilt at her


Doc decides she has to help because of GUILT and she may be a good person now and trying to make things better but Axel is actually the person she hurt so it’s the one she needs to redeem herself to.. This is… actually one of the few times a redemption arc has focused on the victim


So Doc steals the rest of the blood from the desperate human refugees, Jolene lets her do it because sexual tension which we will never see because Doc leaves and she and Axel go on an awkward road trip. He repeatedly snarls at her and she guilt wallows and tries to advise him on how best to ration his limited blood supply which he ignores. He’s also so driven to make her suffer that he ignores a vampire attacking her - which then eats his carefully rationed blood supply. Well done Axel


Ok, back to Vanessa. She has a moment in hope in discovering that Dylan can walk in sunlight. But that doesn’t stop Dylan slitting her throat and running when she hears a vampire. Throat shredding is only a minor inconvenience to Vanessa so she follows Dylan to where she’s found Julius, somehow, and announces she’s special to Dmitri and Rebecca. Julius plans to use her as a hostage when Vanessa arrives


Julius fights Vanessa, Dylan fights both of them and among all this fighting Vanessa bites Julius… and he turns human. Well that’s one terrible bad guy gone

This entire episode is based on people dubiously running into each other. I mean what are the chances of Vanessa accidentally running into Julius? Flesh and Lucky just happen to stumble on Mohammed? Callie makes her way from Seattle via everywhere and happens to run into the place where Doc is? Seriously if this whole story took place in a supermarket, this amount of of coincidental running into each other would be dubious. This takes place in the Pacific Northwest, a large expanse full of…. Trees and rain and… coffee and.. sparkly vampires and stuff.


Right now we have to take a shot at the racial inclusion in this show - especially following Brendan’s death. We now have Mohammed and Doc. The Redemption Twins. The two Black people on this show have both committed terrible crimes and now exist to serve and feel guilty take abuse. Even Flesh gets to be inspiration in his hope rather than being guilty. Doc and Mohammed are now both trying to follow and help/serve people who hate them and take regular opportunities to pour scorn on them while they can’t fight back because GUILT.