Once Upon a Time, Season 7, Episode 14: The Girl in the Tower 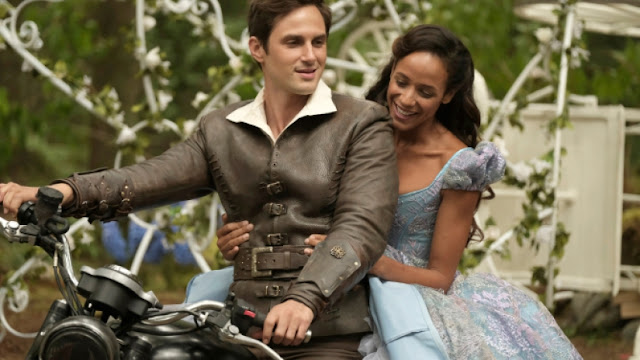 After the curse drove her dad off, Alice became ever more depressing and maudlin and… not entirely stable after having tea parties with hats and stuffed animals for presumably many many years


It’s played a little for comedy but we can equally see her pain and how much long term solitary confinement can be damaging to a person.


It‘s her birthday - and a giant troll rips the top off her tower. Other people would be mildly perturbed by this but Alice is not like most people. She greets the troll as a friend and is super happy that she’s now free. See that’s what it takes to break Gothel’s curse - a giant monster. Which then lifts her to freedom. Again, most people would hesitate to stepping into the palm of a giant monster’s hand

Some time later she goes to watch her father from afar, only to be captured by Robin as a spy. Well Robin tries to hold her at bow point but Alice runs anyway because ALICE. But she does run into a rather ridiculously elaborate trap instead so they can make introductions. Upon hearing Robin refer to Hook as “Nook” (new Hook, coined by Zelena) she decides to call Robin “Nobin”. Robin is not a fan while Alice continues to be most bizarre.


Robin is tracking a great big house destroying monster which Alice objects to because she’s good friends with said destructive monster. Robin runs off leaving Alice behind - but Alice is fast and stubborn and very defensive of monsters dangerous enough to count as natural disasters. She’s also brave enough to tell a room full of angry fire-and-pitchfork villagers (who have had their houses destroyed) that the troll is her friend and they’re all terribad people for wanting to kill it

This is not a crowd pleaser.
She’s locked up with Robin thrown in for good measure. While in prison Alice talks about how hollow her freedom turned out to be - yes she’s free, but she’s still very much alone and isolated since she is separated from her father and has no connection to any other human being on the planet. While Robin lived in an extremely close family setting in Storybrooke; in fact she found it stifling and even stole Emma’s volkswagen to escape. She also shows Alice the magical joys of smart phones


And yes, at last a character who likes technology and doesn’t entirely embrace an all medieval life.


There’s also a connection between the two which is there enough for us to point to but not so much that the writers can’t “no homo” it if an angry priest shows up. This pretty much sums up all their moments in this episode.
Robin escapes, but despite their moment she refuses to free Alice because she’s off troll hunting. She finds a big mass of angry villagers and makes a grand speech about inheriting Robin Hood’s mantle - only to have Alice jump on her before she can fire an arrow. Yes she can free herself and no the villagers are not happy. They get all menacing again and this time Robin backs Alice - but they’re still helpless and surrounded by an angry mob. They’re rescued by… a yellow volkswagen beetle

I’ll be honest, I thought Once Upon a Time had leapt off the rails and made Emma’s car into Herby.


Still it’s a useful escape and allows them more bonding time: with Robin explaining how she was pretty much a Mean Girl at school, doing anything to be popular and win approval. And she left so she could escape that only now she’s doing the same thing with Robin Hood’s name, trying to be popular when his true legacy was protecting the innocent. And thievery. And being raped by her mother who wanted to get back at her aunt who was actually in love with Robin.


Family reunions should be waaaaay more awkward than they are.


They still go after the troll and return to Alice’s tower to have more of her pain spill: because she secretly wants to return to that prison. Because in that prison she had one thing: hope for release. Now she has freedom and doesn’t know what to do; being free was supposed to make everything Ok and it clearly hasn’t.


And the troll destroys the tower


Robin makes a massive leap of logic and realises that Alice actually has magic. The troll is her creation - brought into being to free her from her tower with her intense birthday wish. Just like the volkswagen was, with her intense wish to be free from the mob. And the troll came back because Alice didn’t want to be alone


Can we take a moment and address the powerful magic Alice has that she can pretty much create anything she can conceive of if she wants it badly enough.


Which also exists in Hyperion Heights in the cursed future and it’s where Tilly has taken refuge after the whole possible murder thing. Killian arrives, assures her he’s on her side and takes her somewhere to hide - Henry’s place


Which is nice and all and finally gives Henry a presence and purpose in this episode since he’s been pretty absent for a while but it also makes little sense. I mean are Tilly and Killian really that close to Henry given none of them are awake and Tilly is wanted for multiple murder?


They decide to work to figure out Tilly’s alibi only she doesn’t really remember yesterday because of Gothel and her own fractured mind. She can only offer clues which Killian and Henry follow eventually finding her bag. While Tilly speaks to several shop keepers she visited only to find out none of them know her. She’s just an anonymous face in the crowd: Which is devastating for anyone to realise how unremembered they are but for Tilly, wounded, lost Tilly with no connections, it’s a literal existential body blow


Killian and Henry try to help her, talk to her and return her pack - only find inside the locks of hair taken for the murder victims. Now even Tilly is beginning to worry she may have committed the murders.


She runs to her carved troll, alone and sad - and is saved from walking into traffic by the return of Margo. That would be Robin’s cursed identity. They say hello, reveals her fav book is Alice in Wonderland before she wanders off. It’s distraction enough to make her hang around until Killian finds her - and they spot the CCTV camera in the carved troll. The camera is Tilly’s alibi, she’s exonerated


And Killian asks her to move in with him because her unsecure squat isn’t the best place for her with a murderer on the loose. She accepts. Father daughter reunion! Sort of.


Henry also meets with Drizilla who is also planning to make things up with her family but it’s mainly lots of cryptic curse talk.


More interesting is Regina and Lucy - who ditch the walky-talkies because we have phones now and generation Z is not here for this 80s technology. She is recruiting Lucy to do some breaking and entering (what happens when you have a cool granny) so Lucy can search Dr. Facilier’s (Samedi’s) place while Regina distracts him with a date. And she does find some tarot cards, including the death card


It nearly falls apart when Zelena interrupts the date, outraged that regina lied to her about Samedi being awake and now dating him. Samedi leaves and Regina tells Zelena the real plan and how she’s totally blown Lucy’s chance to escape


Lucy does manage to sneak out but left her hat behind for Facilier to find and confront Regina about. He happily owns up about the cards and reveals his plans: to take the Dark One’s dagger


Regina is not having this. They may have a fraught relationship but Rumple is her oldest friend… which I guess is true but “fraught” barely covers it. He also reads Regina’s cards - and he suggests the lovers are her future


And Margo catches up with them and Zelena has to face the difficult pain of her daughter not truly knowing who they - or she - is.


So we finally have Alice/Tilly and Robin together. And I am cautious pleased with the beginning with a VERY heavy following of “there had better be more than this.” I’m not saying more - because it is a very nice beginning but there’s absolutely nothing praiseworthy about this if it isn’t a beginning and generally isn’t


Which would be a double shame because Alice is extremely interesting character. Her quirkiness isn’t just being quirky, there’s clear pain and damage from her extremely isolated backstory. Alice is a woman who has spent her entire life alone, she is a woman whose childhood contained only one person - her father - and even he had to leave at times. This is a woman who has zero social experience at all - and we know solitary confinement is mentally devastating to people. Alice isn’t just quirky, she is hurt, damaged and badly wounded by her upbringing and while she seems light and jokey, her vulnerability is clear. Even her desire to return to the tower, a simpler life, a less complicated life, one with a clear hope and goal speaks a lot to who she is and what she’s endured