Brown Girl in the Ring by Nalo Hopkinson 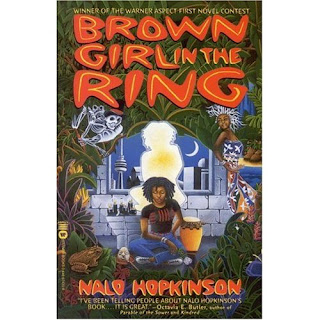 Toronto has become a ruin, a dystopian city of extreme poverty. After the riots it was largely abandoned by the government - wealthy Torontonians fled to the outer ring, leaving the inner city core to descend into poverty and lawlessness

Ti-Jeane lives in Toronto with her baby and her grandmother, who makes a living from her herb-lore and healing. Trying to get by in the torn city, her life is complicated as the father of her child gets in over his head with the criminal boss, who all but rules downtown Toronto. Unsurprisingly not only is he addicted to drugs, he sells them for a living - that is when he can stop skimming off the top. Ti-Jean comes face to face with illegal organ harvesters (note we aren’t even certain why the organs are an issue), her grandmother’s magical legacy, menacing dark magic, a neurological atypical mother, and through it all she must somehow save herself and  protect the family she has left.

This was very different from a lot of Urban Fantasy in that we focused on Caribbean mythologies, cultures and belief systems, which meant a departure from the standard witches, vampires, and werewolves, of European mythology. This imbued Dark Girl in the Ring with a world that was fairly unique, compared to many books in the genre

And in an extremely erased genre it is unusual and refreshing to see a cast that is nearly entirely made up of POC. It’s all to rare and nice to see. Though it is worth nothing that since the author is herself a Black woman inclusion in this case was expected and therefore did not amount to the surprise and wonder when characters of color appear in a book written by a White person.

Character wise, I wasn’t engaged by Ti-Jeane. I found her to be a very passive person, generally following around events rather than driving them. I wasn’t particularly engaged with any of the family and, frankly, didn’t especially care if any of them lived or died. Which is a shame, because I feel they had the potential to be decent characters - but they never really got the chance. Ti-Jeane’s boyfriend is grossly unlikeable, her grandmother we don’t see enough of to develop a character beyond grumpy - there’s not a lot to engage with here.

The only character that was really developed unfortunately was Ti-jean’s grandfather Rudy.  In his younger years, Rudy was addicted to the same drug as Ti-jean’s boyfriend Tony, but unfortunately for Rudy, when he got caught, it lead to a sever beating.  For a once proud man this was the last step.  His wife Mi-Jeane had kicked him out after he dared to hit her and now he lay on the ground with a broken body for stealing drugs.  He decided what he wanted was power and so he trapped a duppy in a calabash.  Not content with the power that a duppy created from a dead body created, he trapped his own daughter’s soul and forced her to do terrible things to feed his unrelenting desire for power and youth,

Storywise, unfortunately, it didn’t work well for me. It wasn’t well paced, I’ve read worse but I’ve also read a hell of a lot better. Passive protagonists do little for me and there’s very little driving force behind their actions beyond running from event to event. Hopkinson has a fascinating world that could have so much in it - but we never really explore it. It’s a massive wasted opportunity. There’s also a major problem with realism that breaks the whole flow of the story - it’s hard to believe the premise of this story (more on that later). All in all the story was just blah - I can’t think of anything about it that I loathed - but there was literally nothing that engaged me. I just didn’t care what was happening, didn’t care whether the characters lived or died and most of the story just seemed to follow Ti-Jeane as she wandered.

I have trouble believing the idea of Toronto city centre degrading to this degree. I could see a country having a dystopian future - but for the Canadian government to effectively write off the largest city in Canada after a year (less) of rioting just doesn’t strike me as very realistic. Toronto is a city that the Canadian government would be hard pressed to give up in the manner described in this book. I would have understood had she picked Saskatoon or Winnipeg, but as a major center of commerce, too much of Canada’s economic prosperity is located on Toronto for the government and the people to so easily walk away from.  To be fair, Toronto did survive the great depression and has been host to several riots over the years, yet Hopkinson only seems fit to give us some vague story about economic collapse to destroy a city with such a rich heritage and strong roots. Furthermore, it makes no sense that the downtown corridor would be in economic ruin while the outlysing areas remained prosperous. It is impossible for me to believe that any such violence would not have been forcefully crushed within a week after it began.  La crisse d’octobre proved that if necessary, the government can and will invoke The War Measures Act.

Similarly, I find the motivation for the organ harvesting - pigs organs carrying disease - wasn’t handled especially well. Perhaps it’s because not enough time was spent portraying the risk of the disease or the scarcity of organs - but the motivation didn’t ring true. It felt more like a politician preying on popular ignorance for votes than any kind of real pressure.  A big deal is made of hospital officials swooping in to grab the organ.  Not only has Toronto completely collapsed no health services exist there.  Even in a dystopian future this is ridiculous.  If we can have doctors in war zones, and doctors in the most impoverished areas thanks to NGO’s and organizations like Doctor’s Without Borders, how is it that these Canadian citizens, exist without even a minimal of health care? The Canadian government funds health clinics abroad, as well as shares doctors and medical equipment, and that is yet another reason why the idea of no health care in downtown Toronto is absurd.  Socialized medicine is the third rail of Canadian politics and any reduction in services would be seen as an affront to Canadian principles.

Both are minor points since the WHYS of the plot don’t matter too much in the story, but they’re elements that derails my immersion since it makes the books feel less believable. Dystopian is meant to provide us with an alternate version of the world that we live in now, however the world should never be so separate that causes the reader to doubt the validity of this alternate universe.  To some degree all books in the urban fantasy genre require the suspension of believe; however, Hopkinson asks t the reader to move far beyond that into a completely imaginary world that has absolutely zero basis in reality.


There are some gay characters that appear in passing, but I’m not overly impressed. One is a bit villain (not even a main villain) and the other is a kid who shows up for 5 pages to heroically sacrifice himself to save the protagonist. Such tokens are less than ideal.  When we consider that Toronto is one of the three gay meccas in Canada, it is ridiculous that there were so few GLBT characters.  Where did they all go?  Are we to believe that all GLBT people are so rich that they fled and moved to the suburbs?  Way to push a stereotype.  Just because you happen to be in the GLBT community does not mean that you were born in a silver spoon in your month.  If we give her the benefit of the doubt and assume that she had three gay characters in the story because she was made a focused attempt to include traditionally erased people in her book, the fact that there are so few to represent a community that is large heavily implies that they all fled and this would be a sideeffect of the way that Hopkinson has chosen to create a dystopian version of Toronto.

On the whole, this book is easily forgettable. It’s not especially objectionable or hateful, it’s not a book you will email your friends with passages saying “look how awful this is” it isn’t a book you will rant about - it doesn’t actually engage me enough to hate it. The characters, the story, the writing, the world - there’s not enough there to hate. It’s dull, it’s blah. It’s boiled potatoes without butter or salt. It’s bland, it’s there, it’s not objectionable, you can’t hate it but nor can you really enjoy it.