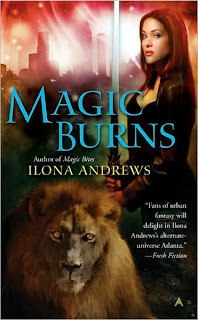 Kate Daniels, Magical Mercenary and liaison for the Order is faced with a new, confusing challenge in the dystopian world of magic ravaged Atlanta. Old gods are being invoked by witches who seem incapable of understanding what they're calling and monstrous creatures from the depth of mythology are roaming free hunting – hunting a little girl who has lost the last shreds of her family and has been deeply betrayed.

Kate steps forward to protect the child, find her mother and find out exactly what these monsters are – monsters that can always find her and keep coming back. Only to find that the entire city of Atlanta stands at risk of destruction unless she stops it.

And there's a flare coming. Magic waves are coming more and more often – and more and more intensely, causing friends to become ever more unstable and everything more unpredictable. When magic flares, gods walk and no-one is safe.


This story started slow with a great deal of confusion because so much was happening. Despite that I think it was a good beginning because it carried the theme of unknowing and being lost that characterised so much of this book. The characters are strong, dominant and active people who are frustrated by the lack of knowledge and the events that run away from them – and always with the looming menace of the flare. I think that Ilona Andrews has an amazing grasp of theme and can really set the tone of a scene or a book

Kate has elements of Keille Independence still, she often plays the smart arse for no good reason – but it's far better than many we see in the genre – and the guys she's mouthing off to kind of deserve it. There is a moment or two where it seems Kate isn't, perhaps, the brightest of bulbs but it's not grossly obvious and there are more than enough extenuating circumstances. In general I find her strong, powerful, funny and mysterious – I want so much to know her secret!

The world – well, the world is amazing and it keeps growing. The flaring magic, magic and technology wrestling back and forth, and now we're introduced to witches and shamans and gods and demigods and creatures of legend. There's so much here and it's so original – the take on everything is so different from what I've seen elsewhere. It's a unique world, and even without the story I think I could happily sit down to just endless info dumps of the setting. Yet there are no infodumps – Ilona Andrews hits the right balance of explaining the world by showing it – there's no long lectures or convoluted info dumps, and at the same time we know enough about the world to be intrigued and know what's happening

There are, however, problems

An extremely tiresome theme in this book is unwanted sexual advances and grabbing. Bran,. The Morrigan's knight continually comes on to Kate even when she not only makes it clear that she's not interested but even after she breaks his nose – he continues not only to come on to her, but to grope her as well. Saiman, Kate's long time contact and shapeshifter is unstable because of the surge – and aggressively comes on to her. And Curran? Repeated nos and that he ignores (more on that later). Even the werehyena men make a pass at her. It's repeated so many times that it's beyond disturbing. At some points in the story Kate even accuses the men of considering raping her – and they get duly outraged and offended. But with them repeatedly pushing despite the nos, it's hardly a completely out there suggestion.

And on to Curran, who may actually cause a re-naming of the Hauptman Effect because he's such an embodiment. Curran is the king of the weres and expects obedience and obeisance from those around him – including repeatedly from Kate. Worse, he regards her rejections of his come ons as an insult, more – there is a very disturbing scene with the werehyenas where they explain to Kate that several of Curran's actions indicate him pursuing her as a mate – and she is not just worried but outright frightened by this since Curran “always gets what he wants” which, frnakly goes way beyond being merely icky. Of course, all of this is Explained by the Woo-woo of him being a werelion

There are POC in the books but not an awful lot – bit parts and occasional walk ons. It's a pretty huge erasure, especially when you consider that the book is set in Atlanta. There are some POC, but usually only in passing or in the background. There is nearly complete GBLT erasure – there is one possible bisexual werehyena – but that is somewhat problematic in that the werehyenas are portrayed as sexually debauched (or, frankly, great fun :)). And I think she dies as well.

It's a shame there are these fails because, really, this book is a great book and great fun to read. I'm much happier with fails in crappy books because then I can throw the whole lot out – here there's a baby in that bathwater. I liked the story, liked the characters and loved loved loved the world. I am eager to pick up book 3 and heartily recommend the whole series. I regret that this book has been lurking in my kindle for so long ad it took me this long to get round to the series.