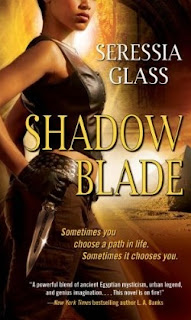 Kira was born with a power – she knows things and people by touch. One touch and she senses thought, emotion and experience. And she drains their power, their life force and sometimes leaves them injured or dead.

An orphan, her powers quickly confused and frightened her foster families – until she was taken in and raised by the Gilead Commission, a secret organisation that polices the magical beings of the world – and leads the forces of Light against the chaotic destruction of the Shadow. Kira was brought up as a member, a warrior, a Shadowchaser, one of the elite of the Commission to hunt down the most powerful agents of the Shadow.

And there is one of the most powerful agents in Atlanta, hunting down a 4,000 year old dagger of incredible power. Her mentor died to bring it to her and the immortal owner of the dagger, Khefer, has followed to retrieve and protect it. Kira must fight through her grief, protect her friends and work with Khefer to banish the Fallen and stop more lives being lost- and to stop her own descent into the darkness


I found the story generally good – agent of light fighting the shadow isn't exactly original, but nor was it done in a way I found dull or boring. There is a growing romance between Khefer and Kira but, despite my worries, it never takes over the plot beyond odd moments of Kira's shock that she can touch him. The plot remains focused (to a degree) on the actual plot and decent characterisations. It was interesting and kept me engaged and never once made me think I should be cleaning the bathroom or some other unpleasant task to help me avoid reading

My main complaint with this book is one of pacing, especially towards the middle of the book. There's a time when there are no leads and no particular direction and Kira and Khefer just seem to drift around not doing a whole lot. There were a few incidents like that throughout the book – and it's exacerbated by the fact that they don't actually do a whole lot until the end. They wait for something to happen, then react – there's not a lot of pro-active activity from the protagonists, even though they're not passive people. Given the severity of the threat they're facing, it feels vaguely like picnicking in the path of a tsunami.

My secondary complaint about the story is that the ending was anti-climactic. We had a lot of build up and it sort of fizzled for me. Needed more epic, yes yes it did.

The world is interesting and broad with a wide variety of supernatural beings as agents of the Light and Shadow with a fair amount of magic and supernatural power. There's a strong emphasis on Egyptian deities since Khefer is dedicated to Isis and Kira dedicated to Ma'at and both feature as powerful forces, but we also step beyond the Egyptian pantheon with Anansi being present, albeit in a weaker role. It's an interesting world, a large world and while it's not super-unique, I suspect it will have a less common focus than most world building we see – I look forward to reading more of it

Characterwise I generally liked the main characters and their interactions. Even side characters like Zoo and were interesting and I wanted to know more about. Khefer and Kira are both very real characters, I liked them and I would love to see more of them. I do think Khefer is excessively paternalistic at times towards Kira and doesn't always fully acknowledge that she's a powerful warrior in her own right – but when he does that Kira usually calls him down for it. Kira has, unfortunately, elements of Keille Independence that annoys – her aggravation to all things authority is excessive and unnecessary. She's also made it clear she isn't a planner and tends to run off half cocked at times. It's not quite Spunky Agency.... but it could develop into it if we're not careful.

I love Nansee, but at the same time am not especially happy for Anansi, the trickster spider god of west Africa to be reduced to such a subservient role. I'd like his status as a deity to be more emphasised

Social justice-wise, Kira is a strong, capable independent woman most of the time, though she has more vulnerability than I'm happy with and there's a lot of angst and soul searching with male comfort going on. It's not unjustified but I would be happier with less of it.

The vast majority of the cast are POC. Kira and Khefer are both black, most of the friends they have are black, most of the side-characters we meet are POC. It's refreshing to see and nice to see an Atlanta that isn't white from edge to edge. The characters are decently done and there's not an abundance of stereotyping that I can see.

Sadly, and unsurprisingly, there are no GBLT characters at all.

On the whole, this book was a decent read. I won't say it was an amazing read, the story isn't original enough, the characters not quite compelling enough and the pacing not epic enough for me to say it's an “edge of your seat, couldn't put it down” read. But it's a good read nevertheless. It's interesting, the characters aren't unlikeable, the world is wide enough to be worth watching – it is a book i'd recommend. I do think it's also a series that is going somewhere and can develop well – I'll be more than happy to pick up the sequel. I feel I'm damning with faint praise here, which isn't my intent. I enjoyed this book and would recommend it - it's a good book and worth a read.