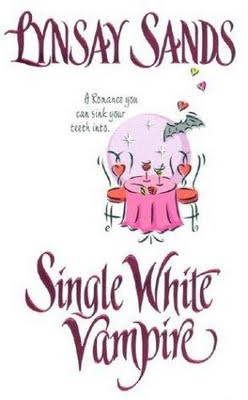 Once again Marguerite Argeneau is determined to play matchmaker for her children.  This time Lucern the family author becomes the focus of her attentions in when Kate his publisher shows up quite  unexpectedly at his home.  Lucern is a sour man of few words despite the fact that he has made a living chronicling the family's romances. His books have become a great success with his fans and Kate wants him to do a book tour and a few interviews to help continue to promote them.  Lucern is of course very resistant to the idea of this and tells her no immediately, unfortunately for Lucern, Kate is unwilling to take no for an answer.

Marguerite manages to talk to Lucern into agreeing to do a romance conference, which puts him into close proximity with Kate for a week.  This is where the becomes much less enjoyable.  When Lucern meets Chris, another editor, his first question is, "are you a homosexual"?  This question set the tone for much of the book in terms of fail actually.  When Kate walks in on Lucern attempting to get a quick bite from Chris she immediately fumes not because she has walked in on what appears to be an assault but because of the very idea that Lucern might be gay.  It seems that since Kate is attracted to Lucern that he has no right to be gay. If that were not enough, Lucern then attempts to seduce Kate because his manhood is affronted and he has to assure her that he is indeed a straight man.

Sands did try to interject some humour into this story.  At the renaissance ball Lucern unfortunately gets the table cloth twisted into his codpiece.  This of course leads to a comedy of errors to free the author.  Proving that she is quite aware of how gender dynamics work, Sands notes that Kate is shamed for this incident while Lucern is congratulated.  This plays into Lucern's complaints throughout the book about modern independent women.  At one point he mentions that women don't know their place in this generation, making Lucern an extremely unlikeable character. When he gets frustrated with Kate he refers to her as that woman and quite unsurprisingly his frustration occurs whenever she acts independently of him.

When they finally manage to agree to have sex, Kate pauses to ask about condoms and he confidently tells her that sexually transmitted disease cannot live in his system.  He assumes that this is the end of the issue until she points out that his body still produces sperm.  I was actually quite surprised to see a conversation regarding sexually transmitted diseases and contraception in the book.  Quite often characters in this genre hop into bed casually without contemplating any repercussions which is indeed responsible in this age of HIV.

Getting condoms however turns out not to be an easy task.  When Lucern calls down to the front desk to get condoms sent to his room, he is overwhelmed with the choices offered to him.  Even as he discusses this, he worries constantly about the state of his erection.  When he learns that it will 30 mins until they can be delievered he decides to just keep Kate busy with foreplay until the condoms can arrive. Unfortunately for Lucern, Kate is ready for intercourse long before the condoms arrive and he excuses himself saying that he left them in the other room.

Fear of losing his opportunity to have intercourse, he barges into Chris' room certain that because Chris is a man that he will be in possession of a condom.  Chris is horrified waking to a naked Lucern and demands Lucien remove himself because he is erect penis is pointing in his direction.  Lucern begins to beg when the bellman arrives sporting several packages of condoms.  Because Lucern is naked Chris answers the door but the bellman is still able to see a naked Lucern and surmises that they two men are gay and are about to engage in sex.  This greatly upsets Chris and Lucern is forced to wipe is memory.

As you may have guessed, this book once again does not have a single gay character and yet, gay men are routinely played for comic relief in this book.  Characters regularly express disgusted at the thought of being perceived as gay, and see it is an absolute challenge to their manhood. That this heterosexism was turned into humour was absolutely terrible.  I think that Sands would do better to just erase the GLBT community as she has erased POC.  I know that Sands is attempting to contribute new ideas to the paranormal romance and to vampire fiction in general but doing so while infusing her work with the most base of isms, absolutely detracts from all of her efforts.  It's a case of a good story and an interesting world ruined by an ism.

I suppose because straight women are the target audience for this series that Sands felt that what she wrote would not be objectionable but that assumes that none of her audience is socially aware and at least in my case, that assumption is wrong.  I don't find the purposeful debasement of marginalized bodies to be even remotely amusing and I for one am tired of comedy being used as a justification for oppressing people. In truth, I have now lost faith with Sands and her ability to truly offer something funny and new to this genre.  She has simply offered a different path to more of the same.