Review: Lord of Misrule by Rachel Caine, Book 5 of the Morganville Vampires series 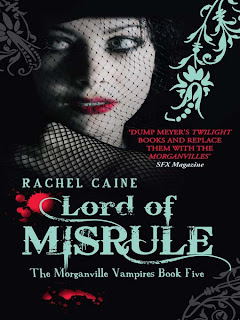 All out war is now tearing through Morganville. Bishop and Amelie have gathered their forces and their factions and are feinting against each other in an underground conflict that could literally tear the town apart.
Parts of the town are burning, others in ruin. Refugees are flooding to the few safe spaces and among them many humans are finally seeing a chance to throw off vampire control and are lashing out and rioting in rage. But not all of their anger is directed against the vampires – humans who are seen as collaborators are also being targeted and all pretence of rule of law is threatened. In such chaos of course Shane's dad has to come back to town.
Even without the riots, humans have to wonder what the future holds – which vampire master or none at all?
And if that wasn't enough – the stress is accelerating the vampires' disease. The more they remain under pressure, the faster the disease spreads and the more confused, frightened and uncontrolled the vampires will become. A cure becomes more essential as the battle heats up.
And there's a storm coming, extreme weather rolling in to add more chaos and destruction to the already torn town
I actually had hope when this book started. The war was on and Claire was being taken into combat missions by Amelie (ok, not entirely sure why, but she was involved!) Then she was running around in the daylight checking in, keeping lines of communication open, securing supplies... She was involved in the story! She was part of the main plot! We were actually going to get a book of stuff actually happening!
Then she decided to go home and fret. Or go to university and fret. Or go to the coffee shop and fret. Or think about the medicine and fret.
And it was doing so well! But no, we quickly end up in the common pattern for Morganville Vampires – Claire sat around fretting and not doing anything relevant to the plot while stuff goes on around her. It's immensely frustrating. It's like reading a war story – from the point of view of people in the next country reading the news. Occasionally it will spill over into their back garden, but they'r ejust not involved in most of the plot at all. And it's annoying because there is something happening. There's an outright war tearing apart Morganville, two massive, powerful factions, humans rising up against vampires and vampire collaborators – aaand Claire is not really involved in any of it.
It makes it worse because when Claire does get involved it looks convoluted – inevitably because she's been targeted by the enemy (for no apparent reason) or because she has made a ridiculous decision to leap into the middle of events she barely understands. In this case she manages to do both – she's kidnapped (for no apparent reason) rescued, the super secret plans are given to her – including the fact that a building is going to be ground zero of a war zone and not safe – so of course that's where she goes.
It was an improvement on the previous books. There was pertinent action and involvement at the beginning and end of the book – albeit in both cases Claire seems to have been dragged into the action against all common sense and, frankly, sensible reality. Claire's decisions are not QUITE as ridiculous as before either – but this is largley due to the fact she doesn't make many and largely just follows orders (why these imperilled and desperately warring vampires feel the need to involve a 16 year old college student with no military skills in their plans is another matter) but, yes, it was less boring and less frustrating.
I did like to see what was happening with Monica. After persecuting and bullying her fellows to the point where she was responsible for many of their deaths, she is finally facing some consequences of that. Mobs chae her, and, more powrfully in some ways, other students force her to wear signs labelling her victims and calling her a killer. I also liked Monica's come back pointing out that none of them supported her victims before and they were all far too eager to keep in Monica's good graces. It was a a nice scene, I thought, making it clear the damage bullies cause and also mentioning the lack of support their victims get – I wish we had seen more of it, actually and seen it developed more.
Except, of course, Claire can't quite be unsympathetic towards her and once saves her life...  this would be the woman who, as Claire openly says, tried to murder her and later tried to have her raped. And this is the second time Claire has saved her – Claire, ask the mob for your own blunt instrument next time, please.
There's also an interesting commentary on revolution – on people who are oppressed and hurt generation after generation, how that anger builds and eventually they lash out – sometimes against the oppressor but often against any scapegoat or vulnerable person that will come to hand. I liked the comparison with the French Revolution and was less amused by the comparison to racist riots since it misussed a huge chunk in the explanation. Again, it could have been developed more
We also have a black woman who gets some page time. Not much, mind, but more than just a little (more than Gramma “walking mammy stereotype” anyway). She is a marine with big muscles and combat skills, aggressive and hard and tough – so, yeah pretty stereotyped as well.
So, yes, it was better than what had come before, that’s certainly true. But I didn’t like the previous books at all, I’d much rather see a protagonist who is more central to the story and didn’t irritate me so much. Still, I have more hope for the next book than I did before.