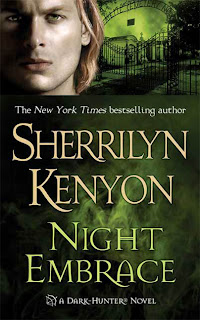 Talon is a Dark Hunter. Sworn follower of Artemis, he hunts down the soul devouring daimons that plague the world from his base in New Orleans.
And it's a major job. Mardi Gras is coming, which always attracts the daimons in droves. And to make things harder, the Dark Hunters who are supposed to be backing him up loathe each other – and him – making it even harder for them to work together than it usually is.
And there is an additional threat far above and beyond daimons. The Celtic god of war, Camulus, the Greek god of excess, Dionysis and the ancient Atlantean immortal Styxx have formed a pact together. A pact to reclaim their lost power and godhead by raising an entity far darker and greater than even them – though whether they can control it is another matter
And to complicate matters, Talon meets Sunshine. New Age hippy, naieve, scatty, carefree, loving, kind, independent – and immensely attracted and attractive to Talon. The soul of his wife resides in her body and his ancient love is kindled anew – but how can he keep her alive in the face of Camulus' vicious curse and his duty to Artemis?

This book began in a similar way to Night Pleasures. Not that the plot was similar – but we had a similar format – some random stuff happened, the main man and main woman meet – and then devote pages and pages and pages and pages to how
And then we have sex. This is before we've had more than the tiniest thread of plot. I actually double checked the author to make sure I hadn't picked up a Laurell K Hamilton. And the sex is long and keeps on going and going and going.
Oh and on the second day of sex, Sunshine is already thinking about the consequences of marriage with Talon. Now, I do think her thoughts on marriage, sexism and how women are commonly expected to sacrifice for their husbands rather than the other way round are extremely on point and very well put. However, at the same time I think hearing wedding bells the second night you've had sex with a guy whose surname you don't know is, perhaps, a trifle premature.
In the face of that, the rather rapid pace of the relationship going from complete strangers to eternal true love in less than a week seems almost normal.
I also have to say I'm not a big fan of the whole “reincarnated lover” thing. It feels a trifle lazy – there was no need to build or develop a realistic romance between Sunshine and Talon – it came pre-made. And while Sunshine had some valid and what could have been interesting concerns about Talon being in love with her previous incarnation rather than who she is now, it's never really addressed. Talon reassures her and it kind of drifts away.
I do like the character of Sunshine. She's fiery and strong while at the same time very good, kind and very funny. I hope she makes an appearance in later books and we can see more of this full, detailed character
I would say the gods are portrayed as being a little infantile and petty but... well they ARE the Greek gods, after all, and they're not the most mature pantheon out there.
Unfortunately, the very premise of these books kind of requires the protagonist in every book to have a terrible angsty back story. While it doesn't cover childhood torment, it still reminds me a lot of the eternal Abused Youth in Urban Fantasy Trope and it has many of the problematic elements of it. Not least of which is these characters don't seem to have much personality or character outside of their terrible, tragic past. That said terrible tragic past both a) lasts for literally a dozen centuries or more and b) is cured in a few days by the Love of a Good Woman (Magical Healing Vaginas!). I also find it hard to be sympathetic with them because the tragic past is so common that, again, I become jaded, take it for granted and have trouble accepting their actions that are caused by their trauma because trauma is the default. In particular, I found it hard to see anything redeemable about Zarek – he's abrasive and nasty to those around him and for good reason because of his terrible, traumatic past – but Julian, Kyriakos, Talon, Wulf, Acheron and even Nick has had a tragic past as well. And while different traumas affect different people in different ways, it's hard to understand and sympathise with the tortured arsehole when he's surrounded by tortured saints who have also being tortured, oh how sad and tortured.
And we have an added problem in this in that rather than current character development or plot forwarding, instead we have long long flashbacks into the Tragic Past. Which isn't especially character building so much as make it clear how very tragic their tragic past was and oh, isn't it tragic. Which means, between the Tragic Past, the Lust and the Sex; the plot is somewhat squeezed out or not nearly as prevalent as I'd like
The plot itself, what there is, is interesting and intriguing. But I'm somewhat disappointed that the build up (what there was) and the whole plot kind of fell apart simply because the bad guys plan simply wouldn't work. The protagonists quite simply didn't really need to intervene or thwart (which is a good thing because they don't spent a lot of time thwarting) the plan simply wouldn't work. This makes the story fall flat for me because the protagonists quite literally didn't need to be there. Also, there's big bad menace happening, possible end of the world stuff – and the protagonists and co don't actually do anything. There's no counter measures, no hunting down the bad guys, no real attempt to identify who the bad guys are. The Good Guys spend more time bickering amongst themselves than actually doing their sworn duty.
The series has a vast amount of erasure of marginalised bodies so far. Sunshine is half Native American but we have no cultural signifiers beyond her surname, though thankfully any woo-woo she has comes at least equally from her maternal line. And why is nearly everyone in these books blond? Especially for a load of Greeks and Romans?
I didn't like this book – I thought the sex and lust was too dominant, we were too slow getting to the plot. If you're happier with a higher sex content in your books than I am, then you'll probably enjoy it a lot more. To me, the sex came too soon, too suddenly and was a distraction from what could be a very interesting world and a fascinating story with some potentially compelling characters. And part of my dislike is because, yes, I do praise the world and the story – there's a lot of potential there and it feels very wasted to me.