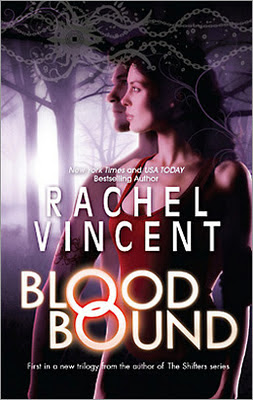 Vincent created a very interesting work in this book.  Basically, there are normal humans and there are enhanced humans.  One is born enhanced or one can have an infusion of enhanced blood to temporarily gain extra skills.  These skills include: tracking people through their name or their blood, binding (the ability to enforce a contract in which default can lead to pain or even death) the ability to walk through shadows,  blocker (someone who can hide the presence of a gifted person) and a seer (someone who can see the future as well as the repercussions of decisions).  As you might imagine these beings are very powerful and they are made even more so because the government refuses to acknowledge their existence.  This means that crimes committed by them don't get investigated by the police, thus giving them the ability to create massive underworld crime syndicates.
Liv's problems begin when she is approached by Cam and Anne about a missing it child.  Cam is her ex boyfriend and true love whom she left in a lurch after being told by a seer that one of them would kill the other.  Anne is a former childhood friend whom she was accidentally bound to.  All Anne has to do to get her to comply is to ask her for her help.  It seems that someone broke into Anne's house and killer husband and now the widow wants justice. Anne chose Liv because she is one of the best blood trackers and because the binding means that she is unable to say no.
Everyone has secrets in this world and everyone has past actions that they are trying to hide.  How can anyone truly be responsible for their actions when they can be compelled to do anything at anytime? How can anyone ever be trusted? Even as Liv is being compelled by Anne she is simultaneously being compelled by Cavazos the crime bus to find his missing child. This is why it is hardly a surprise when both acts of compulsion lead to the same child.
The problem with this book is that it never really felt like tension was actually building and by the time I reached the climax, the identities and secrets were hardly a surprise because of the heavy handed manner in which Vincent doled out information.
I will say that her protagonist Liv is extremely smart, if a little to quick to sacrifice herself for others. I understand her actions under compulsion, but what I don't understand is the fact that she is continually willing to take on the burdens of others.  Even when it is clear that she has been manipulated by a woman that was her childhood friend, instead of being truly enraged, she is in wonder about her ability to orchestrate events even from the grave. How many times can one person turn the other cheek?
There is also a good deal of violence against women and children in this story but I was relieved to find that unlike far too many writers in this genre, Vincent never once lead us to believe that this was acceptable, or the cost of love.  Liv does not wait to be saved by her prince and actually saves him far more often than he saves her.
It is also worth mentioning that the only character of colour was summarily killed off before we got to know anything about him.  It seems even in the most inventive worlds, people of colour only exist to move the plot around, not to be a focal point of the story. The world was also exceedingly straight.  There wasn't a single mention of LGBT characters.
The hardest part about reading this book, was the constant change in perspective.  At times the book would be told from Cam's point of view and at others from Liv.  This gave the book a lack of cohesion and at times made it difficult to follow.  I would much have preferred if Vincent had simply picked a character and went with that.
Blood Bound had a unique story to tell but I feel like it missed it mark largely due to the form in how Vincent chose to tell the story.  I am convinced that this world can and will go somewhere far more interesting and so, I will read the second book when it comes out. Before you run out and buy it however, this is definitely a book I suggest that you borrow from the library or a friend.