Review: Guardian of Fate by LJ Kentowski, Book 1 of the Fates Series 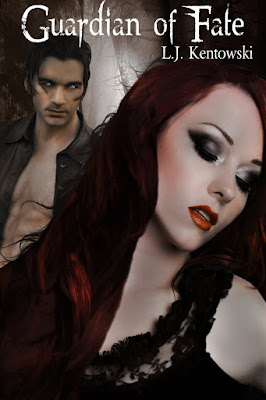 Cassandra is a Guardian, her job is to save human souls. Demons, shadows, stalk humanity, targeting people, hunting them down and then killing them in perceived accidents, their souls then descend to sheol – hell – where they are enslaved as the demons prepare for their war against heaven.
Cassandra saves those souls, her visions guide her to the targeted humans and give her the chance to change things, to push the victim away from the crashing car, to pull them out of danger, to save them from the shadow-manipulated chance that would kill them.

But her life just got a lot more complicated. The Shadows have changed their ways of working and a new threat is targeting the humans in her visions. Worse, she has come to the attention of a different form of demon – and these Seekers don’t hunt humans, they hunt Guardians. And Cassandra, with her newly revealed ancestry and bloodline is a prime target for them.

Her life uprooted, she has to decide what to do – and which of the disturbingly attractive and oddly compelling new men in her life to trust all the while being hunted by demons and discovering that everyone around her was keeping secrets from her – including exactly what she is.

I don’t particularly like Cassandra, the protagonist. She talks like a strong, independent woman and a decent protagonist – but she doesn’t act like one all the time. Part of that is the circumstances she’s in – her whole world has changed, everyone she knew was keeping secrets from her, she’s learned whole new things about her life, her family and even what she is and has had her life threatened on a regular basis. Given the circumstances, it’s reasonable for her to be a bit shocked and lost – so her crying, even fainting, and running around following other people’s plans are not bad things – but because I haven’t seen her in any other context yet, this is what I see. A woman who cries in emotional stress, isn’t very proactive and tends to follow other people’s plans and leads.

Her whole relationship with Hunter is fraught. From the very first moment they met, Hunter was pushy. And that quickly escalated from pushy to outright molestation – repeatedly touching her when she firmly said no. Putting his hand on her thigh, on her bottom, even undressing her when she fainted. He repeatedly forces kisses on her when she says no and in one memorable scene tries to force his tongue in her mouth while she firmly keeps her jaws closed.

And yes, she does say no and she does call him out on it not being ok – but still stays with him and doesn’t once aim a swift kick at the yin-yangs or even a slap across the face. And for every line there is with Cassandra saying “this is so out of line, how dare you” there are 10, 20, more talking about how hot and sexy he is, how his touch sends electricity through her and how amazingly gorgeous, compelling and yummy he is. And, of course, they do end up together and declaring their love for one another (after 3 days of acquaintance. And yes, I really do dislike that trope). This ends up making her protests about him constantly groping her seem less “how dare he, that’s pure arseholery, get me a restraining order and some pepper spray” and more “aha, feisty lady playing hard to get.” It’s another “no means keep pressing until she finally is swayed by your awesome masculinity, you stud you” moment. For that matter, I don’t understand why Cassandra so instantly and repeatedly trusts Hunter, even with her life and the lives of her friends and family.

Inclusion-wise, well we’ve got a lot of straight, white people with nary a token in sight
On the plus side, I am intrigued by this story – by the conflict between Heaven and Hell that doesn’t follow the traditional script. I want to see how the various characters are going to move on from her after the major events of this book. The guardians protecting and saving souls is an interesting concept that I hope see explored. As is the Seekers as their enemies, the conflict of visions and battling not directly so much as through feints – protecting souls, threatening souls rather than outright attacking each other.
I’m curious about the angelic and demonic forces and am surprised to see some of the old staples of angel novels missing (there’s no Gabriel and Michael) managing to evoke the concepts of Heaven and Hell without the religious connotations.  I think this story has immense potential – and while the characters have done a lot to irritate me so far, they haven’t crossed the line to being irredeemable and much of what has happened can be explained by the sheer overwhelming situation they have been placed in.

And while Cassandra isn’t exactly proactive, she does have the strong potential to be. She isn’t accepting the dictates from heaven unquestioningly, she doesn’t bow to her mother’s demands and she is willing to tell Hunter to take a hike, to keep his hands to himself and to stay the hell away from her. She has strength there, even if she doesn’t always use it, and it’s possible that a lot of her passivity in this book is simply down to the sheer overwhelming nature of the revelations thrown at her.  I’m not happy with her relationship with Hunter still, but I not only think that she can become a stronger character than we’ve seen, but I’m also confident that she will become one.

In many ways, I think this book is a prologue. We’ve seen the major players, we’ve seen the world, we’ve seen the major actors and forces. The stage is now set and I want to see how we go from here. I want to see Cassandra grow as a character, see how she takes charge in her world. I want to see what these angels and demons actually mean, what the rules and powers are – and how Cassandra will keep her relationships going. I’m intrigued and eager to see this develop – the flip side is that it does have to develop, if it doesn’t Cassandra is going to annoy me and her relationships are going to get annoying and trope laden.

As a prologue for a series that develops from here? It’s a good book. We have everything laid out clearly, we know the stakes, we know the world and we know the characters – and I think we’re now very aware and informed of each. As a stand alone book, however, I don’t consider it fun and think it has problems. I’ll be looking for the second book to develop my opinions further, in the meantime, I will delicately balance on the fence

Editors Note: A copy of this book was provided for review by the author
Posted by Sparky at 9:00 AM