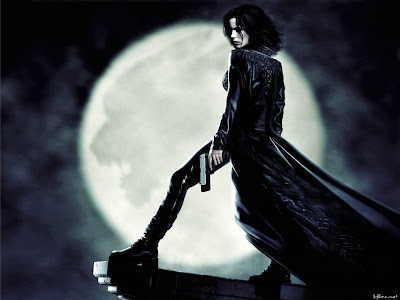 Editors Note:  Underworld Awakening is due out January 20th, and to that end, I thought that everyone could use a refresher on the famous series.  For the next few weeks, Fangs for the Fantasy will be reviewing the Underworld movies in preparation for the next exciting release.
Underworld was released in 2003 and stars Kate Beckinsale, Scott Speedman and Shane Brolly. There is an going war between lycanthropes and vampires.  In order to stay alive, werewolves have evolved to the point were there are not longer subject to the moon.  Selene is a vampire who hunts werewolves, who has been charged with hunting down the lycans, one wolf at a time until their entire race is liberated.

Underworld takes place in a modern setting, and so vampires and lycans carry out their war using glocks loaded with special ammunition.  Special bullets that introduces silver directly the bloodstream of werewolves are created to kill lycans, and vampires are brought to their end via bullets created to introduce UV rays directly to their bloodstream. I suppose this is the closest the writers could come to the original weakness of both supernatural beings in a modern setting.  Considering that Meyer introduced the world to love sick sparkling vampires, this shift is more than acceptable and respectful of the original mythos for both beings.

The film itself is extremely dark and spartan. It moves from one dark rainy night to another with no pause to give the viewer a moment to consider the passage of time. Vampires dress completely in Black leather which by the way is a look that is fantastic on Kate Beckinsale.  The long leather coats is at times reminiscent of The Matrix trilogy, however similarities end there. Vampires cannot fly but they most certainly are extremely agile and capable of jumping from buildings stories high.  The shift from human to werewolf is seamless and I believe the special effects stand up to this day.  There lycans are huge, terrifying and suitably animalistic.

As to be expected, the vampires and lycans are at war.  The story is very convoluted but the jist of it is that lycans used to be the daytime guardians of vampires, which essentially reduced lycans to the position of slaves. Lucian the leader of the lycans was content to be a slave, until Viktor, the vampire lord kills his wife in front of him.  Viktor's greatest fear is a master race - a hybrid of vampire and werewolf that is stronger than both and since Lucian's wife, Viktor's daughter, was pregnant with a child, she simply had to be killed for the safety of the coven.  This was the beginning of a great war between both sides, as well as the start of Lucian's 600 year effort to get justice for his slain wife and child.


It is Selene who discovers the plot and awakens Viktor from his slumber to deal with what she believes is the betrayal of Kraven, and the potential power shift from vampire supremacy to lycan supremacy. Selene is loyal to Viktor because she believes that werewolves killed her family leaving her an orphan.  It was Viktor she believes who scared the werewolves away and protected her from certain death. Unfortunately for Selene, her trust is extremely misplaced.

Beneath all of the waring, there is a budding relationship between Selene and Michael Corvin, the first hybrid to come into existence.  When Selene first sees Michael is a human but even after he is bitten by Lucian and becomes a werewolf she still seeks to protect him.  The two have interesting chemistry; however, neither Michael or Selene's almost instantaneous attraction makes any sense at all.  Their relationship really falls under the category of love at first woo woo.

There is one werewolf of colour and one vampire of colour, and both fulfill the role of servants to the White characters.  We know nothing about them or their feelings on this war and in fact, the only thing that we really know about them at this point is that they are devoted to their masters.  While this is not uncommon in the genre it is extremely frustrating.  These two characters feel as though they were included for the sake of tokenism.  There is absolutely no reason that one of the major roles could not have been played by an actor of colour.   Along with sidekick characters of colour, it is also worth noting that Underworld is a completely heterosexist world as there is not a single GLBT character.

As a protagonist, I really do like Selene.  She is strong, goal orientated and highly capable.  She does not wait to be saved by a man and is always ready to take the initiative to accomplish her goal. Unlike far too many female protagonists in this genre, she is not prone to spunky agency, though I did not always understand the connections that she made.  I think that this was the fault of the writers, who sometimes lost sight of the plot in an effort to turn Underworld into an action packed thriller. At times it felt as though the inclusion of vampires and werewolves was incidental.  These supernatural beings could easily have substituted for waring humans or even humans and aliens, or two alien races.  This may however been an attempt to humanize vampire and werewolves in an attempt to get the viewer to bond with the characters and their struggle.

At it's core, Underworld is an action flick.  Guns are quickly pulled out to deal with any confrontations that occur.  The plot does occasionally get lost in an effort to introduce more gore, and this coupled with the fact that it takes sometime to explain why the vampires and lycans at war in the first place, make the beginning of the movie tedious at times.  Underworld could certainly have been more, but for what it was, it was engaging.