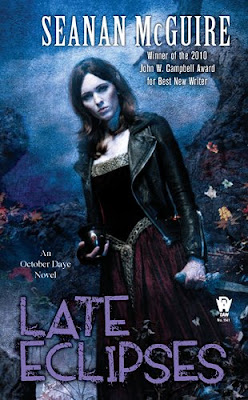 Before the first book, October was turned into a fish for trying to rescue Luna and Rosalyn from the clutches of Simon and Oleander. But now, Oleander is back. A master illusionist and poisoner and a brilliant assassin, she is hunting October and those she loves.
As people she loves and values are brought down, October has to find a cure for the poison and catch Oleander before more people are lost. Or discover whether Orleander actually exists and isn’t just a figment of her own breaking mind?
As if an arch enemy poisoning people weren’t enough, her rival and other enemy, Rosalyn, ends up with unprecedented power in the Shadowed Halls. And the unstable and dangerous Queen of Northern California has her own vendetta against October – and is determined to settle the score. And here are these murders, ideal for framing.
And in the process, October learns far more about Amandine and herself than she ever imagined
As far as mysteries go, it was an odd one. There wasn’t  choice of villains or really choice of methods. From almost the word go we knew it was Oleander, in the Knowe, with the Poison. There’s more detective skill goes into a game of Cluedo than that. However, I don’t think it was a mystery or a detective story per se – though there was a considerable amount of detection involved in finding the exact vector of the poison – so maybe it’s a different kind of detective story.
I think far more it counts as a part action book, part political intrigue. October doesn’t need to find out whodunit so much as howdunnit and how to stab whodunit repeatedly when we have Rosalyn and the Queen on her back and so little of her normal support network. And I liked it. I was curious as to what would happen next, I wanted to see how the political intrigue would developed and I was interested to see how they would actually find their way through the maze and actually resolve everything. I never really knew what was coming next or how the plot would resolve – and it was a fascinating trip to the end as October dodged the obstacles in her way to finally confront the big bad in true heroic fashion.
The world continues to be a fascinating mixture of so many different fae all with their own quirks and abilities and culture. I also love the big revelations we’re getting now – about Amandine and October and the sudden, completely unexpected twist the entire plot has taken
And Danny the taxi driver is fun and awesome and has pet monstrosities. Which sound deadly and cute – and I want one. Quentin, on the other hand, is a character I’ve not sure I like. I don’t find him unlikeable, but nor do I especially see what role he plays in the story.
I was less happy with October’s constant blaming of herself for various things – she does that a lot and it’s unfun. I also think the love triangle between her, Tybalt and Connor is going to vex me – but so far it’s handled well and not distracting to the story yet.
I can actually understand Rosalyn’s jealousy of October, and even her hatred – but I’m also extremely leery of Rosalyn being presented as dangerous and menacing because she is crazy. It’s been there since she first appeared and its only escalated – Rosalyn can’t be dangerous because she hates Toby or is conniving and power hungry or even just a malicious, evil person – no we have to bring out the crazy. This is even worse when we consider that the queen, with her hatred of October is, again, described as unstable and crazy. Even Sylvester is described as unstable and dangerous from grief. Add on that October thinks she’s going insane and killing people and crazy Amandine, the terrible mother – there’s a commonality of mental illness and danger here that I don’t like at all
We have some inclusion – at last! Took us 4 books but we got there. But May (the Fetch) is in a same-sex relationship with a South Asian girlfriend (she appears for like 3 seconds, but she’s there). May didn’t have much role in this book so I’m not going to judge the couple one way or the other. It’s not overly stereotypical but it’s not overly present so there’s not much to say.
While I generally like October as a character, I feel that her constant victimisation and suffering is becoming excessive. She can’t even be thrown in prison; she has to be horrifically tortured. In every book now she’s had to suffer, sometimes extremely. It’s sad further in this case that she had to be rescued. Aside from that, I like her as a strong, capable female character, especially since I don’t think any of the other female characters played any kind of major role (in fact, with Oleander, Lilly, Rosalyn and Luna, I think they were largely victims and villains in this book and the only redeemed villain was a man.) Most of the strong female characters we’ve seen in this series are either absent or incapacitated.
All in all, it’s another good book in an extremely good series. Good pacing, generally good characters and an interesting plot line that never fails to keep me gripped and entertained. There are a couple of elements I’d like to change – more inclusion, less October self-judgement and less October being mangled – but they’re generally overshadowed by what is one of the better series out there. I also can’t wait to see what’s next. Between October’s change in both body and title and the shift in local politics – there’s a lot to come.