Wednesday Reboot: A Haunting in Salem 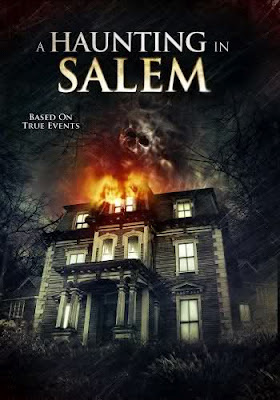 After so many weeks of vampire movies, I thought a little good old fashioned horror might mix things up a bit.  A Haunting in Salem was released in 2011 and stars  Bill Oberst Jr., Courtney Abbiati and Jenna Stone. I peaked at the Amazon reviews before watching it and so I was prepared for it to completely suck.  In the end, I don't think it was a bad movie, but it wasn't great. It was almost as if the director made the film using a checklist to ensure that the expected made it into the movie.
Wayne, a  veteran who is suffering from PTSD moves his family to Salem, after being offered a job as a sheriff. This job comes with the bonus of free lodging.  What he does not know is that every single sheriff who has occupied this home since the Salem witch trials has died in that house.  If you are going to go with the whole haunted house motif, then the house should look legitimately creepy, instead of charming and welcoming.  From the beautiful front porch, to the updated kitchen and gorgeous wood, I kept thinking about how much I would love to visit it.  Perhaps it is because much of the movie is filmed in daylight and that does not exactly help to inspire fear.
Wayne and his daughter Alli are the most effected by the house.  The ghosts uses instant messenger to communicate with Alli, proving that though they died in the late 1600's,  they have stayed updated with the times.  Watching I kept wondering if they had a facebook page, and if they found the 140 character limit on Twitter limiting.  Yes, I'm being an ass, but seriously, we never really find out the purpose behind the instant messages, and they feel like big huge reminders that the family is living in a haunted house, lest the viewer become distracted from this point.
Wayne sees visions of rotted faces, instead of the faces of his family.  This results in two separate occasions of him accidentally hitting his children.  These incidents encourage Carrie, Wayne's wife, to believe that he is having flashbacks that are PTSD related.  When he claims to be fine, she pushes the point because she believes that he is in denial and needs treatment.  Carrie quickly moves from suggesting that Wayne go to the VA hospital to moving out of the house with the kids.
A Haunting in Salem actually has two characters living with a disability.  The other is the gardener/handyman McSwain.  He clearly has some sort of mental disability as well. When he tries to warn the family about the stones, the mayor quickly dismisses him saying, "don't pay any attention to him, he's not the sharpest tool in the shed."  Of course, as it turns out, McSwain was absolutely right about the stones.  He is quickly killed shortly afterwards for accidentally damaging one of the stones.  I didn't expect McSwain to be the star of the story, but to see him so quickly killed after having a character dismiss him, makes him disposable.  When you add this to the fact that he is a disabled man, it is extremely problematic.  I would much rather have had McSwain be able bodied, rather than have become a victim.

A Haunting in Salem movies very quickly is pretty much a paint by numbers kind of horror flick. The creepy music warns you when you are supposed to be scared and there is a sufficient amount of blood and screams.  The acting is extremely wooden and at no time did I actually believe that Wayne and his wife Carrie even remotely liked each other, let alone loved each other.  The stand out in this movie is Allie, played by Jenna Stone.  We watch as she moves from a typical petulant teenager, to a young possessed woman and the transformation while not brilliant certainly catches the viewers attention.
I can't say that I recommend this movie.  I don't even think watching it alone at night would make it suitably scary.  It's enough to pass time without being really interesting or truly dreadful.  If anything I would say that movie reads like a cheap knock off of the Amtyville Horror movie.