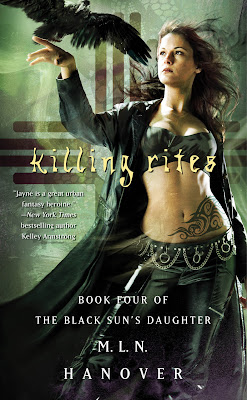 It took three books, but Hanover finally wrote a book that I enjoyed reading. Perhaps it's because Jayné [Gods above how I hate that pretentious faux French name] the protagonist seems to have finally achieved a level of maturity.  After killing an innocent man in Vicious Grace, she is haunted by her actions and questioning whether she is actually in control of her body. Because her powers seem to be increasing, rather than diminishing, Jayné determines that a rider has taken up residence in her body.
Jayné and Ex head to Sante Fe, leaving Chogyi Jake behind to meet Father Chapin and a group of Vatican approved exorcists that Ex was formerly involved in.  Father Chapin immediately suggests that Jayné seek out psychiatric help.  He feels the fact that she had a controlled childhood, inherited a lot of money from her not gay Uncle Eric, lost her faith in God and Eric, as well as defiled the temple of her flesh [note: nice way to call her a whore for having two lovers].  Though slut shaming is disgustingly sexist, I was not surprised to see it in a Catholic priest. Jayné convinces Father Chapin to go through with the exorcism. She learns that her riders name is The Black Sun's Daughter and it seems as though the demon is somehow related to the desert.  At the moment when the rider is just about to be pulled from her body, Jayné feels another trying to slip in and calls a halt to the exorcism.  Father Chapin with Ex's support believes that Jayné has been overcome by the demon living inside her.
The rest of the novel is essential spent with Jayné looking to prove that another demon was indeed trying to take control of her body.  This however does not mean that it was free of problematic elements.  The following a quote from the book regarding Jayné's feelings on going for an exorcism.

The shame pulled my shoulders in, thickened my throat.  All my secrets pressed down on me - I was a killer, I was the puppet of a demon.  I was a stupid little girl playing at games she didn't understand.  If I'd been stripped naked in public, it wouldn't have been worse than this.  I felt like I was going for an abortion [page 83]

I don't agree that Jayné should have felt ashamed simply because she had no control about the demon taking residence in her body.  To liken the exorcism to an abortion - a perfectly legal medical procedure bothered me.  Why should anyone feel shame of a medical procedure?  If anything, this comparison serves to further serves undermine women's bodily integrity. It is one thing for Hanover to use the Father Chapin to assert that Jayné is lacking in morality, and quite another to put that language into Jayné's head.

After three books we finally have our first gay character - Tamblen.  Nope, this is nothing to get excited about because of course Tamblen's homosexuality is a sin which he actively struggles against.  I understand that this is something many gay and lesbian people who are religious must go through, but it is telling that this is the situation that Hanover chose to depict for his first GLBT character.  It is further problematic that Alexander sees Tamblen's homosexuality as a moral failing and a flaw.  This is not even slightly redeemed by Jayné claiming that "Everyones unclean." [pg 189]. She is basically saying hate the sin and love the sinner. What would have been better is if Jayné had altogether declared that nothing was dirty, sinful or problematic about being gay.  Her actions still cast doubt, rather than asserting Tablen's humanity.

What I particularly like is that despite all of the shame heaped upon Jayné for her lagging faith, she stays true to who she is.  Jayné no longer sees the world in simple black and white but understands that there is not only room for grey, but that grey is necessary.  This does not mean that she is not plagued with guilt when she is forced into a situation that goes against her moral beliefs, but that not everything that is necessary labeled as evil is always evil.  This is a sign of Jayné's growing maturity, and I am starting to like her as a person.

As I said at the beginning of this review, I have not really been a fan of this series, but I feel like Hanover while still participating in tropes that are harmful as certainly made a turn with this story. Killing Rites was extremely rich and very well written.  I can honestly say that I look forward to the fifth book in this series.