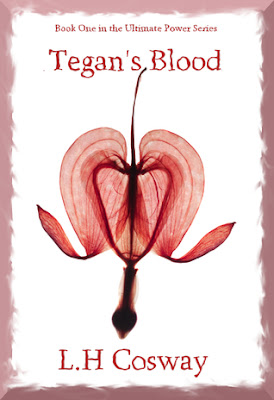 Tegan has just managed to drag herself out of her home, after weeks of her life being on hold in the aftermath of her boyfriend killing himself, leaving her bereft, in pain and grieving, unable to face the world.

Throw in some vampire slayers, a vampire who is all too attracted to Tegan and a returning monster that everyone thought was long since gone and things get very confusing indeed

It is hard to tell a vampire story these days and manage to bring something unique to the tale, indeed a lot of the supernatural worlds has now been heavily covered in many variations. But I’m still surprised at what new angles new authors can bring and this book is definitely one of them. The concept of Tegan being special but without any particular powers is still relatively rare in a genre that has legions of super-powered protagonists. Her power puts her at risk far more than it benefits her.

We have a world that has magic and vampires – and dhampires which could always do more exploration. As well as an interesting take on where the lines are drawn and how the politics lie. It’s also interesting to see vampire Slayers fully integrated into the supernatural world rather than at war with the entirety of it. I also quite like the nuance of the Slayers. We don’t see vampire hunters as evil monsters persecuting the poor misunderstood vampies, but nor do we see them as righteous crusaders battling out to save humanity either – similarly with the vampires. They’re neither poor misunderstood, sad angsty creatures (in fact, there was no vampire angst at all!) but nor are the unabashed monsters. It also seems to have an interesting magic system with actual rituals and rules being carefully planned out rather than just hand-waving, magic words – ta-da shinies!

The different factions in the world are intriguing and, if anything, I’d like to see more of them (and hope to do so) as we see everything from the old families of Warlocks dealing with Rita and the wrangling over the position of vampire governor – to say nothing of the prize that Tegan represents. I look forward to seeing more.

The main problem I have with this book is the character’s decisions. Tegan frequently does things – and trusts people in ways that bemuse me. She’s held against her will at a club to the point where she is crying in fear –but is quite willing to meet her captors the next day. She condemns Ethan for defending himself when attacked by men with very large weapons and regards him as a murderer for that self-defence. Yet she decides to trust – and go home alone with – one of those sword wielding vampire slayers when that is all she knows about him (and all he knows about her is that she’s the pseudo-girlfriend of a vampire). She actually wanders off alone, without telling anyone, with numerous supernatural or just plain dangerous strangers despite having zero reason to trust them

When she arrives at these various destinations, there usually follows a rather long info-dump. Thankfully, the world is interesting enough that the info-dump isn’t painful – I’m actually intrigued by the knowledge we get – but it’s still an info-dump and not an elegant way of presenting the world. Some of the info-dumps are also, well, rather stilted conversations and we even have moments were something is explained to Tegan and she takes time out to review what she’s learned – allowing us to be info-dumped twice. The problem is that the story is rather glued together by these points which ends up with the story on a little shaky ground.

Tegan joins a large list of protagonists with low self-esteem that seems so very common in the genre and it’s never really redeemed or countered. I also dislike how the relationship with Ethan goes from complete stranger (or threat) to true love after almost no interaction at all – there is no reason for Tegan to love this man. At the beginning of the book we learn that Tegan is often attracted to men with possible mental illness issues and the description is rather unpleasant (“damaged guys” and this “I want to fix them” ideal”). Inclusion wise we have 1 lesbian vampire bodyguard (whose androgyny is hammered home excessively) who does 2 things in the book – save Tegan’s life and flirt with her. There’s an implication that Tegan’s friend, Nicky, may be a lesbian, but she spends the entire book serving, helping and looking after Tegan up to and including giving her clothes – then disappears entirely when Tegan no longer needs her. Oh and it’s “unfortunate” that she doesn’t do men. We have some POC but they’re scattered bit characters.

In the end, this book wasn’t one of my favourites. It has an intriguing world and concept that is very appealing, but its execution is clumsy, resting too much on dubious character decisions and long infodumps. However, the powerful setting means I will be sure to pick up the second book. This first book has introduced us well, we know the world, we know the setting, the powers, the players and the way the supernatural world works. That means all of the elements of this story I didn’t find appealing are now unnecessary since they were largely linked to introducing us to everything/everyone – so the next book will probably be a lot better – and I look forward to it.

As a standalone novel, it doesn’t rate highly with me. As the first book of a series – I expect great things to come.