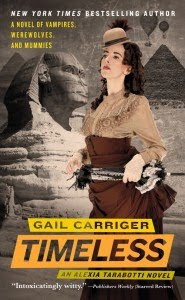 Alexia is settling into her life with her husband Conall and the Infant Inconvenience, Prudence, living alongside and with Lord Akeldama, they have created something resembling a routine. At least so faer as such tempestuous personalities can ever be said to form anything as mundane and peaceful as a routine.
It’s not to last, however, as Lady Kingair, alpha of Conall’s old pack, is in the city looking for her lost beat – in an investigation that won’t just take part in London,  but also in Egypt. Alexia also receives a message from the ancient vampire queen, Matakara who wishes to see Prudence – in Egypt, and it’s a summons she cannot ignore.
Add in the mystery of the godbreaker plague and the fact that Alexia’s father seems to have been involved and there are a whole lot of threads in Egypt to unravel. Which leaves Biffy and Lyall back in London to try and hold the fort – which becomes more difficult as Lyall’s history becomes more widely known.
And it’s nearly impossible to get a decent cup of tea in Egypt. How very vexing.
The story for this book is interesting and curious as there are so many issues working at the same time – the Kingair beta, the godbreaker plague, the machinations of Matakara, Alexia’s father, old secrets coming to light, the management of Prudence – there are many parallel plots but they all come together into one plotline – there are no real side plots, just the main plot approached from several different directions. But what makes this story, like every story in this series, are the characters and the world setting. The characters make this series.
This book, is again, hilariously funny. There are so many times when I laughed out loud – I think the prize goes to Alexia asking Ivy if she can wait to faint and Ivy deciding she could because fainting hatless in a foreign country is just not done. The proper protocol and language of the Victorian era and Victorian society is woven into an array of constant humour. That same language continues to make these books so very evocative of their age.
Alexia’s relationship with Conall – and, indeed, everyone around her – is hilarious. Alexia’s combination of propriety and wilful refusal to accept limits or to do anything that she doesn’t want to do is joyous to behold. Her sparring with her husband, her autocratic demands to
I’m also glad that the eminently practical and stolid Alexia didn’t become a gushing and twee mother. No, while she clearly loves her child, she has no illusions about her Infant Inconvenience nor is she inclined to be sweet and delicate. This isn’t’ some cookie cutter version of fluffy motherhood, this is motherhood, Alexia style with her personality and being very much apparent.
And I love Prudence for being exactly what a daughter of Alexia and Connal would be. A menace, a handful, opinionated and strong willed and wild and determined requiring an entire staff to keep in line. Ivy, also, remains such a perfect character with her ridiculous hats and ridiculous theatre troop and ridiculous mannerisms and general ridiculousness all round. I completely didn’t expect the ending for her but I can see it so perfectly. I think a series of books following Ivy in her new role will be beyond hilarious.

I did expect a lot more problematic elements to the depiction of Egypt and Egyptians. A lot of authors take the excuse of time period to let a whole lot of extreme race fails stream force and respond with “well it is the 1800s” as if it’s sufficient explanation. This was, largely, avoided (though nor was there any real role played by POC either which I had hoped for). There was an element of the foreign land - but it was the description  of a foreign land and not very different from similar descriptions of France and Italy and even Scotland. Ivy certainly let her cluelessness show (though much disdained by Alexia) but in general derogatory comments about local culture, religion or people was surprisingly absent. And this series remains one of the more authentic paranormal steampunks I’ve found – see, it can be done. I’m not saying it’s perfect by any means –but for this genre, it surprised me. What was much more problematic was the comparative lack of any real Egyptian participation – having arrived in Egypt the party has had relatively little to do with actual Egyptians and Egyptian characters, making the whole thing serve more as background than anything.
On the GBLT front, I am happy to see the capability of Biffy, Akeldama and Lyall as well as Biffy’s growing power and capability – but then, their capability had never been in doubt. Biffy’s upcoming role is also refreshing and a pleasant surprise. But we are still bombarded by an endless collection of stereotypes – Akeldama still wafts and minces (yes, literally minces), still uses affected language, ridiculous nicknames and now has full blown “effeminate” features. And he fits as a “mother” and a father to Prudence. We still have the endless fanaticism over clothes and fashion from Biffy and the “dandies” and even Lyall, who, as a bisexual, is allowed to be slightly less stereotypical than the gay men, is still fastidious and appearance conscious compared to the straight werewolves – he’s also duplicitous and manipulative.
Madame Lefoux has her own collection of manly stereotypes though we’re spared seeing things through her eyes and she’s rather eclipsed by the epic mincing of Akeldama. But she also compounds matters by throwing in flirting and advances after Alexia.
I did find Biffy and Lyall’s growing relationship touching and wonderful – but somewhat soured since Alexia almost set it up as a replacement for Biffy’s actual love when his relationship to Akeldama became inconvenient for her. But, despite it being touching and loving and wonderful to see, it can’t last – because Lyall and Biffy are going to be split up. Ah, gay love, constantly sacrificed. I’m sad to say that I predicated this early and I had trouble enjoying what should have been a heartening relationship because there were just so many stereotypes being bandied around.
All in all, I loved this book as much as I have loved the series. Extremely funny, with characters I absolutely adore and a setting that almost transports you back in time then adds original flourishes that are fun and detailed. It’s such a shame that there are problematic elements that really dent my enjoyment of what could be a superlative book.