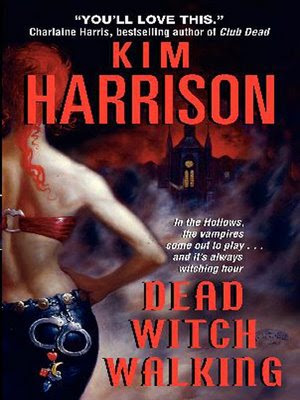 Rachel Morgan is a witch working for the IS, a police organisation that governs the various Inderland races – vampires, witches, weres, leprechauns, pixies, fairies and many many more. It’s a varied and exciting job - usually. But her boss doesn’t like her very much and she keeps getting rather dull assignments. It doesn’t help that her last few have not gone according to plan
And she’s had enough. Now with Ivy, a living vampire and fellow runner and Jenks, a pixie backup, she has quit and is ready to go it alone and start her own firm. Except the IS takes exception to people leaving – especially Ivy leaving – and the goodbye letter comes with a death threat. Now Rachel doesn’t just have to make a living, she has to dodge assassins and pay off her contract before one of them gets lucky
Enter Trent Kalamack. City councillor, millionaire and crime lord – if only she can prove it, it’d definitely get her free and clear.
In between hunting Trent and dodging assassins she also has to deal with the problem of a hungry – and abstinent – vampire house-mate and a demon. More than enough for any witch to deal with.
I think the most impressive thing about The Hollows series in general and this book in particular is the world. There are few worlds that I love as much as the Hollows (I think Ilona Andrews’ is the only series offhand whose world building I love as much) and none that surpass it. With living vampires, dead ones, weres of various stripes, elves, pixies, gargoyles, fairies, the ever after, demons, trolls – and things I can’t even remember but are all connected somehow – this world is incredible
But not just the various creatures (and their cultures and habits) but the history as well. The Angel Virus, the Turn, the consequences for genetic engineering and ongoing nervousness about tomatoes – this world is rich and has been clearly worked on in great great detail. Kim Harrison is one of those authors who makes me think she’s got a huge shelf of world building and plot notes (that I would probably commit several crimes to obtain). In short, I love love love this world and if Kim Harrison does finish this series, I hope it will be to start a dozen more all set in this wonderful world.
Rachel has many qualities I like. She’s tough, she’s brave, she’s fun and she’s fiercely, dramatically, furiously independent. These qualities are, however, linked to more than a little Spunkiness. She’s reckless to a degree that is infuriating. She doesn’t plan nearly enough, she ad libs too much, she sticks to a course of action long after most reasonable people would have written it off. In other words, she’s a fun character but her decision making is so incredibly flawed and frequently annoys me. In general, though, her behaviour feels more like real personality flaws rather than contrived tropes (that doesn’t mean they don’t fit tropes, but it means it feels authentic at least).
Storywise I enjoy it –but I admit I love it more for the world than the story at this point. Rachel is flailing around trying to buy off her IS contract and in doing so shows off all her best and worst qualities. It’s interesting to see the little plots and the twists as she tries to survive the IS and hunt down Trent – but all are interesting more to show off the world, introduce the characters et al more than in and of themselves (did I mention I love the world?) Not that it’s boring – far from it, the action scenes are well written and exciting and never once made me put the book down. But there are large parts of the plot that are caused as much by Rachel’s poor decision making (such as the rat fights) or, worse, random unconnected events (going to the library) that I didn’t like – I liked the scenes, but not how we got to those scenes.
In terms of inclusion Ivy is bisexual which is great to see a regular, major character who is GBLT. But she is far from unproblematic. Ivy is a vampire and her sexuality is dangerous. Her desire is a constant threat to oh-so-straight (and she makes this clear in such abundance I keep waiting for the “not that there’s anything wrong with that” tagline) Rachel. Ivy is always on the edge of breaking and forcing herself on Rachel who is just too much to resist – this trope of menacing gay sexuality is sadly overdone.
In terms of POC we have Keasley, a black neighbour who pops up whenever Rachel needs something. At this stage that’s about it. Now, Ivy is referred to as having a vague slight Asian-like features around her eyes, but it’s from an unknown ancestor and is usually used just to add to her super-sexy exotic appearance.
I love this book, I have always loved this book but I think, perhaps, I love it more for the awesome series it introduces than for it in its own right