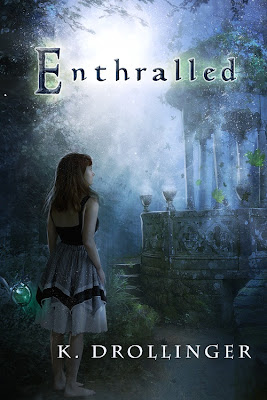 Annette is living a normal life as a vet with her grandfather in a nice town in the Pacific northwest of the US. She has a quiet life, filled with the normal problems of her grandfather’s bereavement, her neighbours and her work. At least, she would have if it weren’t for the disturbing dreams she has – the dreams of women being murdered long in the past.

Until in comes Phyllis, a highly eccentric woman claiming to be psychic and talking to animals – including an injured wild opossum she insists on adopting. Phyllis is on her way to a job – to find hidden treasure in an old manor house in the middle of nowhere in a gated estate. And she has pictures of the woman from Annette’s dream

Annette is uprooted following the image of this strange woman and trying to find her ghost. But upon arrival she learns far more than she imagined – and that there are far more terrifying and powerful creatures that ghosts lurking in the world. But when in an isolated home in the middle of a storm and people start disappearing, you have to learn to adapt quickly; especially when your life is on the line.

The concept of this book was interesting, we have several qualities here I love. We have a diverse and rich supernatural world, we have different kinds of supernatural creatures. I also think that the creatures in question – especially the fae and the vampire but even the werewolves, go back more to the original core of their myths rather than more recent urban fantasy tropes. I appreciate the revisiting of the classics with a new twist on them. I also like that the main character is a medium, it’s also not something that is commonly done and presents with a whole new set of ideas and potentials.

And having several strangers go to a house with dark and hidden intent and then face a life threatening mystery is an old theme – but it’s a goody and has a great deal of potential when it comes to tension, grand revelations, trust and isolation.

But the execution wasn’t something I enjoyed for several reasons.

The writing style struck me as clumsy. It was over-written for one. It was wordy, over-described and had an excessive use of Annette’s full name when “she” would have been more than sufficient. I also don’t think the word “say” was used once in the book. There was plenty of sneering and shouting and screaming and yelling and even bubbling, but no-one actually said anything. Apart from being jarring and clumsy, it meant no-one actually had a conversation – and there was an impression that they all flew off the handle into massive rages at the slightest thing since they started shouting and screaming almost instantly. For some reason they also stop using contractions randomly as well, and the conversations themselves suffer from too many words – it’s like people pause to tell mini speeches to each other. Unfortunately there’s such a lot of conversation in the book that all of this combines to not be a hurdle I have to jump to enjoy the book so much as a massive barricade to scale – a barricade manned by rabid, gun toting militiamen at that.

I think there’s also some confusion as the meanings of certain words. What jumps out at me the most is the word “leer” that is used with extreme frequency (even if it were used correctly, I’d still be suggesting a thesaurus) but the author seems to think is synonymous with “glare”. It’s jarring to find all these arguing, angry people leering at each other.

Now the over-writing can create some very clear scenes – particularly we got to learn a lot about Annette’s life in the first part of the book – it was a very nice picture of how she lives, her family, her home etc. And then it was all rendered utterly irrelevant because she leaves it all behind for the rest of the book. Her grandfather and his grief and her life as a vet and her home town and her neighbours – it all goes away and never ever becomes relevant again. Which is a shame because we spend the best part of 30-40% of the book establishing all this. We have this very detailed, very well described and portrayed setting that we don’t actually use. It’s like going to the theatre and watch them painstakingly and carefully put together a magnificent backdrop, an amazing scene and line up all these great props – then go next door to actually act it. I think this is especially a problem because the spooky, haunted mansion with its secret passages, flickering lights all to the backdrop of a huge storm and dark, scary woods ISN’T described in such evocative detail. And all that potential tension etc etc of the setting? Just isn’t there.

Which is another issue I have, and I admit this is a personal preference thing, but I love speculative fiction because I love the fantastic. This book spends a long long long time getting to the fantastic. Another problem is the link to the fantastic – and the whole foundation of the story, just strikes me as convoluted to the point of unrealistic. Annette is here, living her life when she runs into a woman she takes an instant (and reasonable) dislike to. After seeing a photograph in the Phyllis’s possession of a woman she dreamed about being murdered she decides to suddenly go with this stranger, at short notice, to a house she knows nothing about, owned by a man she doesn’t know for several days. I think even the most impulsive of people would raise an eyebrow.

And I don’t like Annette. I think she’s rather condescending to the people around her; she’s often emotional for no good reason or emotional to an extent that is disproportionate to the stimulus. Her motivations are, frankly, bemusing to me – I have no idea why she does half the things she does – and more than a few of those things are more than a little Spunky (like wandering off on her own, at night. And even going to the house in the first place). She also has a tragic childhood dropped in somewhat randomly towards the end of the book which seems to serve no purpose at all except to just be there.

There is one brief cameo from an Asian vet in the prelude but that’s it for any kind of racial inclusion. There’s no GBLT inclusion. I also don’t like the women in this book – Annette and her spunkiness I’ve already described – but we also have Nellie who is fiercely slut shamed, the oh-so-innocent victim Mary and Phyllis, a figure of constant ridicule.

All in all – the basis of this book, the several supernatural beings all unknowingly being brought together, the diversity of the world, the interesting concepts (especially the fae and seeming to get back to the root of the vampire story and the main character being, apparently, a medium) are all extremely intriguing concepts and there was a real potential for this story to be an excellent one. And I still have some hope for this world setting because it does have this potential. But the execution – the writing, characters and the story presented – all fall well short of being enjoyable for me and it makes me leery of checking the next book in the series. I probably will because I do want to know where it goes, but I’m afraid I have low expectations. Ultimately, I’m sorry to say, I wasn’t Enthralled at all.

Editors Note: A copy of this book was provided for review by the author
Posted by Sparky at 3:00 PM