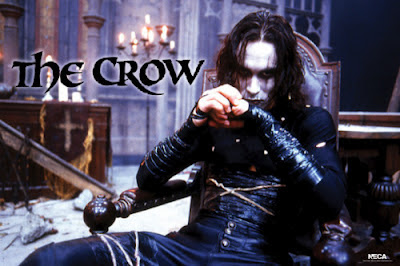 The Crow was released in 1994 and stars Brandon Lee, Michael Wincott and Rochelle Davis.  Eric Draven and Shelley Webster are murdered when on the night before Halloween, because they attempted to fight an addiction.  Draven is beaten and thrown from a building and Shelley is raped.  Sarah is a neighborhood girl and friend to the couple who is the only one who really cares. Sergeant Albrecht is the cop who investigates the murder of Draven and Wincott but gets nowhere.

A year after their deaths, Draven rises from the dead with the help of a crow, determined to get justice for himself and his slain fiancee.  He begins by killing Tin Tin a man famous for the pain he causes with knives.  The crow leads him one by one to the men that are responsible, including the pawn shop owner who bought Shelley's engagement ring. Draven is able to give these criminals a dose of their own medicine because the crow had made him impervious to harm.  I suppose, the crow taught him how to fight as well, as prior to being resurrected, Draven was a guitarist in a rock band.

There isn't a single daylight scene in the entire film and much of the time it is raining.  I suppose this was meant to give it a dark feeling but much of the time it felt like a cheap Gotham city rip off with less theatrics. The dialogue is highly predictable and much of Draven's attempts to be philosophical and poetic simply fall flat.

Women in The Crow fall into the drug addict who needs saving, the spunky street wise kid, the mystical dragon lady and of course Shelley the murdered rape victim.  I am going to start with Shelley because we hear the most about her but only see in her in flashbacks until the very end of the film.  We are repeatedly told about the fact that she is raped and suffered for thirty hours until she succumbed to her injuries.  She exists solely to be a victim until Draven can find justice for her by killing her murderers. I guess it would have been too much to have a woman seek her own justice right?  Better to play up the innocent victim.


Darla is Sarah's mother and she is a drug addict.  This means that Sarah is largely on her own because her mother is more interested in getting high than mothering.  To feed her habit, Darla sleeps with the men responsible for Draven and Shelly's murder. Darla decides to be a real mother to Sarah after she is confronted by Draven who tells her that she needs to take care of Sarah and that mother actually means God.  The next morning she gets up and starts frying eggs for Sarah, who is sarcastic and mistrustful at first but quickly decides to take a leap of faith.  Wow, all you need to do is cure addiction is to have someone tell you that drugs are bad.  To watch these kinds of movies, one needs to suspend belief but this is ridiculous and offensive to those who are in recovery.  If addiction were that easy to kick, there wouldn't be anyone needing treatment today.

Myca is the consort of Grange - the head thug so to speak.  She spends most of the movie sprawled on furniture wearing lingerie.  She performs some kind of mystical function with the eyeballs of Grange's victims.  What makes her indispensable is the fact that she is able to figure out that Draven gets his power from the crow that follows him everywhere.  She instructs Grange to kill the crow to take Draven's power.  Myca dies when she attempts to capture the crow, who pecks her eyes out. Myca exists solely to be magical sexual temptation. Myca is beyond redemption and is further problematized by the fact that the good representations of womanhood in The Crow are all White.

Sergeant Albrecht is the cop who investigated the murder of Draven and Shelley.  After some very quick investigation he quickly comes to believe that Draven has risen from the dead.  Though at first he says that no one deserves to die in the manner of Tin Tin, he is quick to help Draven on his mission, and this includes helping him evade the police, not revealing his identity as well as showing up to be Draven's backup in the anticlimactic scene in which Draven kills Grange.  His role is essentially servile.  The only thing we learn about him is that he is divorced.  He does however get the benefit of Draven's paternalistic lecturing.

Unlike many movies in this genre, the protagonist is actually a bi-racial man of colour.  Draven is one of the few examples of a person of colour as the chosen one.  It is worth mentioning however that he is not the hero that saves the day in the classic sense that we have become accustomed to seeing with White protagonists, he is sort of an anti hero because his motivation his revenge.  He was not specially selected to save the day like Neo from the Matrix for example.

The Crow has few redeemable moments.  With the exception of Sarah, it is very difficult to identify with the characters.  Having Shelley exist as the perpetual victim while Myca exists as the irredeemable magical Asian shows absolutely no investment in the female characters in the film.  Many of the problems with The Crow are typical for this genre; however, The Crow doesn't even have a compelling plot.  I feel sorry for those who paid to see this in the theater in 1994 because The Crow isn't even worth watching on Netflix.