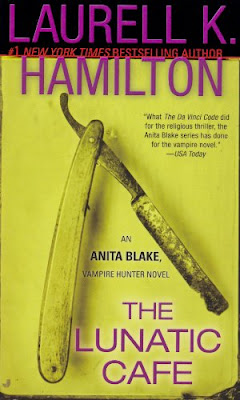 Anita Blake has a new case brought to her through several angles – shapeshifters are going missing, disappearing without a trace. And when you’re a person who can change into a vicious predator with a grip that can rip a person in half, it’s difficult it disappear without a trace.

The police also have a man, a human, who has been savaged by a massive, wild animal with human intelligence. Unfortunately the shapeshifters and police aren’t sharing information, leaving Anita to work both sides as best she can

But there’s also Anita’s love life. Her relationship with Richard has depend but she has her own doubts about settling down – and, the more she learns about lycanthropes, even more doubts about being with Richard at all. And that’s without the complication of Jean-Claude, master vampire of the city who is determined to win Anita’s affections one way or the other; Gretchen, a vicious vampire who is besotted with Jean-Claude and determined to remove the competition and, of course, Marcus – Richard’s packleader who would love to see his second in command dead

I love how the story works in this book. We think it’s answered – but no, there’s more! And there’s more! Ok maybe 3 is a bit of a stretch for coincidence, but I like that there isn’t just one pat answer. That just because you’re working on one dramatic mystery doesn’t mean that the whole world will now centre on that mystery to the exclusion of everything else and not everything has a single, simple, clean answer.

And, again, it’s paced well – with enough twists and revelations to keep things interesting without it being convoluted. We have side-plots but they all come elegantly together. We also, unfortunately, have the Gretchen storyline that adds nothing – I think it’s a clumsy insert to drag Jean-Claude into the story somehow rather than serving any story purpose. Still, despite that the story flows, is never boring, is coherent and keeps you reading without pause.

I love the world still and there’s some wonderful development into the nature of shapeshifters and shape shifting – the many methods and what each means. We continue to have suggestions of supernatural creatures from around the world, from every culture and every mythology, albeit we still have a western focus on the dominant characters. In all it’s broad and it’s exciting.

I’m increasingly clinging to Ronnie as a character in these books because Anita is surrounded by a lot of men. Lots and lots of men. Lots and lots and lots of men. Other than Ronnie and bit parts, the only other women we saw in this book were Raina (evil and tangentially attached to Anita’s man) and Gretchen (unstable and jealous of Anita’s man). Admittedly part of this stems from already having read the series and knowing what’s coming so I can see the early pattern emerging - but here is the foreshadowing of the future women of Anita Blake’s world.

Now I normally dislike love triangles – and I really really dislike any storyline that has a love interest ignore a “no” and continue pushing – so both Gretchen on Jean-Claude and Jean-Claude on Anita both annoy me a lot. What I do like, though, is Anita’s internal monologue which adds a new dimension – her thoughts on what she considers human and dateable – on how she let Richard in only when she knew he was human and never even considered Jean-Claude because he was a vampire, her admission that she does love him, her consideration of types of love are all great reads

Of course this doesn’t excuse the pushiness since Jean-Claude isn’t privy to Anita’s internal monologue.

In fact, Anita’s development as a character throughout this book is something I enjoy a lot. Her doubts about Richard not only related to him being a werewolf, but also the very idea that she would fit into a blissful married life. Her rejection of constantly having to look nice for him, her resentment of her space being violated, her dislike of her choices – and willingness to risk herself – being questioned and her general discomfort of her life having to open up to include another person are all well presented. Too often in Urban Fantasy (and most certainly Paranormal Romance) the couple meets (usually after knowing each other for, say, 3 days) falls madly in love and lives happily ever after. To see Anita say that she loves him but still be discomforted by him cooking in her kitchen, being in her apartment when she just wants to be left alone is a wonderful subversion of the constant “true love cures all ills.”

Similarly I also like watching the beginnings of her moral ambiguity. In this book we take another step to Anita becoming more and more willing to kill. First there’s her willingness to kill in self-defence – no hesitation, no backing down, no finding another way out – a quick, clean willingness to shoot and kill and lose no sleep over it and then considering what that means and how Richard views her. That’s followed by her killing another man – a human – without any remorse, without self-defence but out of vengeance for his victims. Again we see Richard’s judgement and Anita’s developing thoughts.

Inclusion-wise, other than Anita we have some token POC but not in any great numbers again. We do have an overtly racist policeman who is presented as every bit as vile as he should be – and gets some nice consequences.

All in all, the series continues to fascinate me and, looking back, continues to make me nostalgic for what they were – interesting, exciting, with nice plot lines, fun characters and a broad, excellent world.