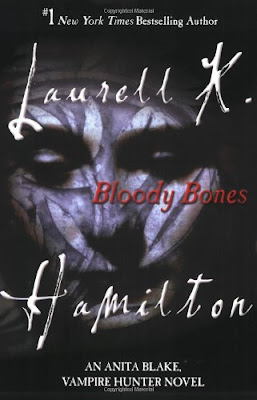 Anita Blake has been called out to an animating job in Branson, far away from her usual connections. But she’s the only one in the country who may be able to do it – raise an entire graveyard full of 200 year old bodies, preferably in one night.

As if that weren’t a big enough problem, the motivations of the parties involved is far from clear – and the presence of fae magic in the graveyard, and faeries willing to guard it, raises many more questions.

And there are vampires running amok – as the neighbourhood vampire expert, Anita is called in but the local police are far from welcoming. The resulting lack of communication is beyond difficult when there seems to be 2 separate vampire killers.

Negotiating with the local vampires, of course, requires getting further involved with Jean-Claude and he never keeps anything simple

Like in previous books, this has several storylines intertwined – but also like the previous books, they all come together. From her original job to raise the graveyard, to the vampire death, to the serial killer all three plot lines are paced really well. If I had a slight criticism, it would be that her job to raise the zombies was put too far on the backburner. It was her actual reason for being in Branson in the first place and it seemed extremely low in her priority list. I can understand that since she was dealing with serial killer cases, but I’d have least expected Sterling or someone to ask where she was and what she was actually doing while they were paying her to complete a time sensitive project. Still, it was understandable given the circumstances and doesn’t bog down the story. I really like how all three storylines come together, how they’re all linked and make up important aspects of the whole – and can all be handled in one big finale that doesn’t feel contrived.

Having read both the books before and the books after this one, I’m left with the feeling that this book is vaguely filler. Because they’re pulled out of St. Louis we’re not advancing a lot of the plot or relationships. And the creatures in this book are fae. Now, don’t get me wrong, I like fae in a book, they’re some of my favourite supernatural beings. But the fae here appear briefly, with precious little foreshadowing or depth, do some shiny stuff then disappear again, never to be heard of again. Short of giving Anita an extra-special shiny vampire to kill, I’m not sure what the point of the fae even were – and a powerful master vampire could probably have filled Xavier’s spot just as well. Because of that, I don’t think this book added anything to the world building – while technically introducing whole new creatures, it just doesn’t fit the overall theme and shape of the series.

We had some development of her relationship with Jean-Claude, but it was mainly her letting him closer to her more than anything. Still there’s closer connections and we also see some more fleshing out of Jason as he grows further into the full character he will become. But largely that’s all it is, we don’t get especially new insights into either characters and they’re mainly around more to show that, yeah, they’re around more.

I’m still all kinds of uncomfortable with how the relationship between Jean-Claude and Anita began. He constantly ignores her “no” and keeps pushing. Then she forces her to date him by threatening Richard’s life (because she has to give him a fair chance to seduce him? Why does she?) and then we continue with the constant boundary pushing regardless

Finally, there’s an ongoing issue with how Anita relates to other women. Other than villains and victims, Anita deals with 2 women in this book – Dorcas Bouvier and Sergeant Freemont. And in both cases Anita strikes sparks. It’s like strong willed, independent women have territories that need to be defended against other women like them. She had a similar worry in Lunatic Café when she saw Deputy Holmes – she could be a friend or, equally as much, they’d hate each other and this is before she even spoke.

Both women were also aggressive and hostile for little reason – or they overreacted in an aggressive manner with little provocation in a way that made Anita seem almost clam. It’s a strong case of Keillie Independence.

That being said, Anita does include some strong commentary on gender in made dominated professions and what is expected of a woman to be viewed as “good as” the men. She often makes minor comments, quick asides, that display how women are treated differently in society and it’s really well done.

On the positive, and as with her previous books, I love the writing style. It is overwritten, it is very descriptive and sometimes it does go extremely over the top. But the story is well paced, the action and investigation doesn’t stop and the over-writing adds more background feel and theme to the story more than actually bogging it down. There are moments when it gets over the top, the description is too much (usually hot men are involved) but otherwise it’s amazingly thematic and helps provider a lot of background, tension and atmosphere. This is really hard to do, and I’m extremely sensitive to books that waffle and ramble, so to have a book that is this descriptive and this

Other than a few of the bit part vampires and Anita herself, there was even less racial inclusion in this book than we normally see in the series. Anita is, as ever, determined not to be controlled or dictated to – but at times it reaches the point of silliness and Keillie independence. She has a work appointment for a flight, it’s reasonable to expect her to be on time. She entered conversation with Sterling guns blazing. She not only reacts to the slightest provocation but, on occasion, her reaction seems just excessive. There’s a difference between a strong character who won’t take shit from anyone, and a character everyone has to tip-toe around because the slightest thing will cause her to blow up.

Still, except for the odd flare ups, it’s generally nice to see that Anita will not compromise herself. No matter who she is talking to or what the situation, Anita will not be talked down to, will not be considered less and she will be respected. There are moments when she can restrain her instinctive flare of anger (such as when interviewing the Quinlans) but she also points out what is wrong and how it sets her teeth on edge in the internal monologue – which I like because, even if it’s just internally, she doesn’t let it pass.

All in all, while I enjoyed the book, I don’t think it added a great deal to the overall series. It was enjoyable, but it wasn’t even a day-in-the-life of Anita Blake (which would be interesting to see). It wasn’t development – it felt like intermission, with extra shiny things added for no particular reason.