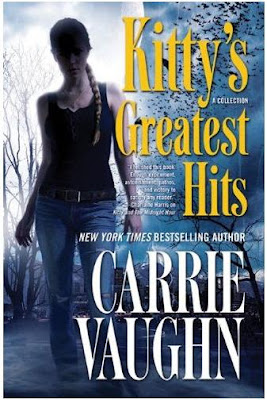 We follow a series of short stories to catch up on various parts of Carrie Vaughn’s world here.

From ancient vampires in the court of Henry VII, as well as the parable of Daniel, through to Rick, the current master vampire of Denver’s long history both in the time of Coronado as well as his brushes with past attempts by the US government to study supernatural beings.

Kitty, of course, has an outing and we get to see how she dealt in all her solo time away from the pack and we fill in some much needed information about TJ

The star of the book, we get to see both Ben and Connor growing up, Connor as a monster hunter and, of course, his time in prison meeting Amelia and what that entailed.

This is a book that collects several of Carrie Vaughn’s short stories that have appeared in various anthologies. I’ve said before that I don’t like short stories and I include that as a caveat here – look at my rating from the understanding this isn’t my preferred style of writing.

The main problem I had with all of these stories is that there was an awful lot of naval gazing. Lots of angsting, lots of monologuing, lots of sitting around rambling about their feelings. Now this isn’t something I’m a fan of at the best of time since it tends to be a whole lot of telling not showing and the length of angst just serves to either make it feel fake or make me wish one of the side characters would give them a swift kick and tell them to snap out of it. But it’s worse in a short story context because we have a big chunk of angst, then when it’s resolved we move on to a new chunk of angst from a different person/situation.

Another issue I had is that many of these short stories radically expanded the world. We had stories where brand new creatures are introduced and they’re background mentions. I’m sat reading it thinking “no no, stop – you can’t just introduce unicorns and merfolk and skip ahead! Back to the unicorns, someone explain the unicorn to me!” I found it kind of frustrating that we’re not looking at the unicorn instead we’re going to tell a love story (one that didn’t end Happily Ever After – which was certainly unique and new).

There were also several stories in this book that I didn’t particularly enjoy – I don’t think they added a great deal, especially Catherine of Aragon, the Daniel parable and Rick’s back stories. They were moderately interesting in their own right but didn’t add a great deal to the overall ongoing meta, they just weren’t relevant enough to what was happening in the 9 book series for me to be very engaged by them. I also didn’t particularly like that we were looking at Rick’s story in colonial Central America but the only glance we have at the native population is as victims Rick heroically saved. The other books with Kitty and Emma were decent enough stories but didn't really grab me.

One story I am mixed on is TJ’s story. In many ways this was sorely needed – the treatment of TJ in the first book was awful and to update his non-existent back story they added that he had AIDS. Danger, danger, this character is drowning in damaging tropes and causing me to start drinking early.

So more history for TJ wasn’t so much wanted as rather desperately needed – and his turning into a werewolf, his first pack and his interests as a biker were perfect to plug some of the holes. Him turning into a werewolf because he had AIDS after being so reckless with lots of unprotected promiscuous sex while at the same time being alone not so much. Still it was a step up – admittedly the only way was up, but it was a step up. Unfortunately, Carrie Vaughn's notes on this story in the back of the book are pretty appalling, I'm afraid.

Some of the short stories, though, filled in a lot of back story that I really wanted to see – especially with Connor and Ben growing up. It was a great insight into both characters but especially into seeing Connor, where he came from and what he did as well as the analysis of how hunting the monsters is no simple thing – and that making sure the monsters are truly monstrous is important. I think we also got to see how his viewpoint evolved on that score, probably more so than his father’s before him. I love to see that, that there was some development in how he regarded hunting werewolves and vampires – it wasn’t just “I kill the monsters – oh wait, Kitty is nice! I will totally change my mind now!” We had a development, a thought process that he went through after numerous experiences

And the star of this book was Connor and Amelia. Since the merging of these 2 happened off camera I’ve been dying to know exactly what happened, how and what that exactly means. We still don’t know the full scope of Connor/Amelia’s powers but we have a much better idea of them, their origins and what exactly they are. This was a perfect addition and could probably have been a book in its own right – but for me this and Ben and Connor’s past really made this book more so than anything else.

I also liked some of the elements of Il Est Né since it introduced exactly what Kitty meant when she talked about a werewolf completely losing himself to the wolf. But it was all a little twee for my taste (though a Christmas story with a serial killer does dial down the tweeness a little).

All in all, this book is worth reading to fill in some of the gaps, put the back story on a little bit of a stronger foundation and add a little depth to the world.  I don’t like all the stories and, as I said and feel I must repeat for fairness sake, short stories much either but this added something to the overall meta, to the world and to the characters in many cases. I'm giving this 3 fangs after a lot of thought - there are some really good stories in this book - especially Cormac and Ben, but most of the stories I found rather dull. Ben and Cormac dragged it up to 3.