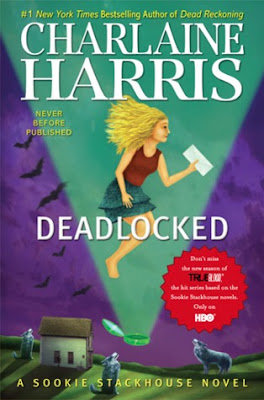 Felipe, King of Nevada, Arkansas and Louisiana is in town searching for answers over who killed Victor. Hosting a king is never easy – but is far harder when Eric and Sookie are trying to hide that they are responsible for Victor’s death.

And then a woman visiting the party turns out to have been bait for Eric – aimed at him and primed with fairy blood to be irresistible. Eric, with help from Sookie, resists – but she’s then found murdered outside the house and the police have been called.

As if that weren’t enough of a problem, Sookie is plagued by the deterioration of her relationship with Eric, especially since Freyda, the Vampire Queen of Oklahoma is in town. Ambitious, talented and beautiful, Eric’s sire made a contract with her for Eric as her consort and that contract is still binding in the Vampire world.

And then there are the fae – with great-grandfather Niall visiting and revealing that there has been a long term, devious plot against Dermot and possible Niall himself. And while Claude and he investigate it, the fae at Hooligans are getting restless

Where was the plot? Where? We had an event at the beginning of the book and then the rest of the plot was jammed in the last few chapters at the very end. In between we had a whole lot of nothing. The daily life of Sookie filled in with lots and lots of moping and angst (which I will return to, oh yes I will)

Now this is something that this series does a lot. We get a lot of insight into Sookie’s life, the people around her, their lives etc – and it’s not normally a bad thing. It gives us a sense of the community and the local culture. The people of Bon Temps are people who live in each other’s pockets, they know each other’s business, they care about it, they have friends and neighbours and everyone is involved in everyone’s lives. So this constant minutiae of life in Bon Temps really establishes this and is a useful story tool – but only WHEN there is a story in the foreground. It makes good background colour, but you can’t have a background without a foreground to focus on. Without a foreground story, the daily life of Sookie is just incredibly boring.

I don’t particularly want to know about Tara’s marital difficulties or her children or Kennedy’s boyfriend trouble or Jason wanting a Sweet Potato Pie or his marital issues. I don’t care that Sookie has met Maxine Fortenbury at the library, I don’t care that she’s going to the local Piggy Wiggly rather than Wal Mart or that Terry Bellefleur has met a woman who likes breading Chata-whatever dogs or that Halleigh Bellefleur is pregnant and has put cinnamon in Caroline Bellefleur’s legendary cake recipe

There were a lot of events that not only were dull minutiae that I didn’t care about – but they didn’t do anything to the story. Why did Quinn call except to make it clear that every last man who has ever been with Sookie is now miserable without her (no, really, every last one. Alcide, Bill, Eric, Sam, Quinn – they’re all pining for the Sookie. Any man who goes near her is forever addicted to the Sookeh!). That phone call served no purpose whatsoever. Sookie going to make a will – purpose in the story? None. Her antique’s dealer demanding the Cluviel Dor? Story purpose? None! They didn’t even add to the background of pointless gossip. Someone please shoot Sookie with Chekhov’s Gun and put her out of my misery, please!

In fact, the whole storyline – which looked like it was going to be a dominant storyline – of Felipe showing up seemed to just fizzle pointlessly. And what was the point of that wrestler again?

And, I’m going to have to say it, Sookie is a really unpleasant person. That sounds awfully harsh but I found it hard to read this book because I really dislike this character. First of all, she can’t be happy for anyone. Someone’s pregnant? She laments about her own empty womb. Brother getting married? Shame it’s not a church wedding.  And she’s thinks things that make no sense and actually feel really bitter and even malicious. She decides to “tactfully” not mention that Mustapha has changed his name – why is that tact? Why WOULD you mention that except to hurt Mustapha? She constantly second guesses people’s decisions – like Jason’s wedding plans (which sounded great to me). She was feeling grumpy about everyone being pregnant but her until she found someone who was miserable in their pregnancy. The way she thinks about people is, to say the least, extraordinarily uncharitable.There’s a line in the book where Freyda says:

And let’s look at Sookie’s relationship with Eric. She’s furious with Eric because he fed off another woman – which she knows happens and knows needs to happen. Even Pam says her objection must be one of timing, not activity. She then finds that the woman was using fairy and were blood to make her irresistible – but she still is angry with Eric. Later she hangs up on Eric twice and when he says he’s coming round to see her she tells him no. But then says she has barely had a conversation with him and not seen him! Well, yeah – you told him not to!

Eric is caught in a severe situation with his sire’s deal with Freyda and Sookie has no sympathy at all for him even though she has, quite literally, a magical “let’s fix everything” button to push that would solve it. She blames Eric entirely for his situation, doesn’t even try to understand it and insists that, rather than press said magic button, he outrage vampire society, give up everything he has spent centuries building and even then face consequences she doesn’t even understand.

But this is because Eric doesn’t love her? She who won’t talk to him, demands he stay away from her and won’t use her magic button to help preserve their love?

Now let’s look at Sookie’s endless moping. At one point in this book Sookie mentions that her definition of a pleasant day is when nothing bad happens because she’s given up on good things. Uh-huh. This is a woman with many good friends, an active social life, a lover who loves her, is extremely good looking and skilled in bed. She has a job she enjoys with a boss she likes and she’s now part owner of the business. She has family who loves her and cares about her. She’s financially stable and she even has a super power. But she’s having a pity party? And it’s not just pity parties – it felt like more than a quarter of this book revolved around Sookie feeling sorry for herself for no good reason and worrying about things that had nothing to do with her (the fae at Hooligans? Them hunting? Why is this her problem?) The latter is ironic because while she’s worrying about the fae (which doesn’t concern her) she barely spares a thought for the murder investigation she’s actually involved in and even withholds evidence from Eric about Mustapha coming to visit her out of spite.

So, I spent the vast majority of this book being bored rigid and hating the protagonist. That’s not good. Even Pam had her brief scenes rolled flat.

Now for some inclusion. We have a gay villain, and a background lesbian who can’t find love. Some hints about Mustapha but it’s not followed up and it’s only hope that suggests there’s more than platonic feeling there. Mustapha is, of course, an ex-criminal who is ashamed (pretty much all we know about him) and then we have the names. Whether it’s Kenya and India’s parents who name kids after the Atlas or Mustapha – who she assumes is the descendent of a black vampire because they have, I kid you not, similar FIRST NAMES. KeShawn and the centuries old vampire Ra Shawn must be related, right?

Frankly, this series feels tired. We have some (rather clumsy) tying up of storylines such as the fae, the Cluviel Dor and Sookie’s final love interest is pretty much set in stone now (that poor poor man). But that’s what this book felt like – a way to tie up the storylines with a lot of manufactured angst to drive that with no real storyline. I’ll be honest, if this book hadn’t been our podcast’s book of the week and I hadn’t read the previous 11 books in the series, I may have DNFed this book. It was dull and, worse, it was annoying and the only thing I feel for the protagonist is irritation.