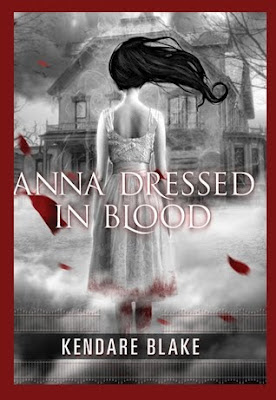 I must admit that I was drawn to this book because of the name, title and absolutely gorgeous cover. Normally I am not one to get sucked in because this is purely marketing but Blake got me.

Often our parents life experiences influence us and that is most certainly the case with Cas.  For generations his family has hunted and killed murderous ghosts.  When Cas is only seven years old his father is killed and eaten by a ghost he was attempting to kill.  All that is left behind is a burned black voodoo cross and a knife.  He is actively discouraged to leave the voodoo the charm alone but as Cas grows he never forgets it, or his promise to go back one day and avenge his fathers death.

When he hears the story of Anna dressed in blood - a female ghost that has been murdering people, Cas feels some sort of connection and is drawn to seek her out. He believes that this kill will be like all of the others.  First he talks to the local teenagers to find out the myth behind Anna but when he finally confronts her, he finds a ghost that is stronger than any he has ever met before.  For some reason, Cas does not want to kill her though she is responsible for so many murders, including that of a local jock.  When in the course of a spell they discover that Anna was killed by her mother and step father, Cas frees her spirit.  It is only when a body turns up the next day that Cas begins to worry that this decision might not have been the right one. Has he freed Anna to have access to more victims, or has something more dangerous come to town?

I found this book to be a slow read despite the fact that it's just over 200 pages long.  At times it felt like the characters were moving in circles.  I further found the romance between Cas and Anna to be awkward.  Yes over fifty years ago, Anna was a legitimate victim, but what about all of the people she has killed since then?  I don't buy her redemption for just one moment.

Anna Dressed in Blood is essentially a story about ghosts and magic.  What irked me again was the negative painting of Voodoo.  It was ultimately Voodoo that was painted as animalistic and violent even as we are continually reminded of the supposed purity of Anna dressed in the white dress she died in dripping in blood.  Being White and female of course she had to be redeemed but the Obeahman most certainly could not be because he practiced the so-called dark arts.

This is a trope that has been repeated time and time again and it is never any less problematic. The message inherent in this horror trope is that the traditional spirituality of brown folks is evil and frightening. For instance, thanks in part to racist Hollywood depictions of the faiths, Voodoo and Santeria are often used as devices to conjure up all kinds of nasty images. (source)

In this case there can be no doubt that Blake's depiction is racially problematic.  It is further compounded upon by the fact that the only character of colour in the book is the Obeahman and he is of course evil.  How can you have a murderesses of countless people be cast as innocent because she is White and female and at the same time castigate the man of colour for performing the exact same acts?

As a protagonist Cas is a bit of an emo prince.  He struggles stay unaffected and is upset as his circle gets wider.  Though he needs help he resents their interference and continually seems to feel the need to establish himself as the dominant one - the expert.

As I mentioned above, Anna is the ultimate reclaimed victim. She is purified of her bad acts by Cas' love.  In the end she saves him but this does not make up for the construction of her character.  Cas' mother is also very weak though she is completely self supporting.  She seems to follow Cas' lead completely and moves wherever and whenever he wants to move as though she should have no say in where they live. Carmel is the only other female character in the book really.  Though we are told she is the homecoming queen, when it counts Carmel can be counted upon. She is not afraid to get physical when she has to, to protect her friends but she never seems to come up with an idea on her own.

I kept waiting for a reason to like any of these characters and found that I simply could not. There was something significant wrong with each one of them.  The heavily racist trope of Voodoo being cast as an evil that something White people must struggle against, even as we were meant to embrace a White murderess was beyond troublesome. In the end I felt let down by the beautiful cover and the intriguing title.  It is a story without style or substance.