Review: In The House of the Wicked by Thomas E Sniegoski, Book 5 of the Remy Chandler Series 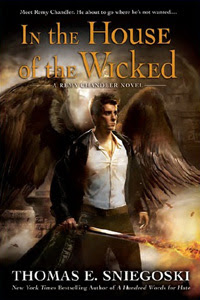 An ancient cabal of sorcerers once performed an incredibly powerful, but incredibly dark ritual that empowered them all – or would have had they not then turned their great powers against one another.

Decades have passed since that moment and these sorcerers have been changed, driven by unnatural hunger – and preying on each other. The oldest and most powerful of them is plotting to repeat his ritual – but on a much grander scale, with the help of a fallen choir of angels, he can bring death on an apocalyptic scale.

But another member of the cabal, one betrayed, how has his own quest for revenge against his former associate. Driven by revenge he is willing to use any tool in his arsenal – even kidnapping the friend of an Archangel to use Remy as a tool for vengeance.

Remy needs to save his friend and to prevent untold death – but both the Sorcerers hunger, and a Seraphim may be the tastiest treat of all.

I think very few books have even close to the level of epic that this series can bring. The world is constantly in peril in grand, dramatic fashion. The tension is perfectly maintained, the plot is powerful and keeps moving and the previous books’ habit of bogging down in Remy’s personal angst is largely absent from this one. From beginning to end, from vague portents and consequences after the world came close to the apocalypse, to a steady build of power as more details become clear. It’s brilliantly paced, it’s thematically maintained, it’s excellently developed – in all, the epic sense and excellent pacing are spot on. It really reached a point where I couldn’t put it down and would have to have my hands broken to make me let go of the kindle -  this book held me. Most of the time.

I love the characters as well-  Remy is a complex conflict between his angelic side and his human side and we finally have him embracing that to some degree rather than constantly denying it that has so characterised the last few books. We also don’t have Remy’s angst – not that it was ever wrong, but it was rather all-consuming. Even Remy’s habit towards internal monologue is… well, not gone, but certainly reduced. And he’s building new relationships with Linda and Ashely adding a greater depth to both him and them and moving away from his moping.

Even the antagonists have depth to them, Stearns and Deacon have backstory, reasoning beyond mere greed and power lust with the underlying fear of mortality to give basis to their actions. And there were a number of grey characters – Francis with his newly divided and questionable loyalties, Squire with his dark depression and hopelessness and Angus who definitely has a dark path but now seems to be in Francis’s remit.

I think talking animals have become much more common in the genre – and a lot of them are fun. I do like the way Marlowe is presented, child like and fun loving – he’s not a unique presentation of talking dogs but he’s still a fun one. What I like far more is the depiction of the cats – aloof, arrogant, impatient and barely tolerant of humans at the best of times – it’s perfect.

The world here doesn’t have such vast exposition as we’ve seen previously – which is probably a good thing, time to digest all the ancient Biblical figures, the different choirs of angels etc. And still it brought an insight into the magic of the world – and a hint of more with Squire’s introduction. But the world building is at a minimum in this book – and probably better for it.

Unfortunately, towards the end of the book the whole story suddenly bloats. Everyone seems to gather together – we have Francis and Angus, Ashley and Squire, Remy, Mulvehill, Deacon, Stearns, Teddy, Scrimshaw, the angels… all it needed was the milkman and the UPS delivery man dropping by. Switching between the huge number of characters all involved – and so many of them not really adding anything – was not so much confusing as just made the whole conclusion of the story so much longer and more dragged out. This, combined with the rather over-dramatic, over-descriptive way that Remy and his powers and actions are described makes the ending drag out to an almost ridiculous degree. Figures feel like they wrestle for hours on end while other people go and have their adventures in different parts of the building. What should have been a grand crescendo became almost comic with the sheer number of bit characters who all decided to descend in force.

This series has had a problem with racial erasure and the last book improved on that a lot by having some very strong POC who helped rebalance the series and, I had hoped, pointed to a change of direction. This book, unfortunately, had no POC.

It did have a gay or bisexual character but this was far from positive. Amaros was the lover of Sariel the now dead head of the Grigori – something we didn’t learn when both angels were actually alive. So we begin with a tragic gay love affair which, in turn, leads Amaros to be a tragically suicidal figure who, in his pain and grief, goes on to try and destroy millions of people. So tragic, suicidal and murderous gay/bisexual man. But there’s more! See, the Grigori in this world are also a group of angels corrupted by the pleasure of humanity who, in turn, corrupted humanity into vice and hedonism. Every time we’ve seen the Grigori in this series they have been presented as depraved, hedonistic, addicts and sybarites; depraved, hedonistic, suicidal, murderous, tragic… it’s like a bingo card.

There’s also no real strong female character. I had hoped that Ashley would enter the story more, but she spent the whole plot being – understandably, traumatised. She had moments where she fought back and tried to escape, but ultimately she was the damsel to be rescued more than anything else. I appreciated more fleshing out of her and Remy’s character and the stronger basis for their relationship – she’s certainly a very real character. But in this story she’s either uninvolved, or a victim with the other characters worried about either her physical safety or whether her sanity will hold. The only other woman in the book who has any lasting presence is Linda, Remy’s love interest and… actually “Remy’s love interest” pretty much encompasses the entirety of the character – and she’s not in on the big secret so she has limited participation.

Given the large cast with numerous characters, the erasure (and awful inclusion of Amaros) just looks all the more dubious.

Were it not for the ending and the erasure, I would have put this book among my favourites – as it is, it’s extremely good -  even an excellent book, but had a couple of flaws preventing it from being perfect. Still an excellent read and part of an excellent series that gets better and better.