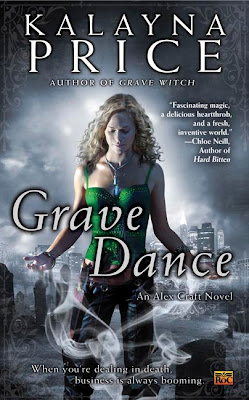 Since the much publicised events of Grave Witch, life has got much better for Alexis. She has steady work, her name is well known (a mixed blessing) and things are much less desperate than before. But she also has some odd repercussions from it – a ghost sidekick for one, and her newly awakened fae blood means she has to do some more adjustments to help her round the iron-saturated world and dance around the fae codes of obligation and language.
But a quiet life can’t continue as the police call her with a curious case of disembodied feet which even she can’t raise a shade from. Further investigating quickly leads to the fae – which pulls her hip deep into fae politics where the Winter Queen is looking to snatch up the independent fae however she can. Alexis’s new status as feykin puts her more at risk; her new people can make demands of her and have expectations of her should her fae blood become known. Then there’s her developing magic which makes her in high demand among the courts – and the subsequent pressure for her to pick a side.
As if that weren’t enough, the Soul Collectors are also involved, magical glamour monsters are running rampant through the streets and seem to be targeting her, her best friend is caught in the cross fire, she may be in the middle of police politics, one of the fae agents is gunning for her, her old friend and now fae changeling wants her to inherit a castle and her long absent lover, Falin has reappeared with very conflicted loyalties.
It’s complicated to say the least.
I love this world. I really really love it. The fae and their courts are always a favourite of mine. The different magic systems, the Soul Collectors, the difficulties of fae language and the web of obligations around them – it just has so many elements I love
I can also feel that it’s really well built – just the way the different law enforcement agencies with their various acronyms are described makes me sure of it. The different and detailed way magic works, the different planes of existence and, so far, everything being extremely consistent. It’s a rich world, a deep world and a very well put together world. It’s one of those worlds that makes me think that Kalayna Price has books upon books of notes into which she’s poured a lot of effort to make sure her world works.
And there are a lot of unique elements – I love the idea of the Awakening causing these new lands to open up. The fae are very very vivid and the magic system is extremely original, being powerful but with limits and rules. And the use of Grave Sight – of death sight and reaching the land of the dead without the usual Necromancy trappings of zombies et al is really new and very different from anything else I’ve seen before.
The one complaint I have stems as much from love of the world as any legitimate unhappiness. I want to know more. I still feel that there’s a lot that hasn’t been explained that I desperately want to know. Like what being a Wyrd witch as opposed to just a witch actually means. What are the other courts of fae? Who and what is the High King? Even all the acronymed police forces left me a little confused because they were introduced then used so quickly. I wanted to know more – a lot, lot more. I’m not sure if more information could have been pushed into this book – but I wanted it and still want it.
And that’s aside from in-story mysteries like Alex’s family history – her deceased mother and her mysterious father. Then there’s the plot questions – how will Alex react to the courts? What will she do with her castle? How will Holly manage her addiction? What will her relationship with the FIB and police force be now? Cliffhangers, questions and mysteries leave me hungering for more.
While I’m 80% happy with the pacing, I do have a couple of little issues. One thing is that there seems to be so much going on in this book, so many different plot lines and some of them, at best, only tangentially connected that stories and major events seem to be ignored or glossed over – there’s just too much to fit in in such a little time. Rianna, Caleb and the independent fae, the different fae courts, the different police organisations, the Soul Collectors, the constructs – there’s so many demands on Alex that I’m constantly battling the feeling that Alex is forgetting something or abandoning someone or not giving something the attention it deserves  - because there’s so much that is so important. And it also means that Alex herself doesn’t feel like a driver to her own story. While she’s involved and makes most of the decisions, she never seems to have chance to catch her breath and set her own path. She rarely has chance to actually investigate because she’s so often leaping from event to disaster to crisis – which gets more and more hectic when the book goes on. Again, that’s not really a complaint because it probably conveys the true sense of the book – hectic, chaotic with more happening than

That 20% is the last 20% of the book though - event keeps happening, they seem random and confusing, Alexis leaps from one random realm to the next without rhyme or reason, new characters leap up, new places, new concepts and it's bemusing to keep up and does a lot to derail the story and my interest in what is happening as we just zap to another fae realm on top of another over and over. There was too much, too quickly and the book was trying to head its way towards a conclusion - instead we ended up up to our neck in new places that didn't add an awful lot.
This book badly falls down when it comes to inclusion of minorities. This book has a vast cast of characters – human, soul collector, witch and fae – and, as far as I can remember (there’s one character described in a way that could, possibly, be a POC) no inclusion. No POC, no GBLT people and the closest to disabled people is the temporary blindness that afflicts Alexis after using her magic. It’s glaring because there are so many characters. Similarly, like in the last book we continue to get language like “coming out” and “fae-phobic” used that is discomforting to say the least. But, I will say she present anti-fae hatred as that – hatred, NOT oppression, which is a vast improvement on what many people do.
The female characters are strong, even with Alexis dragged along by the story as often as she is, she still holds her own in terms of both power and determination. She doesn’t fold or intimidate easily and, with Tamara and Holly, she has some excellent, skilled, capable female friends with their own strength and issues and they most certainly do pass the Bechdel test, even if they do talk about the hot men in Alexis’s life as well. And while she didn’t give Falion the complete cold shoulder when he returned, nor did she let him pretend his months of absence were acceptable.
Alexis as a character also improved on the last book. Her decisions were much less spunky and, while often hurried and difficult, didn’t make me roll my eyes or get a migraine from the foolishness of them. She still does lean on her friends a lot – Caleb and Tamara are particularly long suffering – but we also got to see her do friends things with them and be there for Holly and Caleb when they were in need. The reciprocation made Alexis a much better character in my eyes and pulled her back from being the brink she was teetering on in the first book.
Great world, well written, exciting, well paced story, a large cast of fascinating characters and a strong streak of originality that Urban Fantasy often lacks – there’s just so much to love in this book. There are a few hiccoughs along the way, but generally it’s awesome in the extreme.