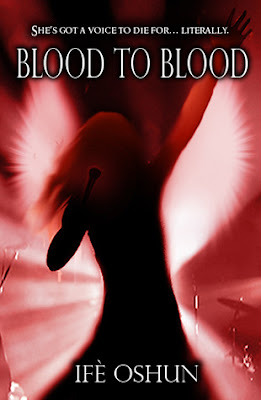 Angelika is a teenager with a dream – she wants to be a singer and she definitely has the talent to make it work. But her parents are less than thrilled with this choice of career and wish she’d do something more conservative, more academic. It isn’t just typical parental worry, though – Angelika is a Shimshana, descendent of fallen angels and a vampire, the vampires from which all other vampires spring. She is immortal, she has powers beyond imagining – and she’s just maturing into all of that.

More, because of the scope of her powers she also has to master them quickly – because her Maha approaches, a ceremony in which she will be presented to the rest of the immortal community – and it will be decided whether she’s too dangerous to be allowed to live.

This is one of those books that would be extremely good as an introduction to a series and is a little flat as a stand alone novel. The main reason for this is there isn’t a lot of plot or story – there’s a huge amount of world building, a lot of character development and a lot of character establishment. In this book we learn who everyone is and why, we learn what’s happening, we learn what everyone is and the history and implications behind that.

It’s a credit to the writing in this book and the imagination of the creation, that I really enjoyed it. Usually I’m put off by books that focus more on character development than actual events – I need a reason to care about people before hearing all about their lives. But with this I was drawn in – Angelika and her world is interesting and extremely unique. The vampires, their origins, the different kinds of magic, the world, the angels – they all bring a very original perspective to some classic Urban Fantasy tropes and creatures

Her struggles aren’t especially deep, nor do they contain a lot of conflict that isn’t relatively easily resolved. Her family disapproving of her career path, the worry about containing her abilities as a Shimshana is handled well – there are dramas but they are dealt with and moved on. The tension and ramifications of her Maha ceremony are set up well with plenty of concern about the massive impact they could have – and resolved without undue difficulty. Again, this isn’t a story about epic conflict – but, really surprisingly for me, nor does it need to me. Angelika doesn’t have to endure the epic doom for her to be a fascinating character. She doesn’t have to fight tooth and nail against a rabidly oppressive family for her excitement about the band or its success to be any less true or emotionally conveyed. She didn’t have to spend months and months facing disasters and grief from her powers for the achievement of her actually controlling them to be any less of an achievement. Perhaps all of the issues being resolved relatively simply is a bit much, but it didn’t break my enjoyment of them.

In fact, one thing I loved about this book and Angelika is she does have a loving and supportive family – even with those family members she doesn’t know so well or isn’t that close to. In a genre which is replete with angst-laden suffering protagonists, it’s a pleasant respite to have a character who can be loved, who can have parents who care for her and support her even when they don’t agree with her, who can have a sibling who will help her through the pitfalls of life and always has her back, who has older siblings who are, perhaps, a little distant and not that close to her but she knows are still there for her. The relationships in this book are very warm and very real - both her familial relationships and with her friends and fellow band members Lulu and Jiles. I do wish we’d seen more of both girls, but even with that they are presented as real people with real personalities, real issues and, as such, bond really well with Angelika.

The carefully crafted writing and very real, human characters (even the non-humans) meant that the book was intriguing, enthralling and engaging without needing to have end-of-the-world epic to carry it. There is a lot of conversation, there is a lot of exposition and there is a lot of internal reflection – and they all work. Which is saying something from me as someone who doesn’t really like any of these things.

The story element I didn’t like was the romance. While the other characters were really well built, I think Sawyer had both too little presence (especially since so much of the book was dedicated to the Maha that Sawyer wasn’t and couldn’t be a part of) for him to be truly as real as the other characters. Add in a very short lived beginning antagonism, 2 abortive attempts at a love triangle and a too-sudden fascination with him just didn’t work for me at all. It felt like too many romance tropes squeezed into a small space without enough connection for it to be more than a crush. Also, Sawyer just doesn’t pass a lot of realism tests for me – a 17 year old super-successful music producer with Top 20 hits and enough money to just buy a house, no question? It’s a stretch and Sawyer feels a lot more like a character in his 20s – even mid-20s – but that would be a much less ideal read with him paired with 16 year old Angelika.

So with a huge amount of praise for this book, why do I say it may fall flat? Mainly because it is a book that focuses on development and character building more than plot building – which means I finish the book with a hungry expectation for more. Ok, everything has been set up beautifully, I know these people, I know this world, I know this protagonist – they matter to me, I care about them, I am perfectly invested in their story – now I want to see where they go. To introduce them all to me so well and then not go anywhere with it would feel rather anticlimactic.

Inclusionwise, the majority of the characters in this book are POC with their own history, full characterisation and presence – and that includes the protagonist, Angelika herself. Angelika is an excellent female protagonist and she is backed by strong, well realised female friends, her mother and her sister who are all very different, very real and very realised.

There is a gay character in the book but he feels awfully tokened and doesn’t make a lot of sense. He’s not there for most of it – then he makes an appearance as a deeply closeted rapper (so has no love interest or out personality) he asks her out on a date during (whyyyy?) which time he drops some wisdom on her then pass her off to her straight love interest. That’s pretty much his involvement – he’s introduced near the very end of the book, with little real connection and then is just shoe horned into her life. It feels tokenistic, maybe, if there’s more books in this series, it will develop.

In the end, I’m left with an odd situation – I’m left with a book that contained many elements that I would, in most circumstances, not enjoy. Yet also a book I read extremely quickly, without pause and without hesitation – and thoroughly enjoyed. I think it’s a credit to the quality of the book that it includes themes, tropes and styles that I’m not a fan of, and still kept me hooked throughout.

A copy of this book wa sprovided by the author
Posted by Sparky at 3:00 PM