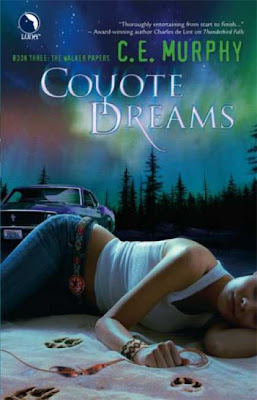 Joanne has relationship issues. There’s her boss who she still has a lot of unresolved feelings for and he seems to have a new girlfriend. And she wakes up with a heavy hang over and a naked man next to her. Definitely some issues to examine

But she’s in high demand, her good friend and co-worker is asleep and won’t wake up. And by her senses the problem is magical, not medical, something is draining his essence. While trying to work through the problem, it rapidly spreads consuming not only her friend’s family, but running rampant through the police force.

The hospitals become strained and the police themselves are reduced to a skeleton crew – and Joanne has only the slightest idea how to fix this, relying on cobbled together research from the internet. Worse, her mentor, coyote, is unavailable and may even be prey to the entity himself. Every time she accesses her abilities, the thing swoops in, seeking to drag her down into unwaking sleep

And the more she learns, the higher the stakes are.

This world is incredibly deep and amazingly fascinating. Joanne’s shamanic power and need to visualise her magic working around her and how that reflects in how she imagines and sees things. I’m glad she’s embracing her powers and her life and beginning to move out, into the world as a shaman.

And this book we saw a lot more of Joanne’s story, who she was as a child and why and why it took her so long to finally come into her shamanic heritage. We saw her grow and learn and learnt about the path it took to develop Joanne from the child she was to the woman she became. In terms of realism and depth it’s really well done.

We learn more on the nature of Coyote and have a lot of information about different realms. This series never just decides to raid Native American culture for concepts so we have a lot of n

The investigation is… difficult. It lags because there’s a lot of dead ends and Joanne is usually on the run. We get to see more people are open to the supernatural but it does feel like a lot of the time Joanne is flailing around not going anywhere or achieving anything. Or even making it worse as she keeps poking at her opponent and getting slapped down and others get caught in the web. There is a sense of frustration and desperation, but I think it dances on the line between portraying frustration and causing it. And towards the end of the book I was past ready for it to be over – it dragged, I’m afraid.

Unfortunately, the problems of the previous books are present in this one in spades. As a shaman, Joanne spends a lot of time in different planes of reality, switching between many many different ones. She also has prophetic dreams which can be surreal, show her the past and show her, again, different planes of reality. And she has visions in the middle of the day, also plunging her into different realms, into the past or various other supernatural, mysterious and magical places.

She can enter any of these places with almost no warning at all.  You’ll be reading along then vision, no plane shifting, wait is this a dream? Is it a memory? Is it a past life? Is this a nightmare? Is this real? Is this a vision of the future? Did this happen or that and where are we now? Is this image metaphorical? Literal? What am I even reading?

I re-read several time. I scratched my head. I frowned. I made sure I was alone and in silence because I could concentrate.  It’s very easy to get lost, very easy to be confused and there’s a lot of times when something happens that has absolutely no relevance to anything. Maybe it gets explained at the end of the book – but that doesn’t stop you being floundering and confused in the meantime.

I also don’t’ understand Joanne. So, she’s decided to embrace her shamanic nature – excellent. And her friend is in danger, in a sleep from which he cannot wake. Damn – time to use shaman powers! Let’s go home and work on the car all day Wait, what? And then she goes on a date after her friend teaches her how to dress and do make up. She goes out dancing and drinking and it’s fun and she wonders about her relationship with her boss and this new guy and…

…hello? Your friend? In a coma? And his wife? And half the precinct? Did you forget? This isn’t a moment when she just runs out of leads, this is the very first time she decides to do something, long before she has frustrated any possibilities – or even tried any possibilities.

I also hate how Joanne behaved towards Barbara. Yes, eventually she gets cause to dislike her, but Joanne dislikes her from the very first meeting. She blames getting drunk and waking up in bed with a strange man (which she handles moderately well in terms of shock and horror – especially since a lot of that is linked to the possibility they didn’t use contraception, but there’s still a lot of “I’m not that woman!”) on Barbara for flirting with her boss (who she has a lot of sexual chemistry with). She hates Barbara on sight and frequently thinks venomous things about her for no good reason beyond the fact she’s attractive. And when her boss gives Barbara the topaz, the protective spell Joanne lost it. I can understand her being angry at her boss giving away a gift I can also understand her anger that her boss is not taking her protection seriously. But she had a full scale temper tantrum in the middle of the restaurant and then hit her boss… I actually stepped back and re-read because I couldn’t believe I’d read it the first time.

Joanne does have some strong female friends to try and contrast this but I wish we could see more of them and have them more deeply involved in her story to be a good balance.

There are a few minor POC and, of course, Joanne herself is half Native American and we got to see a lot more about her and her past. There was also considerable exploration of Native American legends and beliefs that were so heavily involved in this book. It was hard to follow, but there was no raiding of the Navajo culture for a spare deity and then moving on; there was explanation and exploration and a determination to create some depth to the portrayal

There were no GBLT people again – but this time there was some homophobia. And no, there’s no point in deciding something is “UnPC” if you do it anyway and back it up with a straight man “swishing”. Seriously – it’s bad enough to do this but to do this in a book that doesn’t bother to acknowledge GBLT people exist is doubly annoying.

Despite these moments, Joanne is a generally competent woman who has a lot of realness to her.  She makes mistakes, but they’re (generally) reasonable ones. She’s deeply conflicted between her natural cynicism and her new embrace of her mystical abilities. I love her conflict with cynics because she herself would be one of them and completely agrees with where they’re coming from. She’s still coming to terms with and working on her past and what that means to her and what she does; she has regret but isn’t prone to wallowing in it. She has strong friend relationships, she has a fascinating relationship with her boss which is one of the few sexual tension stories I really like and really appreciate. Her and Gary are an awesome team, his strength, his weight behind her is so wonderful – and it’s nice to see an older man presented in a way where he could certainly be sexual at the right moment. In fact, I generally love this character and the way she relates to people around her – which is why some of her behaviour in this book is so jarring to me.

Ultimately, I clung to the parts of this book I liked. Joanne’s character, her friends, the fact the world and the creatures are well researched, the depth of the character and even, to a lesser degree, the twists of the story. But, ultimately, I was too confused and it was too hard work for me to actually enjoy it – and that’s just a crying shame.