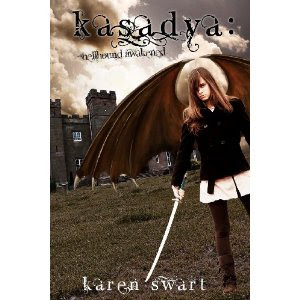 This book is one of the more original concepts I’ve come across in a long time. Demons in hell who have escaped their bondage in all their myriad forms and seek to corrupt and control humanity, feeding on their sin. The Fallen, angels that fell but sought forgiveness being tasked with defeating these demons and protecting humanity. And these Fallen come in so many forms – different kinds of fae, vampires, werewolves, even things like harpies and griffins. There’s immense diversity there. And then the hellhounds, created expressly to bring down the demons and level the playing field. It’s an amazingly rich world

Kas, as a young hellhound is an interesting character. I won’t say she’s unique in anyway, but she has some conflicts, not least of which is her frustration that she and hers must sacrifice themselves for humanity that seems driven to pursue self-destruction – and the unfairness of her being punished for what her ancestors did.

The story itself follows an incredibly interesting path with many different twists and turns, each unveiling and entirely new chapter, a new section of the world, and following Kasadya’s path from neophyte to formidable warrior in a world that is rapidly changing.

Unfortunately, despite all this good potential, the book fell very flat for me for me.

Firstly, this felt like several books rolled into one, like a series was compressed. We begin with a typical YA school setting; Kas has gone to supernatural school, she doesn’t like it, she’s bitter about her parents, there are mean girls, her teacher is mean but she’s oh-so-special-and-good.

Too many stories and none of them were developed as much as they could have been. They felt shallow and not properly built upon, almost like the author starts writing a story then suddenly switches to a different one, then suddenly she gets bored of that and moves to another one entirely.  They’d have been better served stretched out over 3 books to have greater impact, development and world building.

The second major problem is the main character’s voice. She starts as a whiny teenager, stropping and tantrumming around, drowning in angst and OMG IT’S NOT FAIR that makes her intensely unlikeable. It doesn’t help that the dialogue is, in general, pretty stilted and not very natural. And then after 2 years in the gladiator pits… she’s the same person! She’s more dangerous and lethal but her voice is the same and nothing ruins taking a level in badass like a character suddenly declaring “OMG!” Not “Oh My God”, literally “OMG”. Even Buffy would have a hard job passing that off as cool and dangerous snark. The only real growth we get out of her is a level of cockiness and a need to stare everyone down.

The story just ends up filled with loose ends and random inserts that never develop into anything because the story keeps changing. She makes friends at school, who then disappear. We have some obligatory Mean Girls, because every school must have Mean Girls who hate the protagonist on sight, but only one remains relevant and her animosity is still baseless. We have a love interest – who ceases to become relevant almost as soon as he’s introduced, and then a love triangle that does likewise and then the brother of one of the love triangle members which, again, doesn’t maintain relevance. The story changes so quickly and so shallowly that I can’t follow or becoming invested in any of these storylines in any major way.

The sad thing is, these storylines could have been awesome. With the world presented and the skeleton plots laid down this could have been a great series. Kasadya, cheated of a normal life, growing and learning in school to accept her role and what that means, making friends and enemies but ultimately mastering herself. Kasadya, now much grown, is pulled from her near complete school career by a devilish plot and now must fight for her life among hordes of demons, forced into gladiatorial combat again and again – surrounded by blood and death, loss, despair and hopelessness while she hardens in the flame and becomes ever more dangerous. Kasadya, free from the demons now uses her new self in a changed world, pushing unusual tactics with humans much to the disapproval of her former mentors and loves – but showing time and again how she’s grown. Kasadya realising the cost of hardening and her hellhound nature, reconnects with those she left behind to try and resurrect a forgotten, softer side and seek balance and even redemption.

There’s 4 books there. 4 awesome books. But, instead, it was shoehorned into one, with no development or foundation and all the side plots and related plots that would come off those 4 are brutally pruned back to the bare bones and left hanging, kind of lost and pointless.

Inclusionwise, I think some of her friends are POC by their physical description – but if they are it’s a passing mention and I’m not even sure about that. There are no GBLT people and the way the book is described is extremely heteronormative and gender essentialist – with the need for female/male partnerships for example.

There’s also an unpleasant moment in the book that really annoys me. After several pages of us being told that sin feeds the demons and much anger aimed at humans for sinning and helping the demons – mentioning greed and infidelity (though one of the weaknesses of the world building of this book is that the definition of “sin” is never developed) - we then have a werewolf threaten to rape Kas. Frequently. Then pin her to the ground. When she reacts with a weapon and hurts him, she is the one who is in trouble – unreservedly her without any consideration of extenuating circumstances – or even the sin that, surely, that the werewolf was committing, unchallenged, feeding the demons.

There was immense potential here and if it had been spread out over several books with the world and characters fully developed, I would have loved this. As it was it’s a crying shame