To T-Dog in Memoriam

As you know doubt already know, on the last episode of The Walking Dead, we lost T-Dog.  For much of the three seasons that The Walking Dead has been on the air, T-Dog has been the only Black person. We should have been suspicious at the start of this season when T-Dog suddenly started getting speaking lines. Obviously, they had to give him some characterization, so that we could actually feel pain at his passing. We feel that T-Dog is owed a little more than that and this is why we have collected the following images from various sources online. 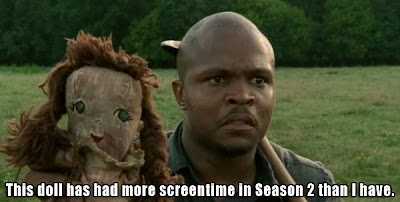 T-Dog deserved so much more than he got on this show. If I were Oscar, I'd be worried about what's in store for him.  T-Dog was never valued in the same way as the other characters.  The writers never invested in him and he functioned a little more than a person to have in crowd scenes to add a little diversity, the least that we can do is take a moment to appreciate a character that never got any respect on The Walking Dead.