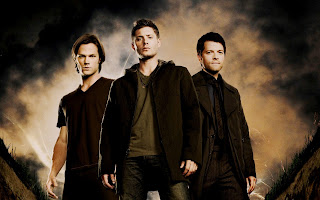 A man is under his car, fixing it in the middle of the night when a woman he calls “honey” shows up snarls about someone called Sarah Alcott. She kicks out the jack, trapping him under the car, then gets in it and drives off. Messy.

Dean gets news of this, but Sam wants to know why he hasn’t killed Benny. He can get being an ally with Benny while in Purgatory to get out, but why not kill him when he’s topside? Sam raises the subject of Amy (um… Amy was actively preying in people) and Dean counters with the werewolf from the most pointless episode of Supernatural ever. Dean draws the line, Benny slips up and another hunter kills him so be it – but it won’t be Dean (personally I would have gone with “he was my friend and ally while I was in Hell and you’d give up on me” because I twist the knife like that).

Dean fills in Sam and adds that the wife doesn’t remember anything. Sam doubts it’s their thing but Dean snaps at him. And speaking of pointless, we also have Garth, the most inept hunter there has ever been who is investigating the case as a Texas Ranger – in Missouri. Worse – he’s giving advice to other hunters. He’s the “new Bobby” (Dean treats this with all the horror and rage it deserves). He even plays dubious mentor to Sam and Dean (please let something eat him. Come back Bobby, even vengeful spirit Bobby is better than this).

They find ectoplasm and that the dead man had the word “Alcott” carved into his chest with the dead woman’s fingernails.  Checking with the wife, she confirms the black out, a feeling of intense rage and that Sarah Alcott was the woman her husband took to the prom – 37 years ago. Having dinner, Dean comments on the omnipresence of Confederate flags everywhere to avoid talking about Purgatory and we learn Garth’s story – he killed the tooth fairy. Please can something eat him.

To the next crime, Scott, the son of the dead man and his wife – goes to a shop and runs into Jeff, a man he doesn’t care for very much. The demands his money back, throws hot coffee on him and then beats him to goo with a shovel. In the mirror we see him overlaid with a ghostly figure. “Sussex” is written in blood at the scene. And the CCTV shows a bright white light where Scott’s head should be

Some more dead ends and Sam gets a flashback with Amelia – where they’ve scattered clothes everywhere in their eagerness to get to bed and Sam is still in bed wearing a vest and we learn that Amelia lost her husband – for the 3 people in the audience who actually care. And Garth keeps irritating Dean by trying to imitate Bobby and step into his shoes.

They do find out that Scott and Jeff were in business together and the business went bankrupt – the business was called Sussex. Bobby’s diary says the green ectoplasm they’ve been finding is a spectre – an avenging ghost, forcing people to act on their grudges.  The last time Bobby saw this it was after a grave desecration. They look up for any local reports and find the confederate tomb of the unknown soldier was desecrated – and the murders started the next day. Sam is not thrilled at the idea of burning a confederate soldier’s bones in a town saturated with the confederate flag.

That night they go in and check the grave and Sam finds a loop of strong that will be significant, no doubt. They heard there was some graffiti and the casket was open – but when they open the casket the guns are still present – they find it odd they hadn’t been stolen. They start to burn the bones but Garth thinks they should say something – Dean says “we won” and lights the fire.

But there’s another murder – a policeman getting Scott’s inhaler touches his keys and takes out the sheriff who keeps making him write his reports. Sam, Dean and pointless arrive and find the green goo – and start thinking they either got the wrong body or the grave desecrators did take an object and the spectre is in that.

Dean goes chasing after the next possessed victim heading to the hospital while Sam and Garth run to the library to try and find out who the Unknown Soldier was. Not easy, given the Unknown part, but the leading theory is Corporal Collins of the Union who shot and killed his brother who fought for the Confederacy. They discover that the soldiers often war a penny on a string – which was missing from the grave , only the string that Sam found.

Dean fights the possessed man but he has supernatural strength – and the spectre likes how Dean smells (unresolved grudges? Oh yeah, Dean may have some) and gives Dean the penny.

Sam and Garth return to the hotel room to find Dean, ectoplasm dripping from his ear, with a gun telling Sam he should have looked for him while he was in Purgatory. I quite agree – shoot him Dean! And we get a brief flash back of how the coin changed so many hands which was kind of fun. Dean begins the fun round up of the bad things Sam has done – not mistakes – the choices (he missed out several but still got all the real doozies).  Some fighting in which Dean gets a clear advantage and Garth steps in. Dean points out Sam’s betrayal and Sam brings up Benny. To which Dean points out Benny has been more of a brother to him that year than Sam has ever been (pretty much true) especially after Sam and Castiel both let him down. Benny’s the only one who didn’t. Grath hit’s Dean and knocks the coin out of his hand

Garth picks up the penny but it doesn’t affect him – and he can melt it down. Garth is just too mellow to hold grudges. Then steps in to give annoying Bobby-style advice to make up with Sam: and Dean gives him Bobby’s hat.

There were also some more Sam and Amelia flashbacks. They fall in love. Woo.

Sam and Dean meet again and Sam dumps on Dean for his terrible awful not just ignoring the fact that Sam abandoned him in Hell for a year and demands Dean move on or he will. Dean agrees. And Sam adds that he may be the one to kill Benny, which Dean says they’ll deal with when it happens.

Am I supposed to feel sorry for Garth with his “Bobby belonged to all of us”? Was I supposed to find his attempt to be Bobby cute? Not only was he continually trying – and failing – to be Bobby but he also tried to move in as the surrogate father figure with advice and expecting Dean to share any tension between him and Sam with them. Bobby was more of a father to them than John, Garth trying to step into those shoes was waaay over the line. What a terrible thing to do to poor Bobby.

Dean did not shoot Sam. Alas.

But we did get a teeny tiny insight to the HUGE number of issues Dean is carrying round. About time some of them were addressed. And the rest where yet again swept under the rug with “let it go” and “Sam is all you have” which has been happening since Season 2.

And SAM plays victim? Really? After having a litany of all the shit he dumps on Dean on a regular basis, Sam claims victimhood? And he takes a year off hunting has spent several occasions in this season talking about how he wants to quit hunting monsters but now he’s all gung ho after Benny? He didn’t give a damn about hunting monsters for a year but because Dean’s friendly with one of them that repeatedly saved his life, Sam wants to get to the choppy choppy? What’s that? Spite? Tantrum? Pouting? Needing to throw something at Dean because Dean has (legitimately) just thrown so much at Sam?