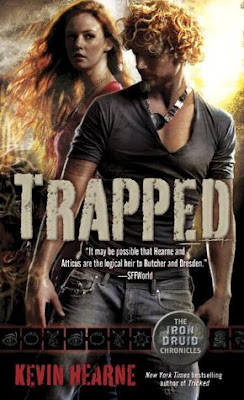 12 years have passed since Tricked, and Atticus has finally finished training Granuaile all she needs to know to become a druid. The final step is to connect with Gaia and tattoo her with the Celtic knots that tie druids to the Earth, a process that should take several months.

Unfortunately, the only place this can be done is Europe. Not normally a problem, but druids don’t normally have long standing grudges with Olympic gods. Through their machinations, Europe is largely off limits to plane shifting, with only one place Atticus can travel to – the very foot of Mount Olympus, right under the gaze of Bacchus who very much wants him dead.

And the Olympians aren’t the only ones plotting. Dark elves and vampires are hunting Atticus for reasons unknown and even one of the Tuatha de Danaan is sending hit squads and spreading information about him. As word of him being alive gets out, more of his old grudges surface and he finds himself, again on many people’s hit lists and enmeshed in many schemes.

If that wasn’t enough – Loki has been freed. God of chaos, of trickery, of flame – he’s immensely powerful and terrifyingly unpredictable. The first shots of Ragnarok have been fired, Hel’s armies are marching and the Norse call on Attics to fulfil his obligation to them

All told, it’s quite a busy time for Atticus.

I feel, before I fall into full fanpoodling goodness, I should begin this with a caveat. I am a mythology geek. I love mythology. I love the obscure deities from a plethora of pantheons. I love the old legends and myths. I love even the rare and unusual tales that are lurking in the Celtic, Norse and Greek lore that rarely see the light of day.

As such the story telling, the info dumping, the random encounters and references, the sudden insights and all of that wonderful drawing on lore and history and ancient stories all pull me in and make me a very very very happy geek. Especially how it does use not just the major figures from the pantheons, but even the more obscure characters that are not well known today – it shows an incredible amount of research and knowledge of someone who has really delved into not just aspects of these old myths, but someone who has embraced them in their entirety.

To me, this makes for an excellent world. It makes for a world that is rich and full and has massive possibility. It means I can gleefully devour the book in seconds and grin over every little hint and every little story and character I recognise.

It also means that if you’re not a mythology buff or mythology isn’t a major interest of yours, you may find these moments drag a little and aren’t for you. To me, I loved them but I can see how it could be a matter of taste.

Even with the stories, the book is well paced with a lot going on to keep it exciting. Atticus has to try and find a way to bind Granuaile to the earth but has to do so in the teeth of a plot that involves vampires, dark elves, Tuatha de Danaan and Olympians. Trying to keep the various factions at bay long enough to get peace is a constant battle that requires many interruptions, desperate fights and lots of cunning. If that weren’t enough, we have some extra epic and excitement provided by Atticus’s commitment to the Norse and the threat that Loki, scarily powerful and terrifyingly unpredictable, presents yet another exciting force in the world. This book is very much one of being bombarded and being manipulated. Atticus and Granuaile stand in the middle of many plots and have many obligations and ties on them pulling them different ways. Not just the Norse, but Leif the vampire is pulling his own puppet strings, Brighit and the Morrigan are duelling over the leadership of the Tuatha de Danaan and there are machinations by unknown hands we don’t even know yet. And everything they do sets off a chain reaction in this crowded world – they manage to make Bacchus and Faunus back off, but in doing so risk offending both Olympian pantheons as well, is just one example. The sheer richness of the world means there are constant domino effects and real consequences to exerting any kind of power and influence in the world.

There’s also some development on the romance between Granuaile and Atticus – in that it’s finally happening. It’s a romance that, in many ways, bucks so many of the romance tropes. It took 12 years to develop, it was built not just on love but on genuine affection and respect. And while Atticus maintained a position of mentor and teacher over Granuaile he refused to have a relationship until it was more appropriate and they were on a more equal setting. It subverted so much of what is common in romances. And when it happened? It happened. It didn’t become the all consuming passion of the book, Atticus and Granuaile didn’t become new people because they’re now having sex. While Atticus always worries about her, he didn’t start treating her like a delicate little flower that needed to be sheltered and protected. And they had a relationship free from the usual love triangles, convoluted misunderstandings and sheer drama that is so common. It became part of the plot and the characters, it didn’t consume them.

I love the characters. Atticus is just so much fun. He’s witty and clever, he’s epic when it’s called upon, powerful without being arrogant with it and without trying to impose on people. He acts when needed but otherwise seeks a quiet life. He enjoys life, he’s wry and hilarious in his observations and he’s a perfect protagonist, probably my favourite of any book I’ve read. And he has Oberon – who is awesome and the best talking animal you will never see. He doesn’t play a huge role in this book but every time he appears, awesome is bound to follow. Granuaile really completes them to form an excellently strong team. Even the many characters they meet – normally briefly and usually gods – have a powerful sense of realness and a perfect level of mischief and desire for things to be “interesting”.

Now I need to tke a breath and put my critical hat on. There are not many characters in this book; it largely focusing on Atticus and Granuaile and the deities from the Tuatha de Danaan. There is very little diversity, no POC, no GBLT people and I really wish the series had more strength in its background for the erasure to be more easily forgiven, but, in conscience, I can’t say it has. Tricked had some excellent portrayals of Native Americans and Native American tradition and we have Atticus’s history with his ex-wife – but for a series of over 5 books now, it’s totally straight and very very White. Much as it pains the fandpoodle in me to say it.

Granuaile is an excellent female character. Despite having been Atticus’s companion and student for a long time and his obvious experience in comparison to her, she is very much his equal. There are several things she does better than him, skills she has that he acknowledges he can’t match and doesn’t resent at all. She is in no way subservient to him or lesser to him and he has a heavy respect for her and her abilities. Even when he is her teacher, he is never presented as her superior. Granuaile herself also does an excellent job of countering anyone who tries to look down on her and continually challenges sexism or contempt – be they from patronising shop owners or even the Tuatha De Danaan themselves, being more than willing to use their sexism against them. Even Oberon is fully aware of this and once instructs Atticus to “fall on your knees now!” when he offends her. She’s an awesome character and works so well with Atticus.

The iron Druid Chronicles will always be my desert island books; if I must only choose one set of books to read ever again, this series would win. My only sadness now is having to wait until next year – next year! – for the next book. Woe, I am suffering!