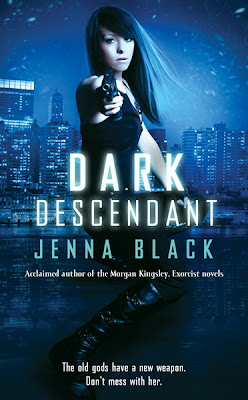 Nikki is a private detective with a difficult past, a loving family and an unusual case – emit believes his sister has been taken by a cult and wants her to investigate. Normally she’d listen to her instincts, but since it’s an ideal excuse to get out of an awkward blind date, it sounds much more appealing.

Until she finds herself driving on an icy road – and running over and killing Emmitt as he smiled and didn’t even try to save himself.

Which rapidly leads her in a room full of people who think she just killed their friend – worse, they think she did it on purpose to steal his power. She’s a descendent of Artemis, the goddess of the hunt, and her powers have been activated now she has killed another descendent of a deity – something the others – the other Liberi – have a hard time believing she did by accident.

And it doesn’t stop there – as a descendent of Artemis, she is one of the rarest deity bloodlines and her powers are in very high demand by both these Liberi – and the Olympians; an ancient, powerful and completely ruthless group of Liberi who will resort to any tactic to bring her to their side.

I like this world – the idea of the immortal descendants of all the gods who can only die if they are killed by other humans descended from the gods is a fascinating one. The competing organisations of demi-deities promises to be a fun and epic fight.

The story itself is very focused – we don’t have much in the way of side plots or distractions and the action happens appropriately, downtime happening off the page rather than having to laboriously detail the grunt work and the daily grind. This comes together to make it a very well paced book, it’s not a long book and not a word is wasted; it’s on target and at no point is it not telling the story. If anything, I think the book may be sparse in places; Nikki’s interactions with the Liberi she lives with would have been interesting to see and to add more than just names to characters. At the same time, it wasn’t necessary knowledge for the story and we were never left without information we needed to make the plot hold together – so all of this development can pause for a later book. The only issue I can raise on the excellent pacing is that Nikki often doesn’t drive her own plot. This is understandable given that she has been immersed in a completely new, alien world. But at times she does seem to hide from it and just hope it all goes away – again, that’s probably understandable.

There’s a lot of scope for expansion in the series, and a lot of questions and development that makes me look forward to the next book. The characters we see have some depth to them and Nikki herself is an intriguing protagonist. She has a combination of strength and determination mixed with considerable compassion and almost inability to do harm or endure people’s suffering that we rarely see presented so overtly in the genre.

And, of course, I am always a geeky fanpoodle over mythology. This has the potential for infinite expansion which I’m really looking forward to. But even aside from the world, there are so many characters that have a lot of potential that have only been touched upon –most of the Liberi we know little about, we know little about everyone’s powers or what it means to be a Liberi. We have Nikki’s family history even her relationship with her step parents – there’s a lot to be developed here, a lot to encourage me to return.

One thing there isn’t, which didn’t just surprised me but positively shocked me, is that there is no real scope of a love interest. Oh, there are a couple of characters who could possibly be if you assume the negative tension between them now will develop into more – but that’s not because its been hinted at, more because we’ve seen these tropes repeated a number of times and expect them to follow the same path. It is rare to see an Urban Fantasy protagonist – especially a female urban fantasy protagonist – who doesn’t have a hot guy lurking around the edges who isn’t already lined up to be her partner at some point in the series. For that alone I give this book major points for uniqueness.

Inclusionwise we have problems. Which is surprising considering how few minorities there actually are in this book. Racially, the main POC we have is Jamaal – a man with almost animalistic rage, who hates the protagonist from the very beginning, doesn’t listen to reason and even faces banishment from his people since he just can’t control himself. He’s aggressive, brutal, emotional, menacing and very very very violent. And he is the only one among the Liberi who treats Nikki like this – the others may be suspicious or wary – but it’s only Jamaal who just cannot possibly control his emotions and attacks in an almost bestial manner until he is finally – and brutally – slapped down.

Other than that we have a couple of young Black men who are aggressive hoodlums she sees and knows she can depend on to be spoiling for a fight.

In terms of sexuality we have no GBLT characters. But we do have Nikki preying on someone’s “metrosexuality” and homophobia to try and provoke a gay bashing. And later we get charming usage of an anti-gay slur. Don’t you just love books where the author can’t be bothered to include a single GBLT character, but is happy to throw the slurs around?

And then there’s Blake. Blake is a character who is redeemed through the story which is more than a little discomforting. With the power of Eros, he can force people to be sexually aroused and attracted to him – and he uses this power as a threat – that he will rape people if they do not do as he asks. He threatens Nikki with it and he threatens Alexis (one of the Olympians) with it – and it’s implied that he may have carried out the threat as well.

Part of Nikki’s bleeding-heartness is that, when she shoots the rapist hunting her down – she apologises. Later he comes to her and apologises to her – he only threatened to rape her he wouldn’t have done it! Honest! (He totally would have raped Alexis though – which would be totally ok it seems). Because threatening to rape people and only being willing to rape some people is... what? Redeeming? Ok? What? We go on to have him treated with… wariness but hardly how you would expect – especially when he becomes her sister’s date and constant companion as a bodyguard. Yes, Nikki isn’t happy about this, but she’s talked round with relatively little effort. The apologetic redeemed rapist is in your story making you cringe.

The portrayal of women in the story is interesting and mixed. My main question is the numbers of women. We see 3 Olympians (and 1 servant) in Konstanin’s group – and all 4 are men. We see 8 Liberi in Andersen’s group and only 1 of them is a woman. Why so many men? There are only 3 women who take an active role in this book and only really 4 women in total.

And then there’s the fact that Maggie is, of course, the Liberi who is most willing to accept and trust Nikki, the kind one, the gentle one when everyone else is varying levels of hostile to wary. Nikki’s sister Sophia is also extremely nice and gentle and sweet. Even Nikki is repeatedly presented (and refers to herself as) a bleeding heart. I’m not against Nikki’s compassion –in fact, I think a lot of urban fantasy protagonists are written as unnecessarily harsh, aggressive and even callous to prove how tough they are. But having all 3 of the women we see in the story all be remarkable for their compassion. Then there’s the victimisation - Sophia ends up being a kidnap victim who is beaten and – it is implied – raped to get at Nikki. For that matter, Anderson’s wife, Emma, is kidnapped, tortured and raped to get at Anderson. That’s half of the women in the book as victims – rape victims – to get at other characters, they live but they’re still fridged.

Yet there is also a lot of challenge of sexism. Nikki doesn’t tolerate being patronised or spoken down to and is quick to spot and challenge men who do. Maggie complains about the male egos that refuse to let her carry heavy loads even though, as a descendant of Zeus, she has the strength of Heracles. These little challenges throughout are good to see.

I liked the story, the concept and the world of this book. I think it has vast potential to be a fascinating series and immense fun. But it has issues in it that make me cringe and feel deeply uncomfortable reading it that really detract from what would be a truly excellent book.