Agatha leads a quiet, but frustrating life as a lab assistant, working for the brilliant, but eccentric Spark that runs her town, her dreams tortured by inspiration she could never quite reach. In the past, most of Europa was a patchwork of small kingdoms controlled or supported by Spark scientists and their armies of monsters, machines or combinations of both – but much of that changed when the Baron created his empire, absorbing the little kingdoms.
And the day came when Agatha’s town went from being a nominal, self-governing part of the empire to being fully under the Baron’s control. In the take over, Agatha found herself moved from her home to the Baron’s own floating castle. There she sees ever more of the Baron’s forces and the eccentric creations of Sparks across the continent – as well as develop some contact with the Baron’s son, Gil
But she also learns far more about her past, her talents and her past frustrations, opening up vats new possibilities but also putting her in considerable danger, and demand.
I’ve started reading a lot of Steampunk because there’s so much I love about it – the aesthetic, the slightly whacky technology, the glorious stylishness of it, the fun, proper and quirky characters, the wonderful combination of completely out there concepts mixed with Victorian sensibilities; it’s immense fun, it’s beautiful and it is incredibly imaginative and creative.
And on those grounds Girl Genius: Agatha H and the Airship City is the very epitome of Steampunk. But not just Steampunk – that whole genre of over the top adventure novels is perfectly included and lampooned in this book. The hero with his contrived, dramatic language and over the top heroics, who never ever dies and sees everything in clichés! The evil geniuses and their completely out of their mind nefarious schemes! The plucky girl side-kick (I wrote a hundred of my favourite lines from this book and stopped because I was quoting nearly the entire book. But when Othar suggests that Agatha set him free as his ‘Spunky girl sidekick’ her response, as someone who has been round Sparks all her life just has to be quoted:
“I’d rather not end up being the Easily Duped Minion Who Sets the Insanely Dangerous Experiment free. Or the Hostage Who Ensures the Smooth-Talking Villain’s escape.”

“Ah…”
“I don’t have any proof that you really are Othar Tryggvassen, or that you’re really human.”
“Err”
“This Girl Sidekick job doesn’t call for a lot of smarts does it?”

Seriously I have a separate book of quotes I wanted to sue for the review because there were so many awesome exchanges like this. The Baron who is effortlessly and awesomely competent and evil and sets things up to constantly test himself and his son (poor Gil. Who also keeps getting flack from Agatha and everyone else over someone he killed, despite his constant protest “he threw a bomb at me!”) including taking a fight with the intrepid hero into a neighbouring room because they’d destroyed everything interesting in his lab. He’s just one of several characters I love – the evil baron, the long suffering heir-in-training and possible love interest, Gil and definitely the strangely dangerous creatures, the Jagermonsters. In fact, when compiling quotes? I could have confined myself entirely to what the Jagermonsters said or did and still be creased with laughter.
Depsite the campy, even slightly silly joy of this book, the characters were well made. Even relatively minor characters are surprisingly complex, including the other kids in the castle, the Mean Girl who, yes, was a Mean girl but had her Mean Girlness explained and given a level of depth and understanding. Even the Baron is a highly sympathetic character with his eternal frustration with all the silly people around him – even if he has his own brand of silliness as well (everyone is! I love all of these characters even the villains). Bangladesh is a lethal, callous killer – but even she has a depth and reason beyond her joy of killing and maiming (and she’s so much fun!)
And Agatha? A strong female character who is strong despite having no combat skills! Whose talents come from her brain and her smarts – but not just from her genius and her inventions, but from simple sense and ability to make sensible plans. And they don’t always work, because she’s not perfect and sometimes she’s emotional, again for good reason – but she’s always sensible and funny and clever. She balances suspicion and trust, she’s good but not above being petty, she likes people without being naive and she absolutely, resolutely is NOT a Minion OR a Sidekick and definitely Not Spunky. She is awesome and she’s incredibly fun.
And this is all to a gloriously wonderful world. A Europa largely dominated by the Baron’s empire but split with lots of wasteland left behind by the warring Sparks. And Sparks define the book – Mad Scientists who can create anything rule the world – not always because they want to world, sometimes you just conquer a small nation tom prove you can actually do so with nothing more than an army of intelligent lobsters. Their creations, monsters, machines and many more roam the world in infinite diversity of everything you can imagine, each bringing their own brand of chaos. It’s exciting, it’s over the top, it’s gloriously true to the genre, it’s stylish and it’s so much incredible fun.
But it doesn’t just rely on a zany, eccentric, amazing world nor on it’s incredible humour – it also has an excellent story. A melodramatic, Technicolour, out of this world story – but an excellent story nevertheless. Agatha, thrust out of her safe, if frustrating life when her town is invaded by the Baron. From there we have a lot of foreshadowing about Agatha’s secret, hidden history  that keeps developing as the book progresses – and still managed to surprise me. Her exploration of the Baron’s airship – and the government and characters he’d built around himself – is fascinating, well paced (and massive fun) with lots and lots of hooks for future plot points, more world building, more randomness (and more fun). The story was one where things kept happening in perfectly balanced amounts – action, world building, hints for future plot lines, character development – none of it over done, none of it dragging, none of it passed over. It’s excellently written. And fun.
Inclusionwise, Agatha is an awesome female character with some pretty good female friends and female side-characters (none of them are developed much, but, aside from Agatha and maybe Gil, none of the other characters get a lot of time on them. Despite this there’s a lot conveyed in the thumbnails we do see of them). We also have a number of POC – again, not many have a long part but no-one does except Agatha and Gil and I think many of them are going to be recurring characters. It’s interesting to see that the Baron’s European-wide empire isn’t just monochrome. Alas, there are no GBLT people.
I may have mentioned this book is fun a few times. But that’s my ultimate summation of this. I have never laughed out loud as often with a book. And when not laughing I read this book with an immense silly grin on my face. I couldn’t put it down, it remained glued to my fingers the minute I got into the first chapter and I loved every word. The writing is immensely clever, extremely funny and perfectly balanced and constantly laced with heavy dollops of that zany fun in every single line. It’s rare to see, but there’s not one line of this book I’d changed, not one sentence I’d edit, not one scene I’d omit.
Even the author’s fun little fake autobiographies are awesomely fun.
I would heartily advise this book to everyone. If you love Steampunk you’ll love it. If you don’t love Steampunk you’ll still love it. It’s just that awesome. It’s one of those books I regret only having 5 fangs to give.

A copy of this book was provided by the publisher for review
Before I end I have to mention that when Titan Books approached us offering a copy of this book, both Rene and I were very eager to read it since it looked like so much fun and such an excellent story. Alas for Rene, since Titan Books is based in the UK (or this branch is anyway) the books arrived on my doorstep, so I got to read it and she didn’t.
And they proved to be far better, far more awesome and far more fun than we ever imagined or expected; quite possibly the best Steampunk I have ever read. So to Rene I have to say….
…They also sent me the sequel! 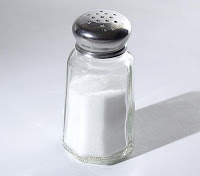