To Walk the Night (Kat Richardson #1) by E.S. Moore 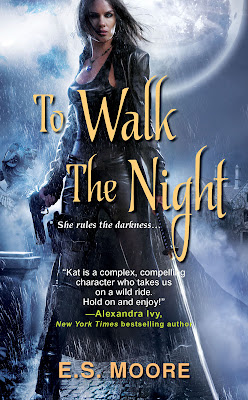 Kat Redding is known as Lady Death to the vampires. Armed with silver, illegal since the Uprising when vampires and werewolves drove humans into virtual hiding at night, she preys on the predators, saving the lives of the Purebloods, the untainted humanity, as much as she can.

But Kat is one of the tainted herself, a vampire desperately struggling to control her own hunger and anger. A drive that she cannot restrain and still has her leaving bodies in her wake; even as she tries to prey on the human predators, she cannot escape the truth that she is as much a killer as the ones she hunts.

And then came the Luna Cult, knowing more than they should, with an offer for her. A chance to take down a Vampire House she would normally consider too big to tackle, and save innumerable lives in the process. But it involves working with the werewolves of the cult, people she continues to see as enemy. Or, perhaps worse, people she is beginning to see as people.

There are a lot of vampires out there now and it can be hard to find a book that doesn’t follow some very predictable patterns. So I was very happy to see some of the original nuances that this book brought, The Taint that turns “Purebloods” into vampires or werewolves, the problems with mixing the Taint, the vampire houses, the Uprising causing humanity to pretty much cede the night to the Tainted: there’s a lot of elements here that make it very different from most vampire books. There’s an originality that makes it fascinating and a world I want to explore. The world building is also very solid and consistent with some decent development – not only do people stay in after the curfew but there are other problems as well, like college campuses being only a quarter full because they were hit first as an easy source of quick recruits by the vampire houses. Things like this, extra details, extra considerations of what other effects would come from an event like the Uprising really add a lot of meat to the world. It gives it a realness and makes the events more authentic rather than just useful story points the author makes up as they go along.

The story itself is also an interesting one and one that’s perfect for the first book in a series. It gives us a chance to explore several of the main characters (albeit not as much as I would like in one case as I mention below) as well as the world setting , all without much in the way of info-dumping (though we do get a fair bit of monologuing). The pacing is decent (except, again, for that monologuing) with plenty of action strung together without it just being action without plot. There was also plenty of twists with mistrust of the Luna Cult and then the revelation of the Luna Cult’s splinter group. From that there are still plenty of unanswered questions that beg to be answered in the next book – which is a hook in and of itself.

It does have a couple of moments where I have to say “huh” like an experienced vampire house deciding that restraining their angry werewolves to a wall said wolfies can break is a good idea, or that imprisoning people and then leaving a huge pile of their weapons just outside the cell. They seem small but things like this put the protagonist’s success more in the hands of random chance and enemy screw ups rather than their own planning (or complete and utter lack thereof) and competence.

Kat is a rather angsty character. But it’s quite well done in the sense that it’s rare to have a female vampire be the one that hates their existence. Unlike many other vampires in the genre, she also has a very good reason for her misgivings about being a blood sucking fiend –namely that she is a blood sucking fiend. Being a vampire gives her anger management issues, a desire to hunt and a need to feed on people and kill them. And, yes, the killing does seem to be a requirement. She has good reason to hate what she has become, hate what she is forced to do. An ongoing and very well done theme is her own self-loathing and her battle over who she kills and who she spares, skewering her own justifications for killing and refusing to accept excuses or allow herself to ascribe some kind of higher motives to her actions. I like how this also links into her compassion and her pretence that she doesn’t feel compassion. She views herself as a monster and, more, she views her fellow tainted as monsters. Yet still feels compassion for them, still feels moved to help them even while trying to reject it and them (and, through them, herself).

It’s really well done and if you want to have a vampire who hates what they are, this is the way to do it. But… yes there’s a but. Because this? This is an excellent source of angst. Her brother dying at the hands of vampires… ok, it’s a hard and dangerous world now and having her touched by tragedy fits the grimness of the setting. And her parents were also killed… aaaie we’re getting a bit much now. Oh, and she blames herself for their feaths. Alert! Alert! Angst levels have been exceeded! Step away from the tortured past and put your emo poetry where I can see it!

It was too much, we dipped into the angst well just one too many times. And it was a barrier, especially since there’s not much else to Kat’s character – the reasonable and excellent worries and concerns about being a vampire are intermingled with the rest of the angst to wash away a lot of the impact and a fair bit of the story. It especially hit character building since we were constantly being sucked into Kat’s angst monologue and didn’t have as much attention paid to the rest of her personality or her relationship with Ethan. And I think that really needed developing – who is Ethan as a person and how do he and Kat interact? We needed that I feel, and a little more world building on the nature of magic.

Add to that is her decision making. Normally it’s quite good and she’ll make decisions that are either sensible or, if dubious, based on a situation of having no good choices. But some of her decisions – like approaching the bad guy in a bar without thinking beforehand. Thinking “this is a bad idea” doesn’t really help if you do it anyway. Also, the Taint makes Kat more aggressive – which means I won’t call her short temper Keille Independence, because there’s a story reason for it. But it is… vexing and coupled with everything else it’s making it hard for me to fully identify with this character.

Kat is the only female character in the book, and she needs a lot of development to give her more than her angst, her guilt and her anger as a personality. Those are well worked on, but there needs to be more to her, there has to be more to her, to make her a full person. The other women in the book fill the role of victim – under-aged and/or naïve girls being exploited by her informant, a prostitute she saves from a rapist (and tells the woman to “learn” and make better choices after the experience – judgemental and with little understanding of the conditions that can drive sex worker - especially in this post-apocalyptic world. A lack of understanding that is, if anything, compounded by Kat’s seemingly comfortable income without any indication of how she actually earns it), random back ground victims in vampire lairs or love interest in bars.  There’s one POC in the book, a Mexican (does he carry a flag? I have no idea how she guesses his nationality) member of the Luna Cult who exists only to be angry with Kat and constantly on the very of attacking her and being ripped into teeny tiny pieces by her. There are no GBLT characters in the book at all.

There’s a lot about this book I love and it could easily have been a 4 fang read. But there a just a few things that draw me back from being able to unabashedly adore it. There’s just too much angst and inner-angsty monologue, there’s a lot of erasure, and there are moments in the plot that didn’t work out for me. Some of these are quite small – especially in the plot – but when it all comes together it detracts what could be an awesome book into a good book. But it is a good book and hopefully a good start to a new series.