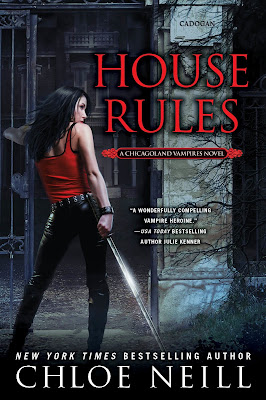 Merit and Ethan have recovered from the chaos that ravaged the city not long ago, but that hardly means things are stable. After a tumultuous vote and far too many demands, Cadogan House is leaving the Greenwich Presidium and being considered Rogue. This is a major and difficult step for the vampires, as they reach out to the rogue community to build new ties.

The Greenwich Presidium itself is not pleased with the defection and is determined to make things as difficult as possible. They’re in town and doing their very best to cause as much pain to Cadogan House as they can as punishment and a warning to others. And from sheer pettiness.

But there are also vampire dying in town – Rogues to begin with but it escalates. With the new anti-vampire administration in charge they can’t rely on the authorities, but nor can they let the murderer continue their killing. Especially since it would solidify their place with the Rogues.

Then there’s the Red Guard. Without the Greenwich Presidium, their resources may be more important to Merit than ever, but how can she handle potential divided loyalty from Ethan?

There was another conflict between Merit and Ethan this book and I’m kind of torn about it. On the good side every part of it is reasonable. Ethan has every right to feel the way he does and to be angry about it. His emotions, his reaction and his beliefs are reasonable and justified. Similarly so are Merit’s, a reasonable person would do what she did, feel what she did and act like she did. The whole argument and resolve between them makes perfect sense and fits neatly with the story, the characters and their relationship.

But, this follows from the last book which had a completely unreasonable and rather ridiculous falling out between them. For me, it meant I was a lot less patient and a whole lot more irritated by this book having another relationship drama – no matter how reasonable – especially with everything else going on. I think it especially grates because Ethan and Merit have only just really got into a relationship – every time we get close to them being settled in relationship mode something happens – Ethan dies, or Mallory cast the spell that messed with Ethan’s head and now this. I want to see a baseline for their relationship without the constant storms, even when those storms are reasonable.

The plot is divided into 2 parallel and unrelated plot lines – though they come together at the end. And I like both of them, though I think they could have actually got going a bit faster than they did – I like the vampire murders and how it both opens both some of the world building in terms of the vampire’s history as well as the nature of vampire creation and how it can go badly wrong. I like the ongoing politics with the Greenwich Presidium, what the organisation means, what it means to House Vampires, what it used to mean and the manoeuvring around the contracts and devious manipulations are great fun. Both storylines also connect strongly with past events, the city’s ongoing loathing for vampires and the GP’s ongoing antipathy for House Cadogan. Both stories also contain plenty of hooks for the next book while still being full resolved as plotlines in and of themselves. It takes a lot of work to make stories so integral to the ongoing meta, not close that meta and still have them fully resolved within the book. I can’t complain about the pacing, the action – any part of it, it all worked.

The one minor point I didn’t like is the way they ended. The storyline I viewed as the more dominant, more important and more focused plotline ended first. It ended triumphantly, it ended awesomely and I have no problems with how it ended. Except there was a whole lot of book left. I felt like the main plot had ended and then we were clearing up a side plot line. To use a gaming comparison – I felt like I’d saved the day, then spent some time killing 10 wolves for the farmer in a side quest. I can’t think how it could have been done differently, but I was left with a sense of “wait, the story’s still going? Didn’t I finish this book?” It’s a small issue, vanishingly small, but it was an issue.

While there was some expansion of history and politics in this book, it was world building light. There wasn’t a lot of grand revelation of supernatural powers – which I think worked. The last book was crammed with world building and shifters and magic and angels and all sorts – there was a lot there, a lot to digest and it was a little overwhelming. I think this book was a good recognition of balance by not adding to the pile until what’s already been heaped up is more assimilated into the story. It shows some excellent series pacing, not just book pacing.

I think the series has also taken some steps to make the characters more mature. One of my ongoing complaints with this series was that these ancient vampires – and even just the adults – behaved like whiny teenagers, it has vastly improved. We do still have some problem with Merit pointing out the blatantly obvious and being praised for her genius, but that has improved as well. But this is the best I can say about Merit and co - they've stopped one of their more annoying habits. But this is now book 7 in the series and this is the most I can say as far as character growth - which is a problem. I don't dislike the characters, I don't have a problem with any individual character - but after 7 books they should have grown. They should have changed. They should have developed. Merit in book 7 is the same Merit in book 1.

We still have some very high quality snark which always appeals to me.

I like Merit, she is a character who is a fighter, but she is more than just a fighter. Even as a capable fighter, there are people around her who are as dangerous or more so – in fact, compared to other vampire books out there, these vampires are surprisingly under powered. She is someone with a complicated past, strong friendships, strong opinions and passions above and beyond her love interest and battle (books and food – and these books really make me hungry for the most unhealthy food imaginable).  She also has some powerful friendships with  Lindsey and Mallory who have some depth to them albeit they’re not touched on in great detail in this book, they’re more a passing reference. In fact, by far and away Merit’s closest helpers/friends/etc in this book are Jeff, Ethan and Jonah.

And in her relationship with Ethan she thoroughly resists any attempts to dominate or control her – even with him boss of the house as well. Even in the bedroom when they’re playing fun games she’s very quick to say “I don’t perform on command” and never ever lets him easily pull rank, as it were.

This is all very good, but there’s also a downside. Merit – and her friends – are cut from a similar cloth. Mallory is quirky, Merit and Lindsey are more rough and ready fighters and guards. Then we look at the nymphs –interested in clothes (revealing clothes as we’re often reminded) and shoes and having big dramatic, ridiculous fights and then fawning over Jeff. They’re fickle, vain, silly, irritating and child-like. Then there’s Lacey, the fashionable, stylish, beautiful and extremely image conscious vampire who is determined to have Ethan for herself and desperate to attack, discredit or otherwise remove Merit so she’s out of the way. Two isn’t a pattern by any means, but it is a larger pattern in Urban Fantasy – where you have strong female characters who are good with weapons, touch and don’t give a damn about make up and clothes contrasted with evil, vapid, or weak women who do care about those things.

There are still some major problems with minorities in this book. There are zero GBLT people, which is a major ongoing habit. There are very few POC  - and those that there are (Malik, a background 2nd in command we hardly see, Lakshmi, a GP member who they have contact with since she has a crush on Jonah and Delia, a doctor in Cadogan House who barely has a speaking line) have very very minor roles.

This is compounded by the amount of appropriation that the book has. It’s not as bad as some of the previous books, but we still have supernaturals “coming out of the closet”, anti-vampire prejudice being called “racism” and even a moment when Merit expresses shock at just how extreme McKetrick’s hate is in the media, when it’s really not any more severe than what is commonly said against minorities already. There’s lots of using marginalised issues and oppression without actually including or acknowledging the actual people who face these oppressions. And she really really really need to stop using the word "lame".

This series continues well and several elements I found problematic or annoying seem to have got a little better as this series has progressed – we’re moving up as we’re moving forward, but not much. This is definitely a series I will keep on reading and I will the next book. Still, there are a couple of things that keep it as a series I will enjoy reading and am happy to read each new addition, and a series that I’m desperately looking forward to.