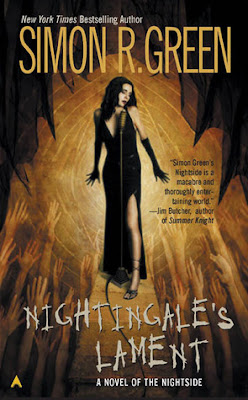 John Taylor has a new case – to rescue the Nightingale. A singer whose voice is so incredible she may be the next big thing in the Nightside where the incredible is the norm. A singer whose sad songs can literally cause people to kill themselves in grief – a fact that only adds to her popularity, not detract from it.

And a singer who may be being held against her will. At least, that’s what her father thinks.

Which sets John Taylor on track to speak to and free the Nightingale – but the Cavendishes, her handlers, managers or owners, guard their prize jealously and have the vast power and influence to ensure that even John Taylor can’t just walk in the front door and make demands. A chain of investigation follows, tracking down what the Cavendishes have done in the past, and discovering exactly what they have done to the Nightingale.

To complicate things, John has upset the powers that be. A necessary act of revenge against the murderer of an old and valued friend has caused a large section of the Nightside to lose all power. The Authorities are not amused and wish to speak to John about it – and they’re quite insistant.

I am rapidly becoming unstuck trying to review these books. It’s difficult because I don’t have a lot of praiseworthy things to say about them. But I love them.

Which is a ridiculous contradiction, but it’s true.

The story is good – very well paced, well written, extremely exciting  and with very well done action scenes. There are no twists though, no surprises that can’t be guessed well ahead of time. It’s somewhat predictable, we know how it’s going to end, we know who the bad guys are, we even know their super super secret that was very obvious from the very beginning.

Yet, it was good. It was predictable, I knew exactly how it was going to end – and it was still immense fun. Sometimes the journey doesn’t have to be surprising to be a fun one. It can still be exciting, still be fun of excellent fight scenes, still have some wonderful and enthralling settings and developments to keep you turning the pages. Even without twists and surprises, the story was compelling and enthralling. Even with the dramatic villain monologues – repeated dramatic villain monologues! In fact, it says a lot about the writing that it can make so many of these tropes that you shouldn’t ever do in writing work. Hard boiled film-noir-ish internal monologues allowing the protagonist to info dump? Yes we have lots of that – and it’s excellent and it works and I love it. Over the top villainous exposition “since I’m going to kill you anyway let me explain all my nefarious schemes!?” yes it’s there, lots of it – and it’s excellent and it works and I love it.

The protagonist, John Taylor, is pretty hollow. He’s a power fantasy – super charged, stare-‘em-down, show everyone who’s boss, power fantasy. And he’s a really good one. It’s hard not to have a little fun with him staring down major powers, with everyone flinching at his name, with him avenging his friends no matter the cost and with him kicking an ogre in the balls. It’s fun, mindless, power fantasy fun. But fun nevertheless. Sometimes some simple mindless fun is exactly what the doctor ordered. I honestly can’t point to any real defining characteristic of John than this – he’s got a nebulous history, he has this whole hard-boiled-film-noir-stereotype thing and vast amounts of power and hardassery over the classic heart of gold. He’s a walking stereotype, he’s a cliché writ large – but I really like him.

It’s all a classic example of how there are no rules to writing if you can do it right. If you’ve got good writing, you can make even the cheesiest clichés work.

Ultimately, what really makes this work is the world. This glorious, amazing, incredibly diverse world. The sheer imagination that has gone into creating this vast cast of the weird, wonderful and terrifying is stunning. The Nightside contains everything imaginable and it’s [portrayed so perfectly with that. Everything is weird, there are not only examples of every creature from every mythology and story you can think of, but also creatures and beings that go way beyond that but by mere existence expand the world even further.

But it’s not just an excellently portrayed world of vast and imaginative possibilities that I really really love, it’s also incredibly creepy. Sometimes overtly with some really well done writing that describes a setting or creature that gives you chills. I can’t praise the writing enough here, it’s ability to truly give a sense of the powers of the Nightside but also that constant creepiness. There is nothing fluffy or nice or safe here. And with just a line of dialogue – just Mr. and Mrs. Cavendish talking to each other, that creepy is really really clear. The book is just supremely atmospheric and, with such a fantastic setting, I’ve never known a book give me such a strong sense of time and place. Even the prologue where John Taylor investigates the power plant gives such a strong sense of time and place – it doesn’t matter what the consequences are, it doesn’t matter how damaging it is, he can’t leave his friends like this and he can’t allow himself to be used and betrayed in this fashion.

But in among all this weird and strange we have a really major problem that has been building for the last 2 books and this one really splashed over.

GBLT people and gender non-conforming people are used as a further example of the weird. In the past it was lesbians used to add an extra soupcon of weirdness. In this book we have crossdressers, drag queens and actual trans people. You can’t miss the context here – the book constantly describes the weird, the odd, the completely mind bogglingly strange – and then throws in men dressed as women as further example of this. And it does it with an abundant and horrendous usage of the word “trannies”. It was an extreme example of slur abuse and just added not just to the prejudice but to the greater sense of “lookit how weird everything is”.

In terms of other marginalised people – there are pretty much no POC. Which means we have another book full of magical diversity but not actual diversity. We do have female characters who could be strong – but they’re so underused. Nightingale is the prize to be won and she does make some efforts to free herself and isn’t excatly a helpless damsel, but she is a damsel. His secretary seems to be several kinds of awesome but, again, doesn’t really take up any more than the tiniest bit part (not compared to Dead Boy, or even Pew). There’s a reporter who, again, looks like she could be a really interesting character – but has only a teeny tiny part.

In 3 books the only strong female character who has had a sustained part to play rather than a minor role has either turned evil or been Shotgun Suzie – who was revealed as vulnerable and hurting and needing John to help patch her emotional wounds.

On book 3 of this series, and I think that the Nightside series is going from a pleasure to a guilty pleasure. I love these books, I pick one up and I can’t stop reading until the end. The stories are predictable, the protagonist a grand power fantasy and there’s a shed load of tropes that make me cringe.

Yet… I love it. I smile every time I pick up one of these books and I love nearly every second of the reading. It’s a guilty pleasure, alas.