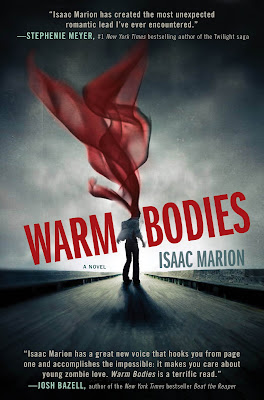 R is a zombie – and he’s called R because it’s the one fragment of his name he has managed to remember. He and his fellow zombies follow the parodies of the living, aping human life but never really getting the reality of it. In between raiding the living to find food and, above all, brains – brains that contain the precious memories of the living that reignite what it means to be alive in the zombies. He lives in the airport, in his plane with his collection of human memorabilia and 50s records trying to reignite his humanity.

On one such raid he eat the brain of a man called Perry – and his brain lit up. He saw Perry’s girlfriend, Julie, and was driven to protect her rather than eat her. He brought her home to his plane and slowly they come to know each other. But, more, R sees more and more of Perry’s life and Perry’s memories, reliving his hopes and dreams – and his descent. The longer he and Julie spend together, the more R begins to wake up, the more he can remember and talk and think. The more alive he feels

And this vitality is spreading – but the Bonies, the most rotten and reduced of the zombies, are ready to fight back

This is a book that’s surrounded by some truly confusing marketing. When I picked it up, I was told by all and sundry that it was another Twilight. I cringed, expecting a vapid, personality-less heroine and a creepy, stalking hero who was supposed to be romantic.

I watched the trailers for the Warm Bodies film and expected a comedy, something funny and light and clever and amusing.

This book is not a comedy, nor is it light.

This book is surprisingly deep, amazingly solid and full of extremely powerful food for thought.

This is a dystopia, but unlike many dystopias, this is not decades after the end of the world, nor is it mere weeks. The remains of humanity aren’t in a desperate second by second battle for survival, nor have they built much in the way of a new society. Humanity is surviving. Day by day, in their secure centres, surviving with little or no real hope for an actual future. Everything is about survival, killing the zombies and surviving. Anything else is a distraction, it’s grim, it’s hard and General Grigio doesn’t accept any deviation from that, not even from his own daughter.

Then there’s the zombies, feeding on human brains for some spark of human emotion, trying to recapture some sense of what they were, unable to even pull up their own names, their own identities. They’re trapped in bodies that find so many tasks and even basic communication difficult, but also find even caring to be beyond them. Lead by the Bonies, rotted down zombies that are the very essence of stagnation and inevitability.

We see this really well portrayed several ways – with Julie’s difficulty with the stifling and repressive and empty life they live in the stadium. We see it with R’s slow growth from his near-mindless zombie state. And we see it really well through the eyes of Perry’s memories, as he grew colder and harder, as he lost his hope, as he began seeking death and how, ultimately, he became a dead man walking – as much a zombie as R was before he began to reclaim the spark of life.

We have a lot of really powerful scenes that come together to really carry the messages of the book. The children in the stadium being taught how to kill zombies, contrasting with the zombie children in the airport being taught how to eat humans. The zombies going through their parodies of daily life, faking marriages, families even sex, all going through the motions without meaning. Nina talking to Julie and asking what the point is of having kids since they have so few resources. We have these constant small scenes, each of which builds the full picture of the book.

We don’t have a lot of characters in this book and most aren’t well described, but Julie’s friend Nina is a Black woman and she describes one of the fallouts of the dystopia has been completely losing touch of culture and heritage and history as a result of focusing on survival to the cost of all else.

I also love the implied but ongoing theme that the dystopia isn’t just a cause of the zombies – but of humanity’s own loss of focus on what matters, of greed and pride and pettiness and rigidity. We see the overt of this, they talk of wars and economic collapse and environmental devastation that seems to have brought humanity to its knees long before the zombies rose. There’s even a suggestion that humanity’s descent is what caused the zombies to rise in the first place – something that can also be seen with General Grigio.

Is it an easy read? I wouldn’t say so. It’s a book that requires – that demands – a lot of thought and consideration. It demands analysis and for you to chew other the ideas it raises. The writing itself is extremely well done and takes you forward well but the issues it raises means it will never be something you can read while half asleep or skim read. It also has a lot of monologues and inner reflections from R. That’s not necessarily a bad thing, if anything it emphasises how much inner thought he has, how much he can still think and reason, even while he has trouble caring and even more trouble expressing himself. We almost have a mind trapped within the zombie body. Still, while these are important for thematic reasons and world building reasons, it does mean we have large sections of text that are basically internal ruminations that, while providing important elements of the book, don’t help it keep moving forwards at a great pace.

It’s an excellent book on many levels – I definitely recommend it, but it’s not light reading.